A study by DataLabs By Inc42 on the data provided in the mentioned economic survey concluded that education is among the top five fastest-growing commodities in terms of private consumer expenditure. The compounded annual growth rate (FY12 TO FY16) of expenditure on education-related products was 6.3%, relatively higher than food and beverages (4.1%).

All these numbers indicate that the demand for education-related products and services in India is poised to be steady in the coming years as well and the opportunity to capitalise will keep growing. In 2019, the total market size of education in India was estimated to be $101 Bn, which is a 10% growth compared to the previous financial year. In addition to robust demand, the prevalence of internet and smartphones in the country has expanded the reach of quality education beyond the urban regions. Edtech startups have been at the forefront of this technology revolution in India — between 2014 and 2019, the total capital inflow across Indian edtech startups was $1.8 Bn, growing at a CAGR (2015 to 2019) of 47%.

Test preparation remains the catalyst in this regard for the education market, given the huge student population of the country and the high demand for university admissions and jobs. This has greatly increased the opportunity to monetise in this edtech sub-sector.

The demand for a reputable degree in the country was best encapsulated by Jai Prakash Narayan(Indian freedom fighter) in his quote — “I have been appalled to find that only a small percentage of our students today are charged with a sincere desire for knowledge and skills. The rest want nothing more than a degree, which is prized not for its educational but commercial value. A degree for most student is a mere passport to employment.”

The Wild West Of Online Test Prep In India 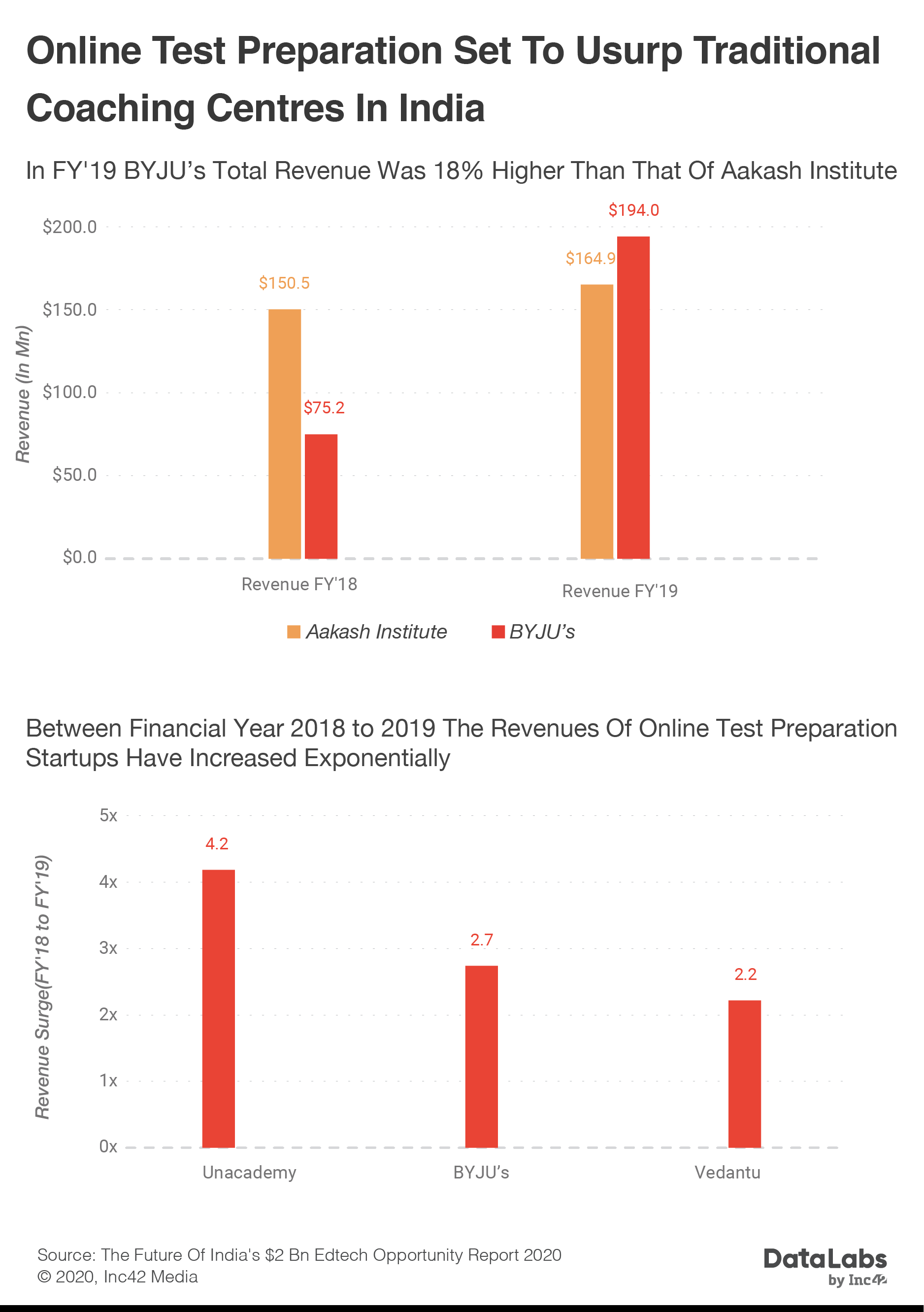 Although the demand for coaching/private tuition is higher throughout the K 12 education among Indian students, it gets extremely intensified after students reach the senior secondary level (Std XI to XII).

Going by the numbers released by the CBSE (Central Board Of Secondary Education), a total of 1.1 Mn students appeared for the senior secondary examination in 2018, out of which 918K passed (83%). The number of students registered surged 18% in 2019 compared to 2018.

In the pre-2015 era, the traditional coaching centres such as FIITJEE, Akash Institute, Vajiram & Ravi along with others enjoyed the upper hand in capitalising on the test preparation demand of the country. Students from all across the country came to study in these coaching centres, the migration of students from semi-urban and rural regions of the country was primarily driven by the quest to excel in examinations and the belief that a top-notch coaching centre would deliver these results.

However, the success of such centres is determined by lucrative marketing campaigns just as much as the track record of the coaching centre. Another important thing to notice is that in 2015 the total number of internet subscribers in the country was a mere 267 Mn out of which 34% (92 Mn) were rural. Delivery of online education beyond the urban boundaries was a distant dream in the country.

The widespread penetration of the internet along with smart devices in the country has increased the addressable market for various consumer internet businesses. At the end of 2019, the total wireless internet subscribers in the country was 665 Mn, whereas the subscribers hailing from the rural regions stood at 248 Mn, a 2.7x surge compared to 2014.

The result of this is quite evident in the test preparation space — in FY 2019, the total revenue of BYJUs ($194 Mn) was 18% higher than that of Aakash Institute ($165 Mn), one of the leading coaching centres in India. Surprisingly, in FY18, Aakash’s revenue ($150 Mn) was 2x that of BYJU’s ($75 Mn). Apart from the revenue generation, the bigger question remains — are these online test preparation startups actually more effective than their predecessors?

The Art Of Persuasion: Triggering The Consumer Impulse 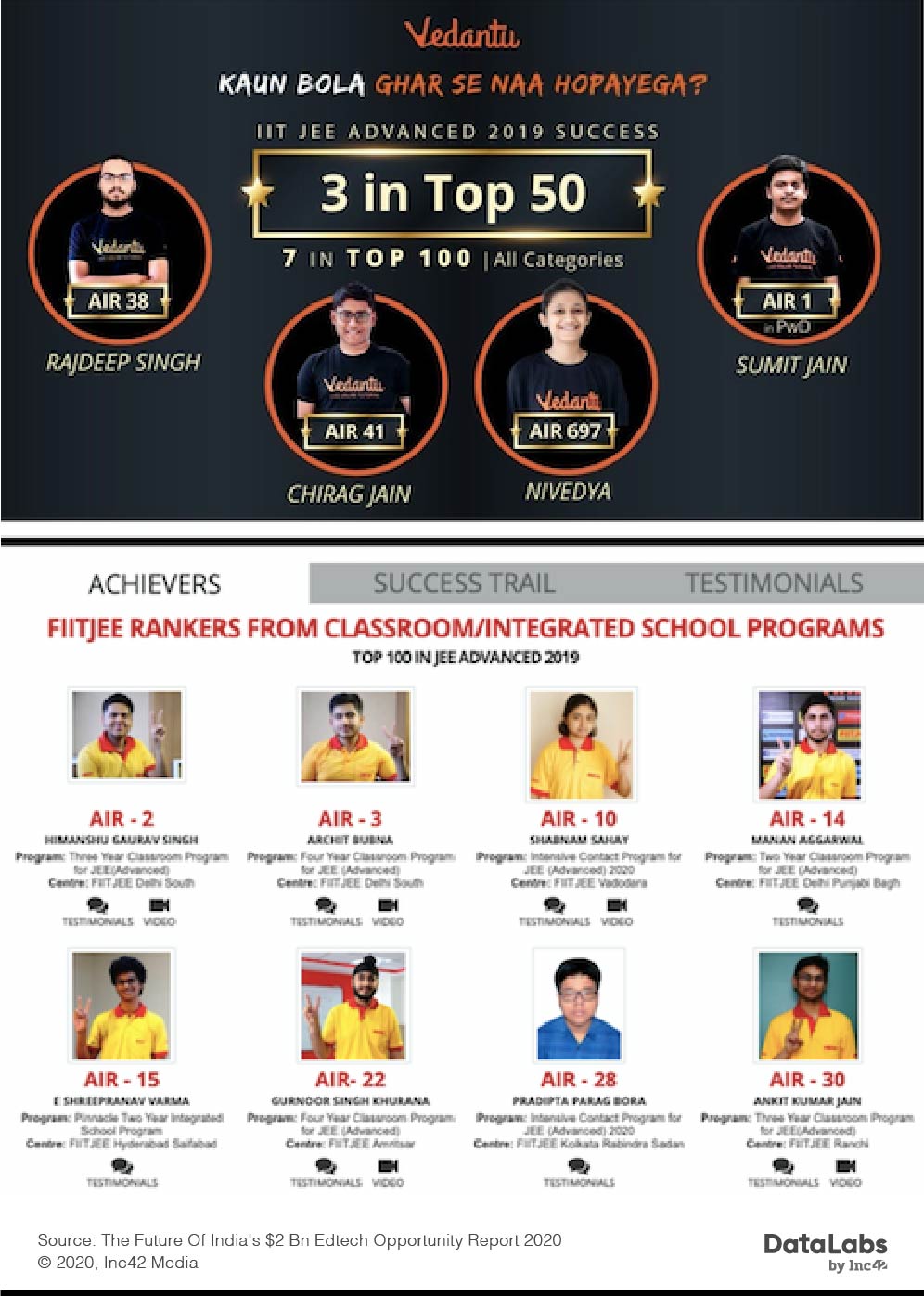 While the effectiveness of test preparation startups over coaching centres remains a mystery due to the unavailability of credible data in relation to their efficacy, one thing is certain — a lot of their success is down to clever marketing campaigns. Similar to coaching centres of old, which mastered the art of persuasion by highlighting top-rank holders of various national-level examinations in ads, online test preparation startups are going in this direction well, but in the digital sphere. Highlighting the success of the students is proven to be a major influencing factor in the purchase decision. 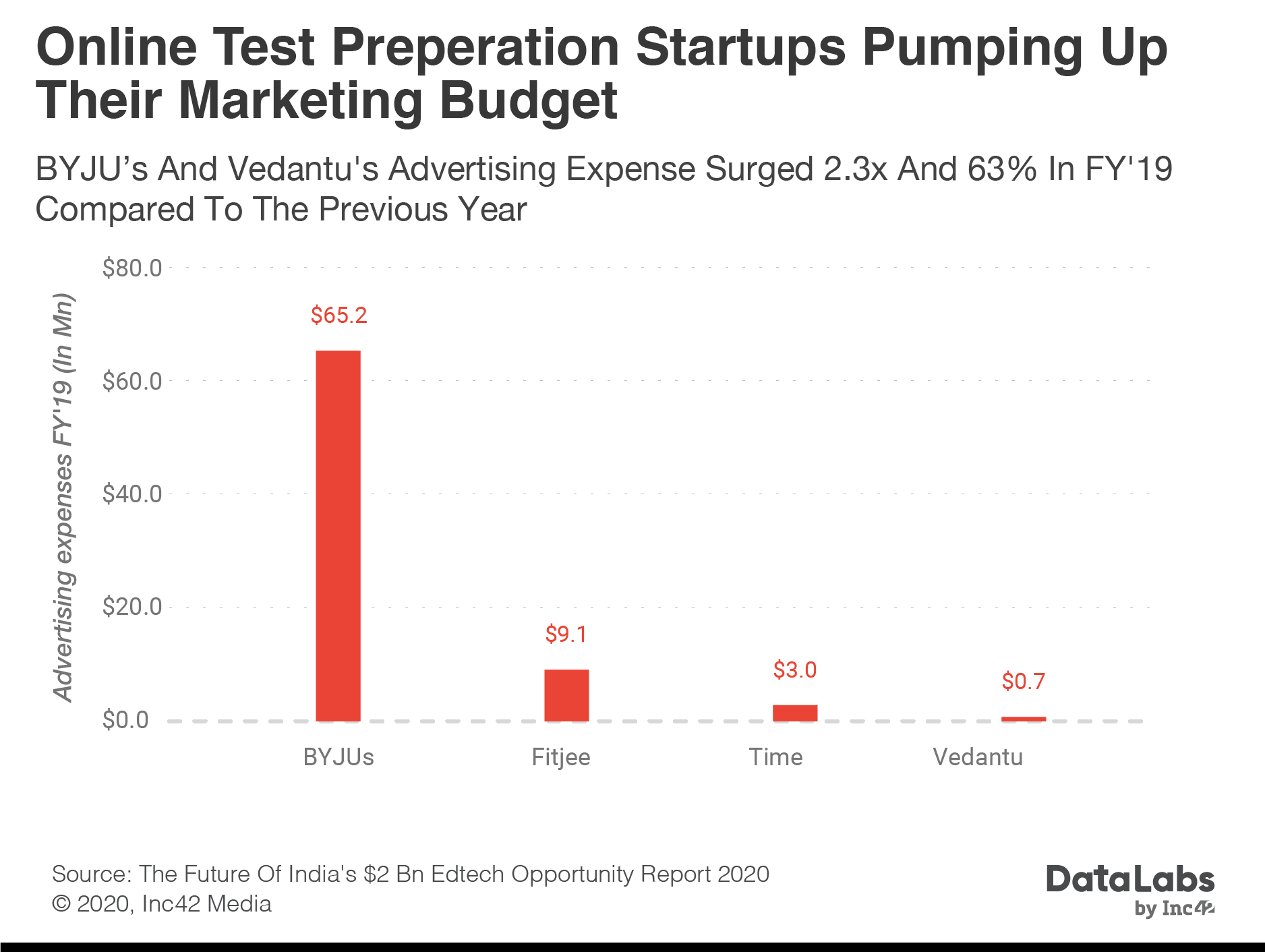 Unlike online test prep startups, traditional coaching centres are relatively more thrifty on their ad spending in recent years. During the same interval, both FIITJEE and TIME, two of the leading coaching centre operators in India, witnessed a decline of 24% and 6.7% in their advertising and promotional expense. In the case of FIITJEE, the ad spend declined from $3.1 Mn in FY18 to $2.9 Mn in 2019, while TIME cut down its ad spend from $11.9 Mn (FY18) to $9.1 Mn in FY19.

Where Is Skill Development In The Picture? When one looks beyond the technology advancement in the country, the menace of skill deficiency is visible across all levels, from classrooms to the job market. A study by DataLabs on the data provided by Stones2Milestones, an edtech startup which focusses on developing reading skills among Indian students, concluded that advanced reading skills of Indian students are decreasing as they move in higher standards. In standard six, only 2.9% of the total participants displayed advance reading skills compared to 12.5% in standard fourth. Clearly, online test prep does not improve comprehension and reading skills as claimed by many. 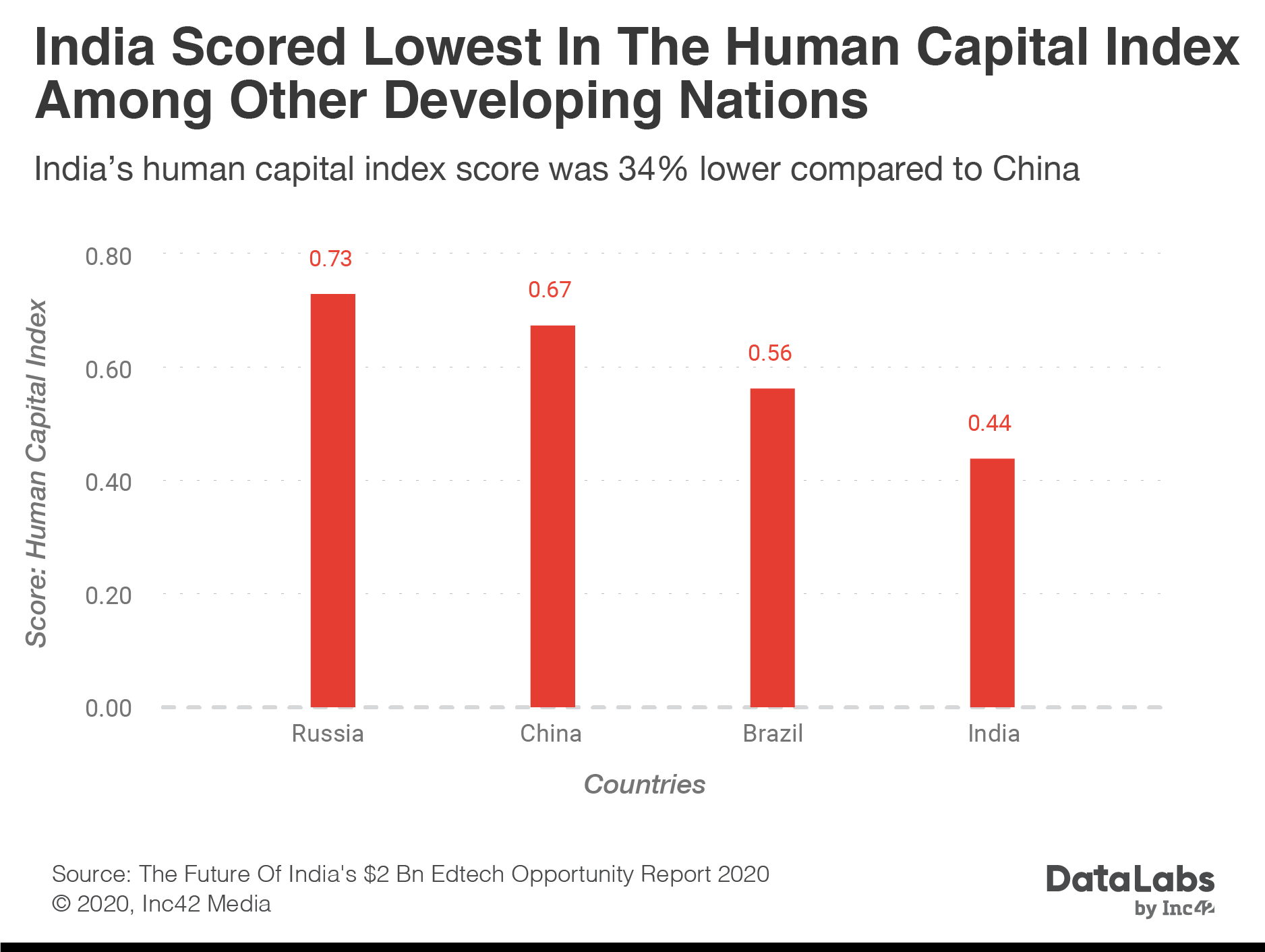 Coming to the employment side, the value creation of the Indian workforce is relatively lower compared to the world average. As per DataLabs analysis of data provided by ILO (International Labour Organisation) India’s output per worker was 49% lower than the world average. In addition to this, the human capital index score (measured on a scale of 0 to 1) of India was 0.44 much lower compared to that of China, Russia and Brazil. So while India has the population advantage, the skill development index is not good enough to take advantage of it, and this is a grave problem in the Indian context.

Despite numerous efforts by both the private and public institutions the awareness about skill development still remains low among the Indian public. The priority is always towards certification and degrees, thanks to which the demand for products and services related to skill development and reskilling have remained low. The impact of this is vividly evident in the capital inflow too, as highlighted in DataLabs by Inc42’s The Future Of India’s $2 Bn Edtech Opportunity Report 2020.