Is Diversification The Answer To MobiKwik’s Sustainability Question?

Is Diversification The Answer To MobiKwik’s Sustainability Question? 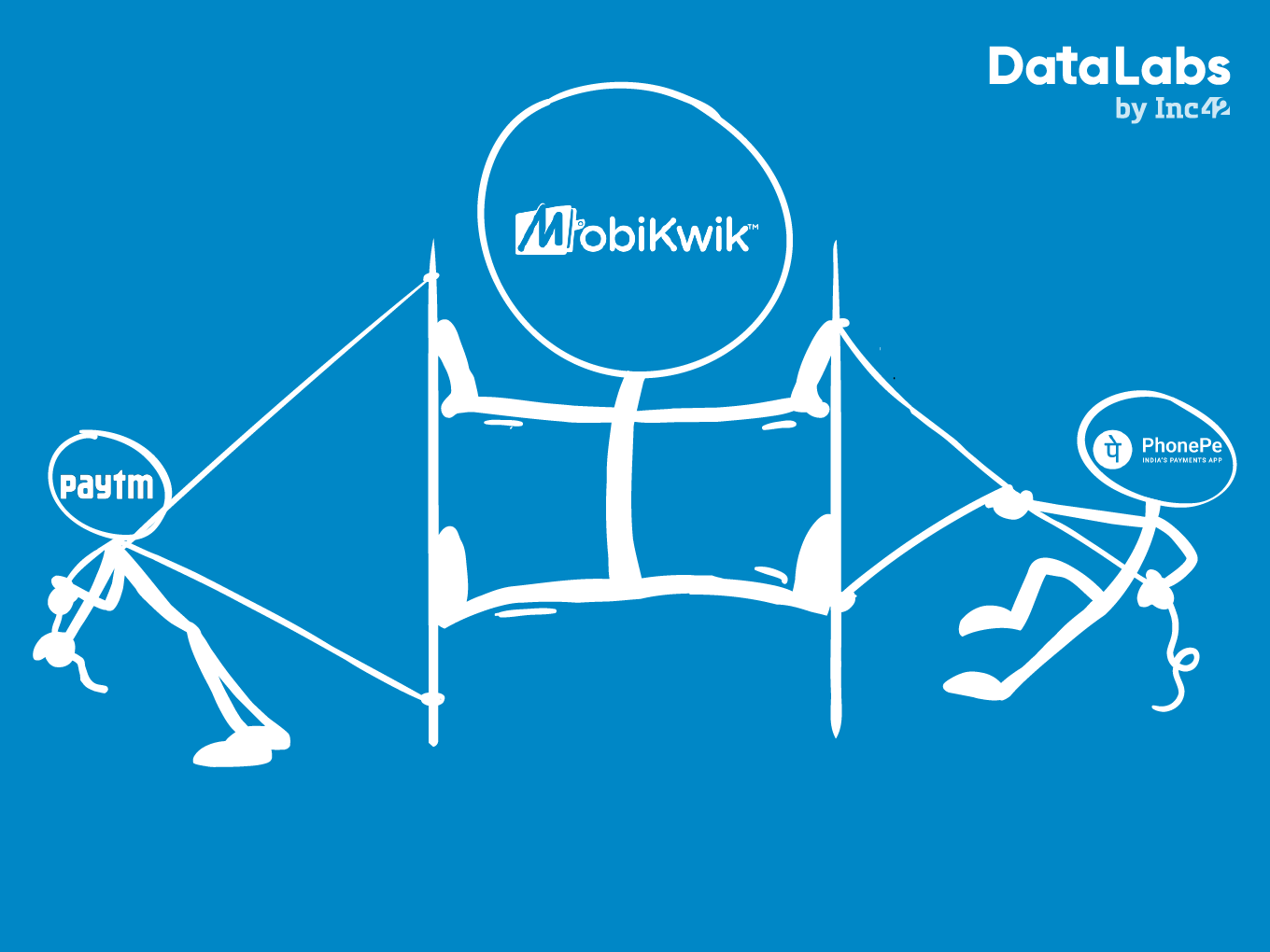 As of October 2019, MobiKwik has over 107 Mn registered users, 3 Mn merchants and 200 billers on its platform

MobiKwik reportedly turned profitable at a unit level before deduction of taxes, depreciation, and amortization In FY2019

MobiKwik is placed behind Paytm, PhonePe in the market with an average transaction size of ₹1,141.6 for March 2019

An early mover in the mobile wallet segment, MobiKwik finds itself fighting a battle on two fronts. On the one hand, it has to take on homegrown rivals Paytm and Phonepe. On the other end are deep-pocketed global giants including Google Pay, Amazon Pay and WhatsApp Payments. Facebook, Uber and others are also entering the payments arena.

MobiKwik has been fighting this two-pronged battle for years, but the question is how long will it be able to sustain?

Founded a decade ago in 2009 and with the backing of the likes of Sequoia Capital, American Express and Bajaj Finance, MobiKwik stood its ground for long as a payments-only service, before moving into other verticals. Paytm went from wallet to payments gateway to payments bank to an investment platform, while Freecharge was absorbed into Axis Bank, Citrus Payments got acquired by PayU.

A Google Trends comparison between MobiKwik, PhonePe and Paytm showcases how the popularity of the Gurugram-based MobiKwik has fallen among those searching in India.

This dwindling situation took a turn for relief when MobiKwik reported a gross revenue of INR INR 184.6 CR in FY2019 and being operationally breakeven. This change in its trend of pilling losses came with the diversification of its products and services.

In May, MobiKwik reported gross revenue of INR 184.6 Cr in FY2019 in its latest annual report (not filed with the registrar of companies yet), more than twice its previous year’s income. It claimed its total registered users grew 40% and monthly active users (MAUs) grew 90% over the period. This is a milestone very few of its local rivals can even contemplate.

However, to get to the path of profitability, MobiKwik has made a number of significant changes to its business in recent years. It stopped participating in the race to aggressively acquire users and fighting with heavily-backed rivals such as Paytm, which has raised more than $2 Bn to date.

Instead, it focused on diversification of its services.

In November 2018, MobiKwik launched digital life insurance on its app in association with ICICI Prudential Life Insurance Company. It rolled out a first-of-its-kind group microinsurance product.

The offering begins with a life cover of INR 1 Lakh available for a monthly premium as low as INR 20. The users have an option to choose from three sum assured policies: INR 1 Lakh, INR 1.5 Lakh and INR 2 lakh, available against monthly premiums of INR 20, INR 30 and INR 40 respectively.

MobiKwik in May 2019, reported INR 362 Cr in GTV (gross transaction value) in IMPS fund transfer category for the same month. It observed a 400% growth in its funds transfer business in the last year with a GTV of INR 4,344 Cr.

IMPS or Immediate Payment Service is an inter-bank electronic fund transfer system.  According to NPCI (National Payments Corporation of India) data, MobiKwik holds 26% of the transaction market and had clocked INR 362 Cr in terms of the value of total funds transferred from its wallet to bank.

In October 2019, MobiKwik announced the launch of its breakthrough product called ‘Boost’, that offers instant loan approval and disbursal to users.

As new format of credit disbursal product, ‘Boost’ disburses loans of upto INR 60K in a matter of 90 seconds.

MobiKwik has partnered with a number of NBFCs to offer this service to its users. MobiKwik has become the first wallet player to disburse loan amount in the user’s mobile wallet.

‘Boost’ offers loans without any hassles of submission of paperwork or collaterals. The loan sanction decision will be taken in 30 seconds, on the basis of a proprietary risk scoring model called ‘Mobiscore’.

MobiKwik users who get loans via the app have the option to transfer their loan amount to their bank account. This is set to enable success in merchants and micro-entrepreneurs who could not avail loans from banks and NBFCs.

Its ‘Smart Portfolios’ feature is a fully automated investment advisory service designed to make investing easy for novices and experts.  Prior to the acquisition, Clearfunds already had close to $45 Mn worth of Assets Under Advisory and its platform gave clients access to over 3K direct mutual fund schemes across all 36 mutual fund companies and four registrar and transfer agents (RTAs).

In June 2019, MobiKwik partnered with DT One, a payments network headquartered in Singapore, to enter international markets with support for mobile top-ups in more than 150 countries, according to a company statement.

This move will enable international mobile recharges (topping up credit to a mobile account) with a single tap, and rewards and airtime credit services across 550 mobile operators in over 150 countries in the Middle East, Asia Pacific, Europe, Africa, the United States, Latin America and the Caribbean.

Top level Exits Should Be A Concern

In February 2019, MobiKwik chief strategy officer Mrinal Sinha quit the company amidst high growth registered by the company in the financial year 2019. The departure of a top-level employee is always a concern for the company.

The churn at MobiKwik’s top leadership for the last two years has been no secret. In November

2018, MobiKwik shut down two of its offices, laid off several employees, and scaled back its retail business.

Chief business officer Vineet Singh and VP of marketing Akash Gupta quit the company in 2017. This was followed by Daman Soni (CMO), Vivek Sinha (retail head), Rukaiya Rangwala, the head of the payment gateway and online business, and Rohan Khara (chief product officer) who all exited in 2018. The CRO Puneet Agarwal, also left six months after joining earlier this year.

Can MobiKwik Sustain Its Run?

While MobiKwik was perhaps the second-largest mobile wallet provider after Paytm for years, with the launch of unified payments interface (UPI) in 2016, it has been overtaken by PhonePe and Google Tez. The Reserve Bank of India’s know-your-customer mandate has affected transaction volumes for pure mobile wallet providers. MobiKwik joined the UPI bandwagon only in April 2018.

Demonetisation was the catalyst that marked the exponential growth of Paytm, helping it grow by leaps and bounds. While that forced entities like Citrus Pay and Snapdeal-owned Freecharge to exit the standalone mobile wallet game altogether, MobiKwik held on.

The intensity of the competition in the digital payments market has made investors wary, especially in the domestic market. Big cheques in India are largely being written by Chinese, Japanese and US-based funds.

The nature of MobiKwik’s business has caused the industry to question the company’s long-term sustainability prospects. In the mobile payments space where consumer choice is driven by the best deal rather than by user experience, customer acquisition is an expensive game.

Diversification seems to be a good call on MobiKwik’s part and things seem to be looking up as per its FY19 revenue stats and growth observed. Whether it can hold its own on all the diversified fronts is another matter and one to be discussed perhaps a year down the line.