In FY2019, the aggregate revenue of Indian origin horizontal SaaS startups stood at over $518 Mn, which is a 27% surge compared to the previous year.

Will the likes of Zoho, Freshworks, CleverTap, Wingify and others be able to latch on to the pandemic-induced market opportunity in the SMB sector?

India’s SaaS ecosystem has come a long way since 2014 and given the pedigree and calibre of the IT services industry that created the SaaS wave, this must come as no surprise. But while so far, SaaS giants such as Zoho, Freshworks, ChargeBee, Deskera, CleverTap, Postman, Icertis, Druva and others have so far built their bases around international enterprises and clients, the focu in the post-pandemic world is on Indian small businesses. With digital penetration among SMBs also rising along with consumers, the floor is set for SaaS startups — particularly horizontal SaaS models — to tap the vast Indian market.

Backed by rising investor interest, India’s SaaS ecosystem is poised for a golden moment. In 2019, for the first time ever enterprise tech startup funding crossed the billion-dollar mark with the total funding of $1.03 Bn. A whopping $809 Mn of this was invested in horizontal SaaS plays or startups that offer SaaS products that seek to solve a specific use-case within companies. The model, which covers areas such as accounting, sales, marketing and HR, aims to cover a wide swathe of the market, and target different industries.

Covid-19 forced millions of businesses in India to shut down temporarily or curtail their operations. Some moved to remote workforces to tackle the restrictions on movement and social distancing. This has expanded the addressable market for horizontal SaaS solutions greatly, since any company that did not use a suite of software to manage its operations is now a potential target. SaaS startups in the space of offline-to-online (O2O) marketing and enablement, enterprise resource planning (ERP) and customer relationship management (CRM have a golden opportunity in India.

In many ways, the pandemic was the inflexion point. As per a recent survey by CII, the complete shutdown of operations identified as the biggest business constraint due to Covid-19. In recent times, multiple SaaS companies from India and around the world have shown confidence in Indiaʼs vibrant SMB ecosystem and have been offering solutions to help them survive and thrive.

Some of the key startups in the horizontal SaaS space include Zoho, CleverTap, Wingify, Freshworks and Deskera. The market confidence towards the Indian SMBs for SaaS solutions has increased with even the government bringing many of its departments online, which forces the SMBs working with them to also digitise their operations. This is highly likely to translate into higher revenues from the Indian market for SaaS companies and break their dependence on the Western market for scale and growth. 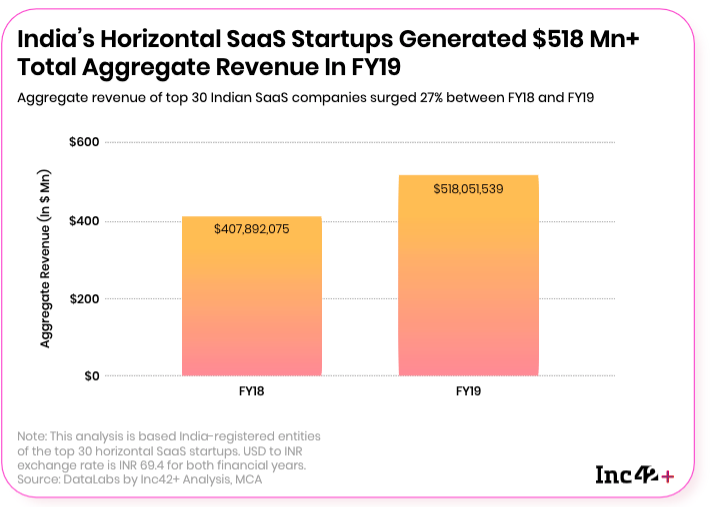 As part of the latest DataLabs by Inc42+ report “Opportunities For Horizontal SaaS In India’s SMB Market 2020”, we have formulated the aggregate revenue for India-registered entities of the top 30 horizontal SaaS companies which account for over 80% of the total domestic market. 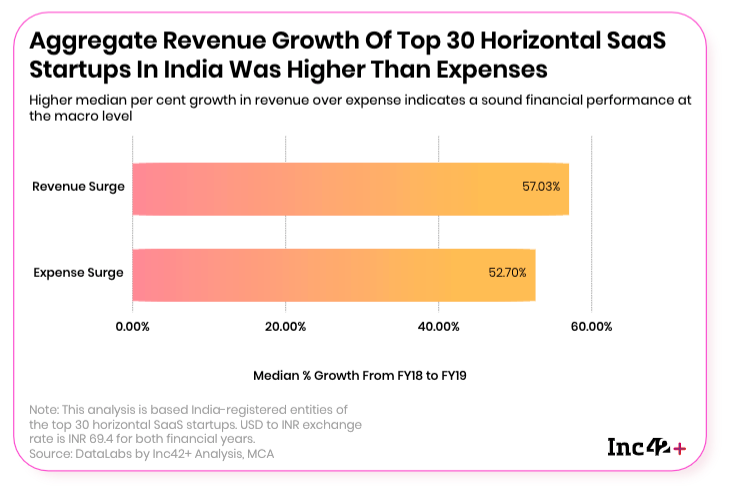 Furthermore, the median revenue surge for India-registered entities of SaaS startups was 57% from FY18 to FY19, which has outpaced the 53% growth in median expenses. So in fact, SaaS startups have had sound and sustainable unit economics over the past two financial years, which has allowed them to further iterate on the products, create moats and achieve scale without stretching resources.

Zoho vs Freshworks: The Battle Between India’s SaaS Giants 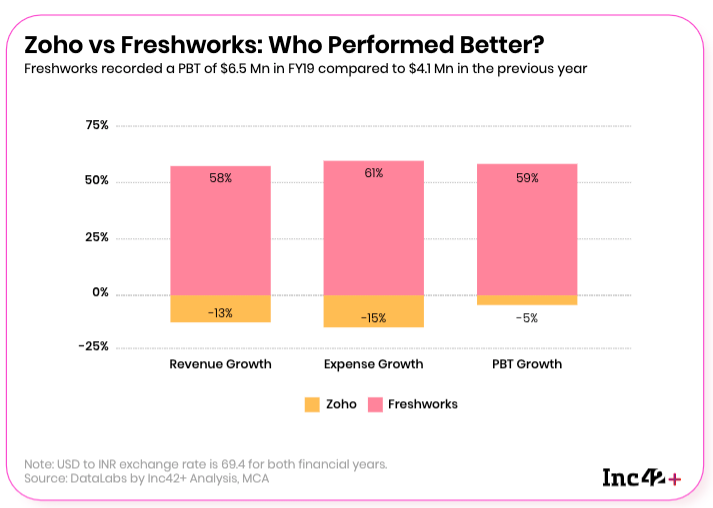 Among the two poster boys of Indian SaaS ecosystem, if we look at the financial performance over the past two fiscals (2018 and 2019) Freshworks definitely has had an upper hand. The Indian entity of the company recorded a total revenue growth of 58% and PBT (profit before tax) surge of 59%, compared to Zoho’s decline of 13% in the revenue whereas as 5% in the profit before tax.

The market competition between Freshworks and Zoho has also spilled over into an ugly courtroom battle. In March this year, Zoho filed a lawsuit alleging that Freshworks stole confidential information and built a business out of it. Will this lawsuit have an impact on future revenue and distract these two SaaS behemoths? 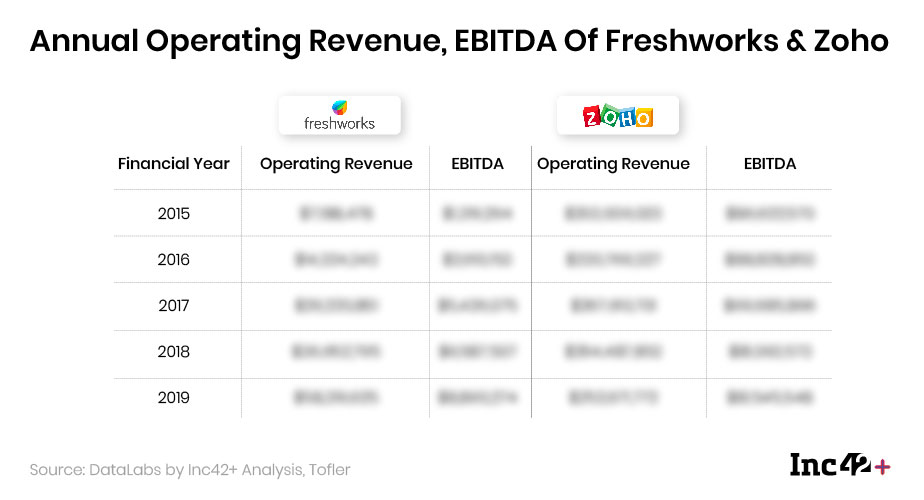 It’s been said many times in the past — small and medium businesses are the most crucial pillar of a nation’s economy. Some say that the ease of doing business and scaling it in the local community has been a key factor in the economic might of the US. In developing countries where the reach of corporates is proliferated to selected urban regions, small and mediums enterprises play a vital role in uplifting commerce, employment, economic productivity among the non-urban regions.

Despite such significance to the economy, SMBs do not enjoy modern luxuries such as access to formal finance, new-age tech-enabled business solutions and others — at least not so far. A study by the World Bank concluded that the global formal finance gap among SMBs world over was a staggering $5.2 Tn out of which $337 Bn is from South Asia. But in India, 70% (44 Mn out of 63 Mn) SMBs, do not have a formal registration for their business making it even more difficult for the government and banks to include them in the formal circle.

The two chief reasons behind the low formalisation quotient of India’s vibrant SMB sector are the lack of understanding for the value proposition that tech brings and lack of digital literacy. Due to this reason, SaaS startups in India have for long been dependent on international geographies to garner high LTV (long term value) clients. But with the pandemic and other structural changes in the past two years — such as the GST and demonetisation — SMB owners have had to force themselves to end this reluctance and embrace SaaS and other tech solutions.

With a wide addressable market and even wider utility, the business opportunity in the horizontal SaaS market has a very high ceiling. The financial performance of horizontal SaaS companies is also more sound and sustainable than other startups in tech sectors such as ecommerce and fintech. With VCs also tightening their belts, the flow of capital will be largely towards sectors and startups that have the best long-term survival prospects and superior unit economics in the short term. In a post-Covid world, if horizontal SaaS startups are able to crack the SMB market, we estimate the sector to grow exponentially over the next five years, even having the potential to grow into a $8.7 Bn market opportunity by 2025.