Edtech Startups On Cracking The Revenue Model Formula In India

India has more than 1.5 Mn schools with over 260 Mn students enrolled and about 751 universities and over 35K colleges. Every year millions of students take competitive exams at various levels, with millions of rupees spent in the background on schooling, coaching, training and more. Yet, no player in the edtech sector can claim to be profitable so far.

Except for BYJU’S, which earned INR 1306 Cr in FY19-20 at a loss of INR 8.80 Cr, most edtech startups are currently grappling with massive losses and are burning cash at a fast pace. Like highlighted earlier, the primary reason why edtech startups fail in India is the lack of funding to take on target this large market. On the contrary, investors are more interested in funding revenue-generating stable businesses.

For instance, According to DataLabs By Inc42’s The Future Of India’s $2 Bn Edtech Opportunity Report 2020, between January 2014 and September 2019, BYJU’S alone attracted 65% of the total funding in edtech startups. So what are the revenue models Indian edtech startups are experimenting with? And does the scaling-first-monetising-later strategy work better in the Indian context?

Inc42 spoke to industry leaders to get their view on the revenue models that are best suited for the Indian market. While many startups are still following the four key revenue models — freemium, pay-as-you-go, enterprise sales and subscription, other models are emerging such as success-based pricing and income-sharing agreements, which are seeing adoption in K-12, test preparation and skilling startups.

Most Popular Revenue Models In Edtech

The test preparation and K-12 segments have high traction but a weak turnaround to paid consumers. “Most players are either providing a lot of free material, which they don’t know how to monetise, while those providing high-value courses, have to spend a lot to get the desired user base,“ said Anuj Tiwari, CEO of Aakash Digital.

On the flipside, despite low traction, the segments of online certification and skill development have maximum paid users. This is because these segments are led by working IT professionals keen to enhance their key skills without committing to specific learning hours. 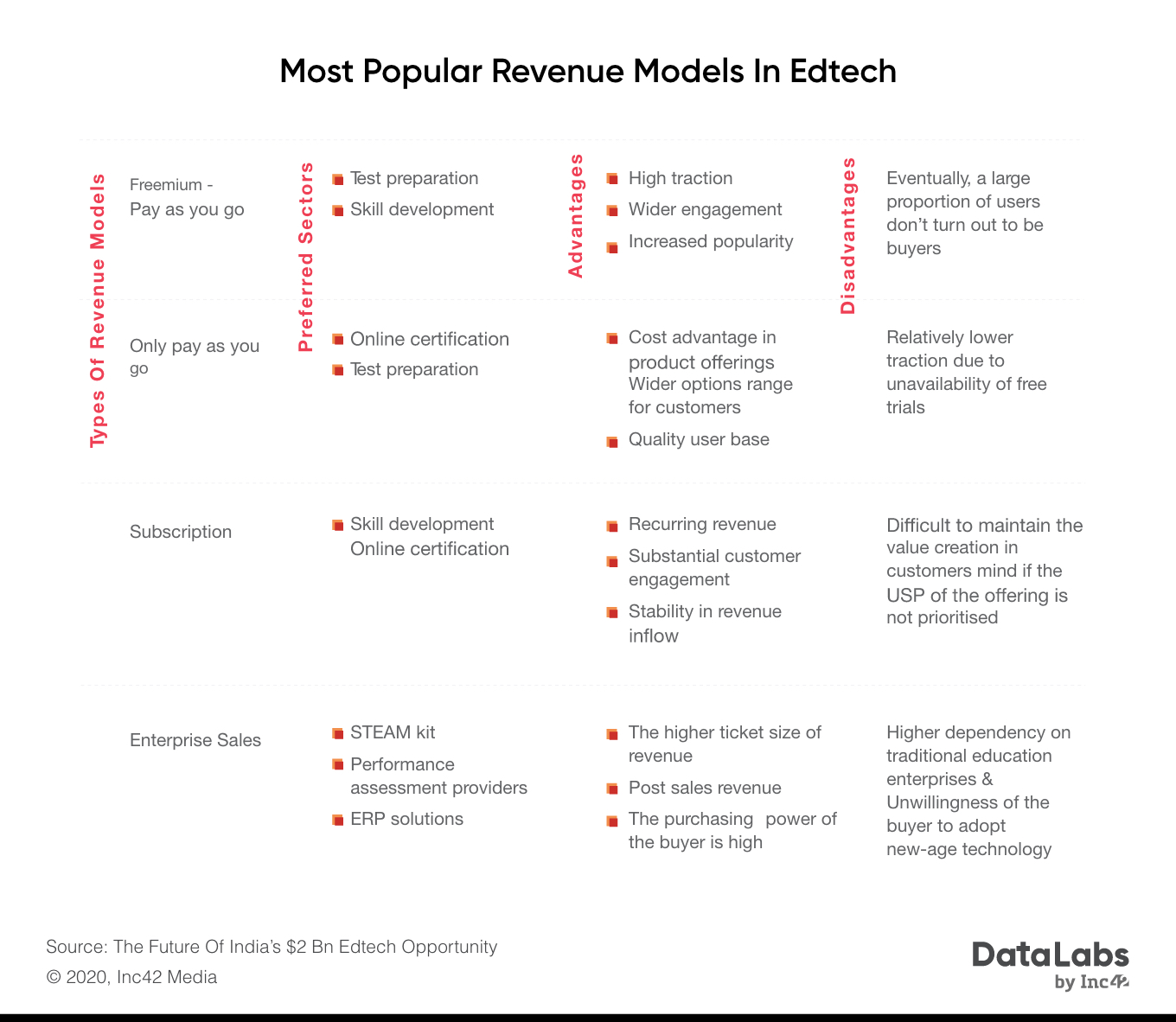 Manjeet Singh, the cofounder and CEO at Buddy4Study believes that success-based revenue should be the most successful model in edtech/reskilling.

WOW Skin Science Slips Into Red, Reports Loss Of Over INR 8 Cr In...

Insurtech Startup Nova Benefits Lays Off 70 Employees As Part Of ...

“The revenue of the startup should be linked to the success of learners. This is the only way to disrupt current institutions. For e.g. today the most successful educational institutions in India are the ones that are ensuring 100% placement of their students which is a proxy of success based revenue.”

Further, Ayush Jaiswal, cofounder of Pesto Tech, supports income sharing agreements as a revenue model for the skilling industry. According to him, this revenue model is beneficial for students as well as mentors because there is no loss deal in it.

“It is a contract between a student and an educational entity, such as a university or software engineering Bootcamp. In this model, the educational program provides a service in exchange for a defined amount of that student’s income upon completion of the program,” he added.

This is a million-dollar question for any startup founder when they start their journey. So what brainstorming goes into the camps of edtech startups?

For Pesto’s Jaiswal, scaling first and then monetising seems more suitable, but others such as Buddy4Study’s Singh and Sahil Vaidya, cofounder of The Minimalist, believe that having a monetisation model on day one is key for success in edtech.

Tiwari, on the other hand, believes that one needs to monetise their core and also spend money on scaling up at the same time. “For instance, we have 1-2-3 year courses, people take them although it takes lots of money to acquire them, then there are a lot of people who come for short-format courses which we give at a low value, and that’s the core we are monetising,” he added.

Udacity CEO Gabriel Dalporto told us that a balance between scale and monetisation is ideal — of course, that’s the best-case scenario. “Sustenance would depend on striking a balance between the two on the basis of your product. If you ask me what comes first then some products would be based on scale, hence they would want to scale first. This is true for most MOOC platforms. Others might want to monetise first because their product isn’t dependent on scale,” he said.

Khurma too agreed. “If you are doing a low ticket market and product, it’s important to scale first before thinking of monetisation (as it’s a high scale x low ticket game), whereas for a high ticket market/product (eg professional courses), the monetisation model should be in place right from the early stages”.

He also added that many edtech startups don’t pay enough attention to the acquisition or distribution model and instead spend a lot more time developing the product in isolation. “A balance is needed — a distribution model that scales at sustainable LTV/CAC, and at the same time, a product that has a demonstrable impact on learning outcomes (to generate positive word of mouth).”

Well, it seems every player in edtech is playing their own game. In the last few years, the number of edtech startups in India has gone up quite significantly, yet only a few have been successful. According to Datalabs by Inc42, between January 2014 and September 2019, over 4,450 edtech startups have been launched in India. Of these, roughly 25% of startups have shut shop.

So is pricing a concern here? Yes, for some and no for others. For The Minimalist’s Vaidya Indian users are driven by discounts and even in edtech, the scenario might be slightly different as it is a critical decision, given the extreme competition that sector is witnessing.

Aakash Digital’s Tiwari believes the same. According to him, education as a sector is primarily different from other sectors because the consumer here is willing to pay more for the value. “They do not tend to go towards the cheapest product in education because it’s considered as a life-changing investment.”

Still, many edtech startups cannot sustain with the deep-pocketed competition and sometimes tend to adopt the wrong revenue model. What will the future look like in this regard? Jaiswal said that edtech has to grow beyond marketing and platforms need to prove themselves through outcomes.

“Edtech startups in India rely mostly on referrals and word of mouth market. Thus, when the marketing fails, it breaks the backbone of an edtech startup. There is no doubt that many edtech companies will flunk out. The ones that don’t pay attention to pedagogy will end up creating dead-end apps. The ones that forgo sustainable business models will be eaten by others as the market faces a consolidation.”