Reports are circulating of Finland doing away with its entire student curriculum and people across the world are applauding the move towards an education-less model. But is this the absolute right move? Should structure, discipline, social interaction, and knowledge gleaned from teachers and authority figures be entirely discounted.

India does not think so.

This is where Indian edtech startups are making their mark. The education sector in India is poised to witness major growth in the years to come, as India will have the world’s largest tertiary-age population and second largest graduate talent pipeline globally by the end of 2020.

The startups that raised more than $10 Mn in edtech sector are Simplilearn, Toppr, BYJU’s and EduPristine.

With an average year-on-year growth of 49% in deals and 149% in total funding, edtech is one of the sectors that made big in 2016. Bearing this in mind we, at Inc42, decided to deep dive into the sector to get a more comprehensive understanding of edtech in India. 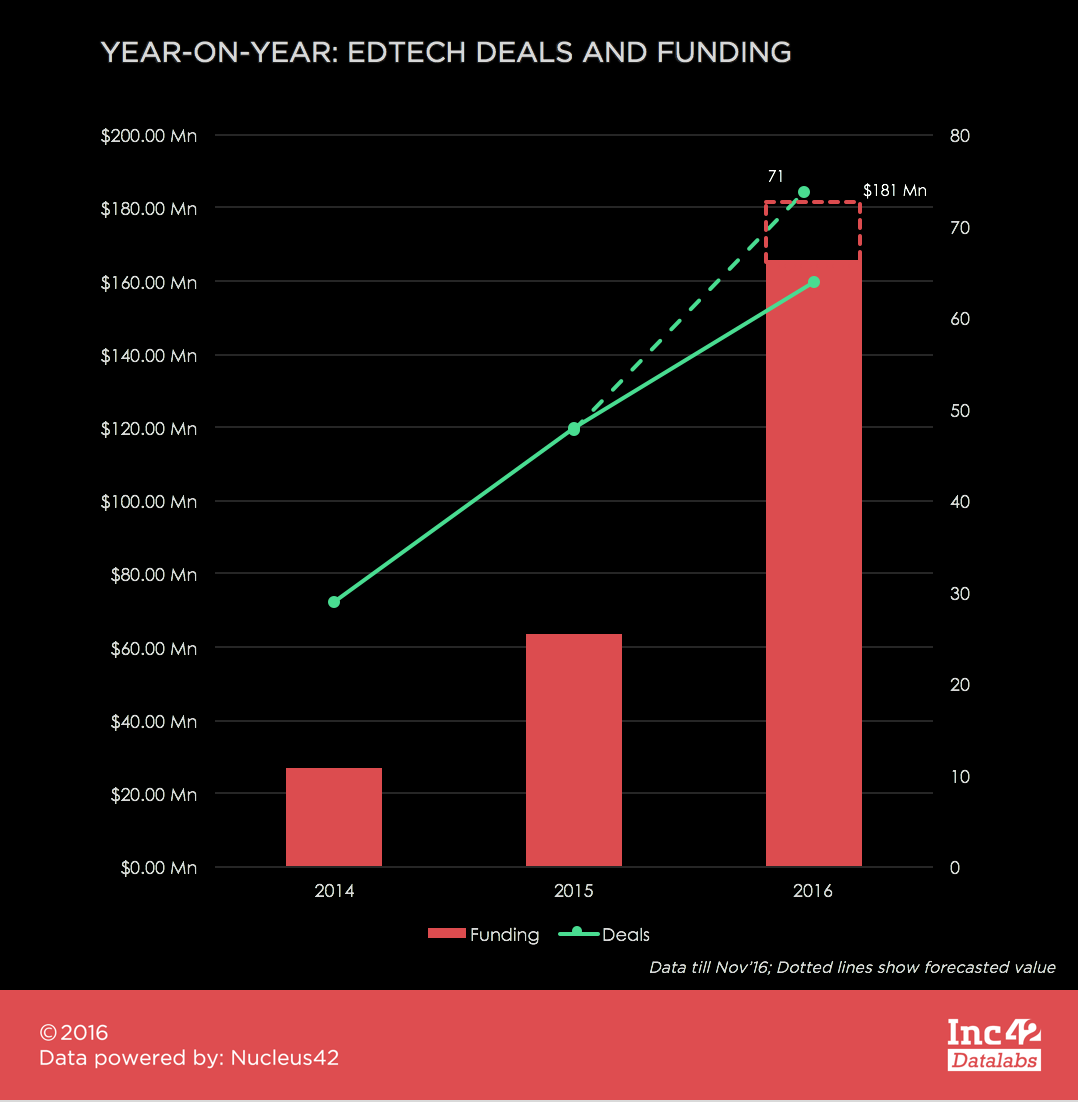 A window into the quarterly plot shows a steady growth in edtech funding since Q1 2015 to Q3 2016. The Q4 2016 plot shows a drop in the ecosystem. However, going by the trend the market is expected to show recovery in 2017. Breaking Down The Numbers

Although in terms of deals, early stage (Seed funding and Pre-Series A) constitute 79% of the total deals, only 14% of total investment was made to it.

Major investment was observed in Series A, about 43% of the total funding, while, in terms of deals, Series A consisted of only 13%. 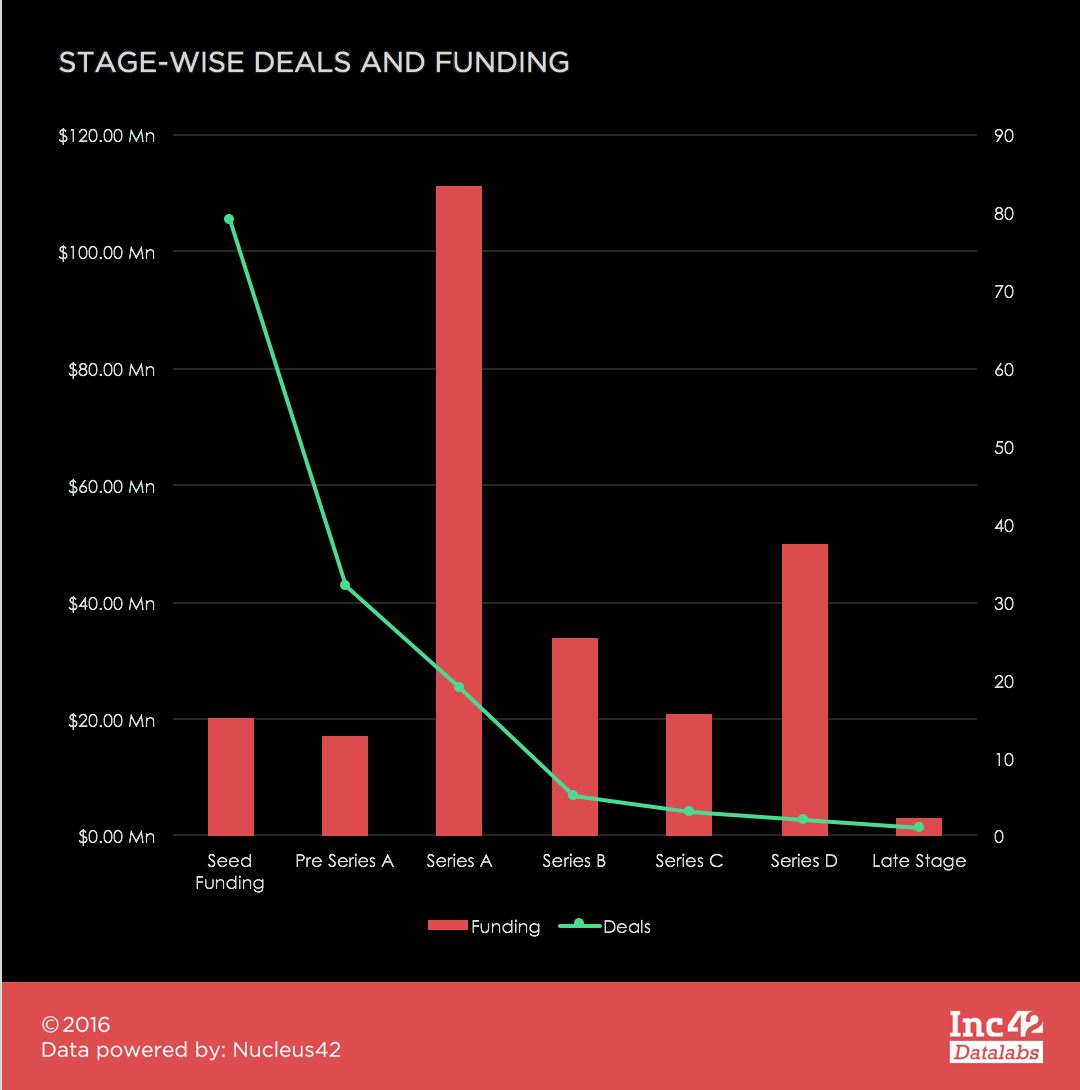 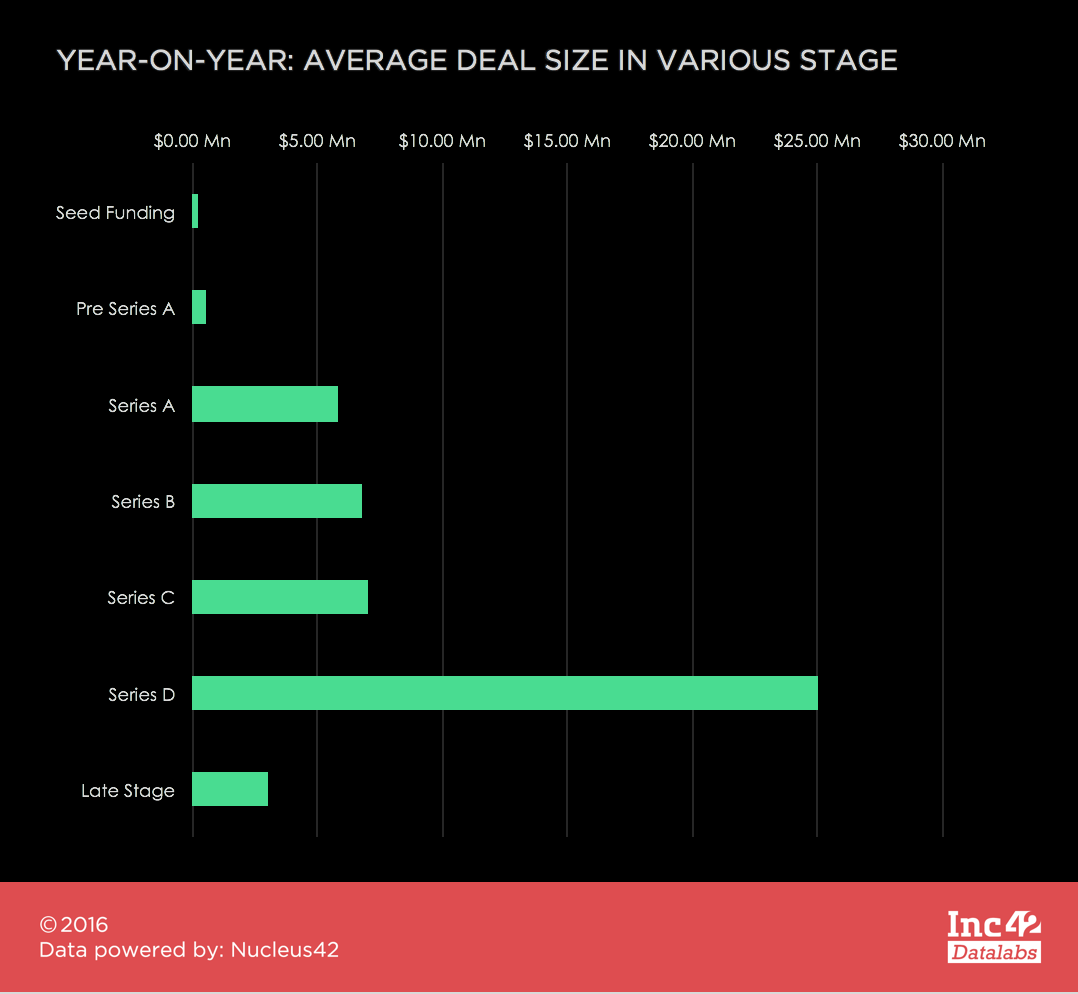 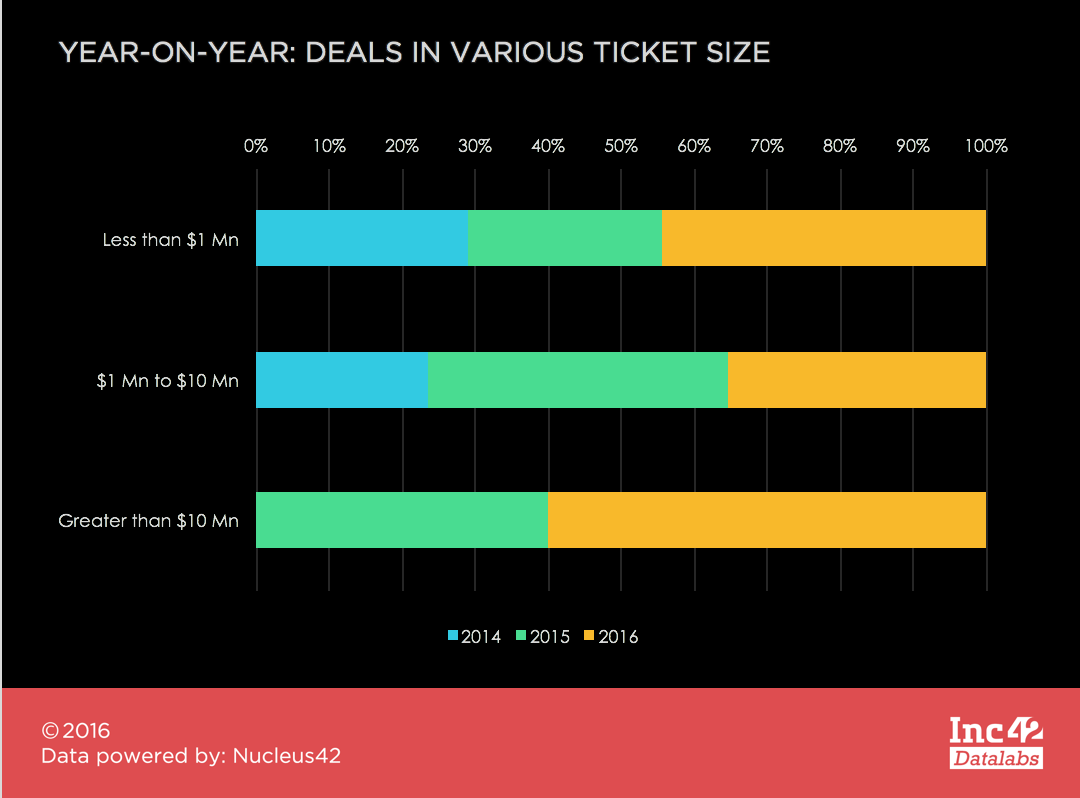 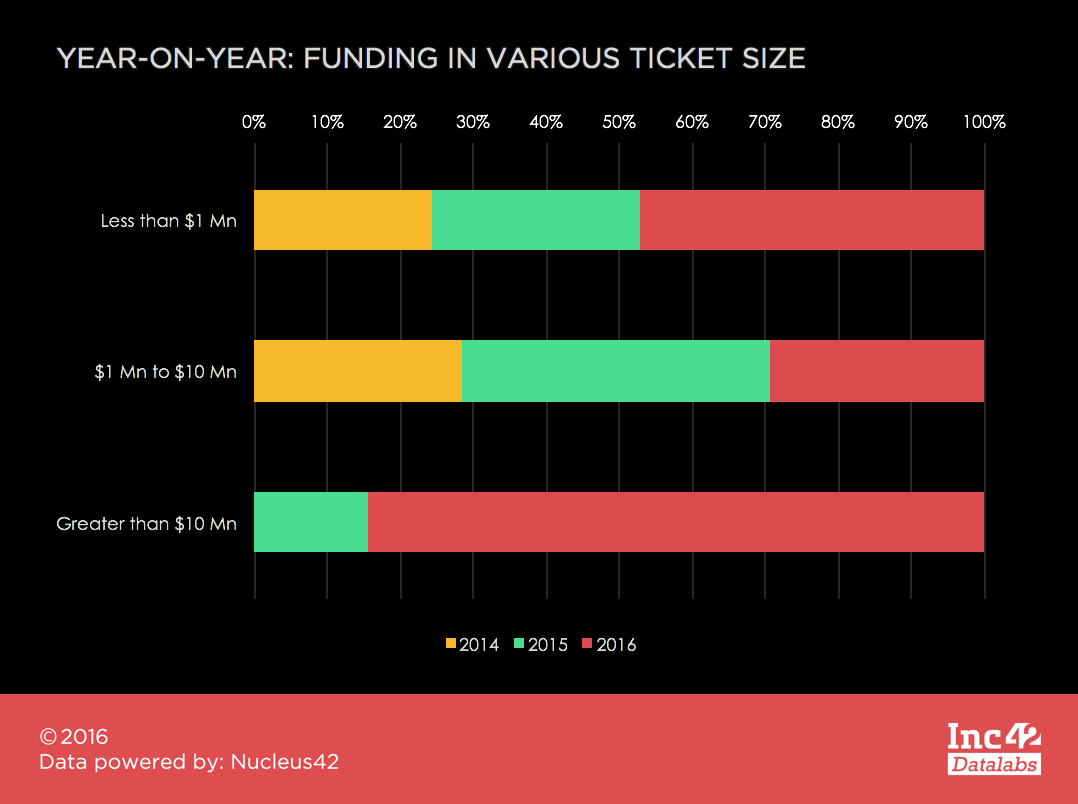 Delhi and Bengaluru came neck to neck in terms of number of deals made. However, Bengaluru leaves Delhi way behind in terms of investment owing to BYJU’s $125 Mn funding of Byju’. Mumbai, Hyderabad and Jaipur were the other prominent cities where edtech startups flourished. 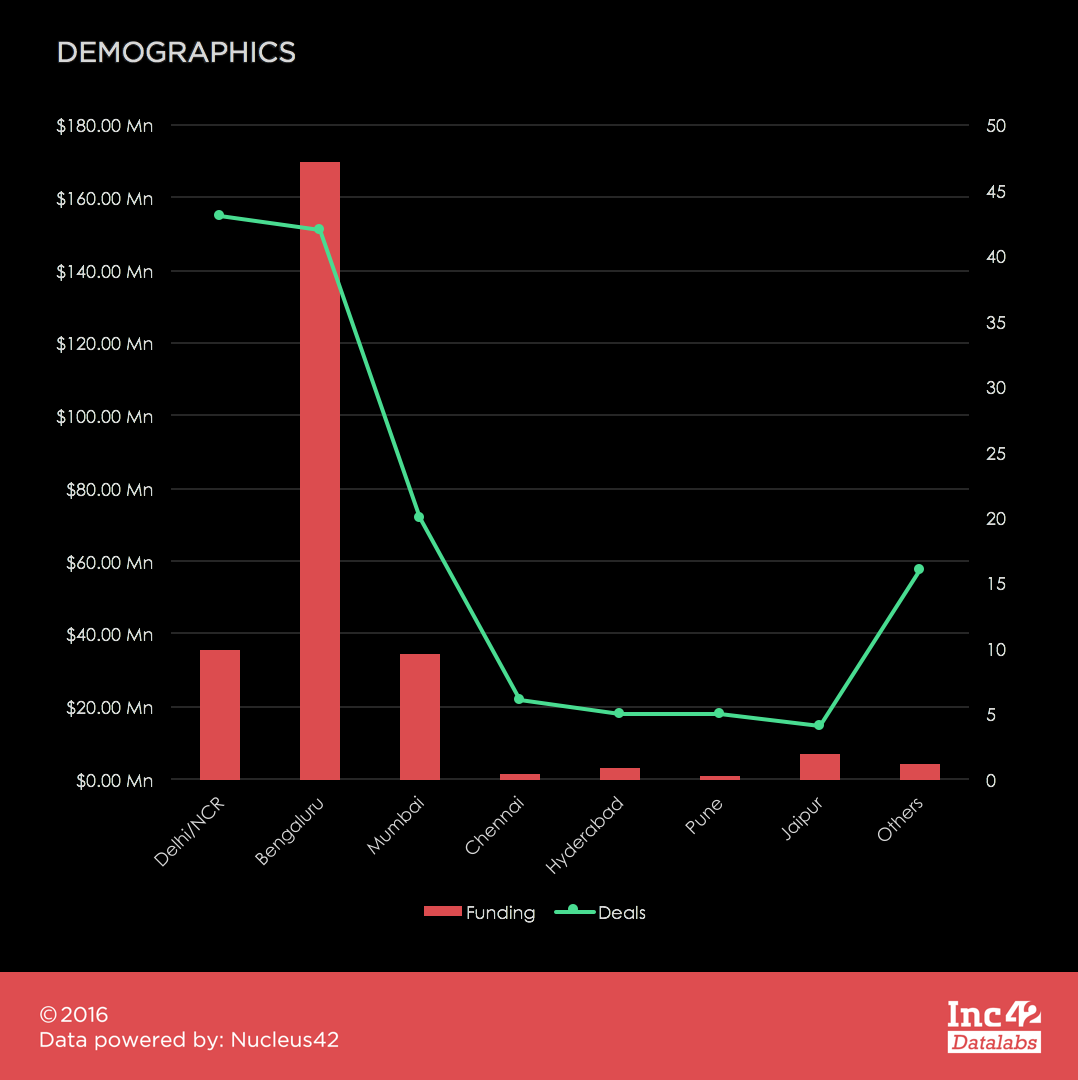 E-learning is the hottest sector in edtech market of India. Around 34% of the total funding was made to e-learning startups. Discovery and interactive gaming were the other two prominent sectors. Investors in this sector have exponentially increased since 2015. About 176 unique investors took part in the funding of edtech startups. Blume Ventures, Michael & Susan Dell Foundation, 500 Startups, S. Chand & Company, and Aarin Capital were the top investors of the sector with the maximum number of deals. Edtech will always remain one of the most important markets, given the importance of education in a developing nation such as India. Although there has been a dip in the Q4 of 2016, the general trend suggests a speedy recovery in 2017. Edtech will drastically benefit from smartphone penetration, increased data connectivity, gamification and the introduction of AR, VR in the sector to induce students to take to education in a non-classroom atmosphere. The potential is immense, however, what actually happens remains to be seen.