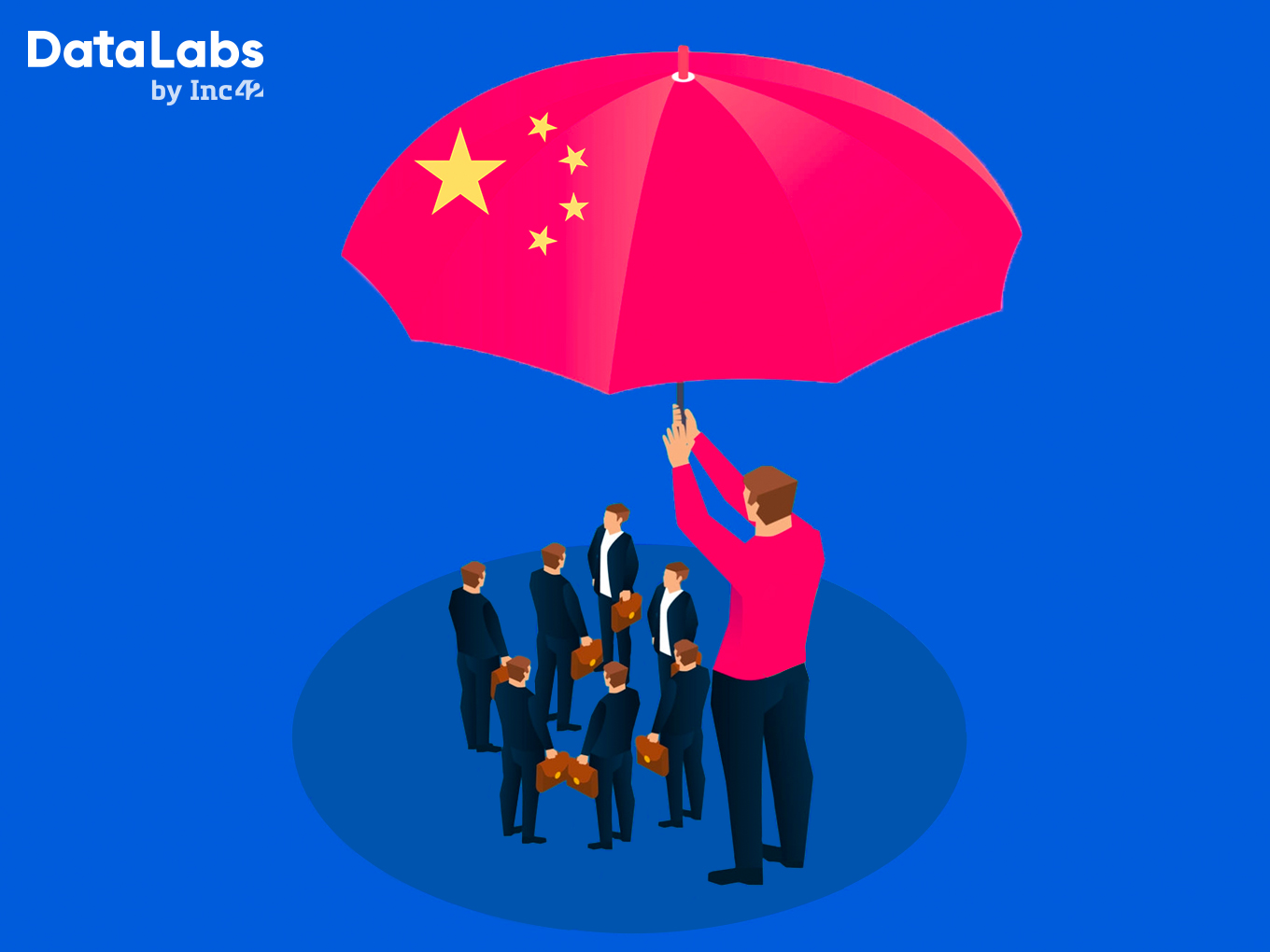 With over-reliance on imports from China, India has run up a $73 Bn trade deficit bill

India and China are two of the oldest surviving civilisations in the world. The relationship between the countries has witnessed lots of ups and down from the signing of the Panchsheel agreement in 1954 which propagated the famous Hindi-Chini Bhai-Bhai slogan to the brutal Sino-Indian war in 1962, and of course the border skirmishes in the 21st century.

Despite the love-hate relationship, when globalisation kicked in, Indian trade became heavily dependent on Chinese exports. China is the third-largest trade partner for India when it comes to exports with a total trade value over $16.3 Bn in 2018. The massive MSME sector in India also relies heavily on Chinese imports due to low manufacturing cost in mainland China and the high demand for products, especially consumer electronics, in the domestic market.

The Covid-19 pandemic and disruption of China’s production factories and the supply chain sent alarm bells ringing across industries in India ranging from pharmaceuticals to automobiles. Even the new-age sectors such as EVs and renewable energy are on the brink of facing a shortage of raw materials in the short term.

In addition to the trade relations, China-based companies also hold a significant share in some of the prominent Indian startups such as Paytm, Swiggy, Practo, Zomato and others. Overall, in the contemporary world, a healthy trade relationship between the two nations is in the best interest of both countries. 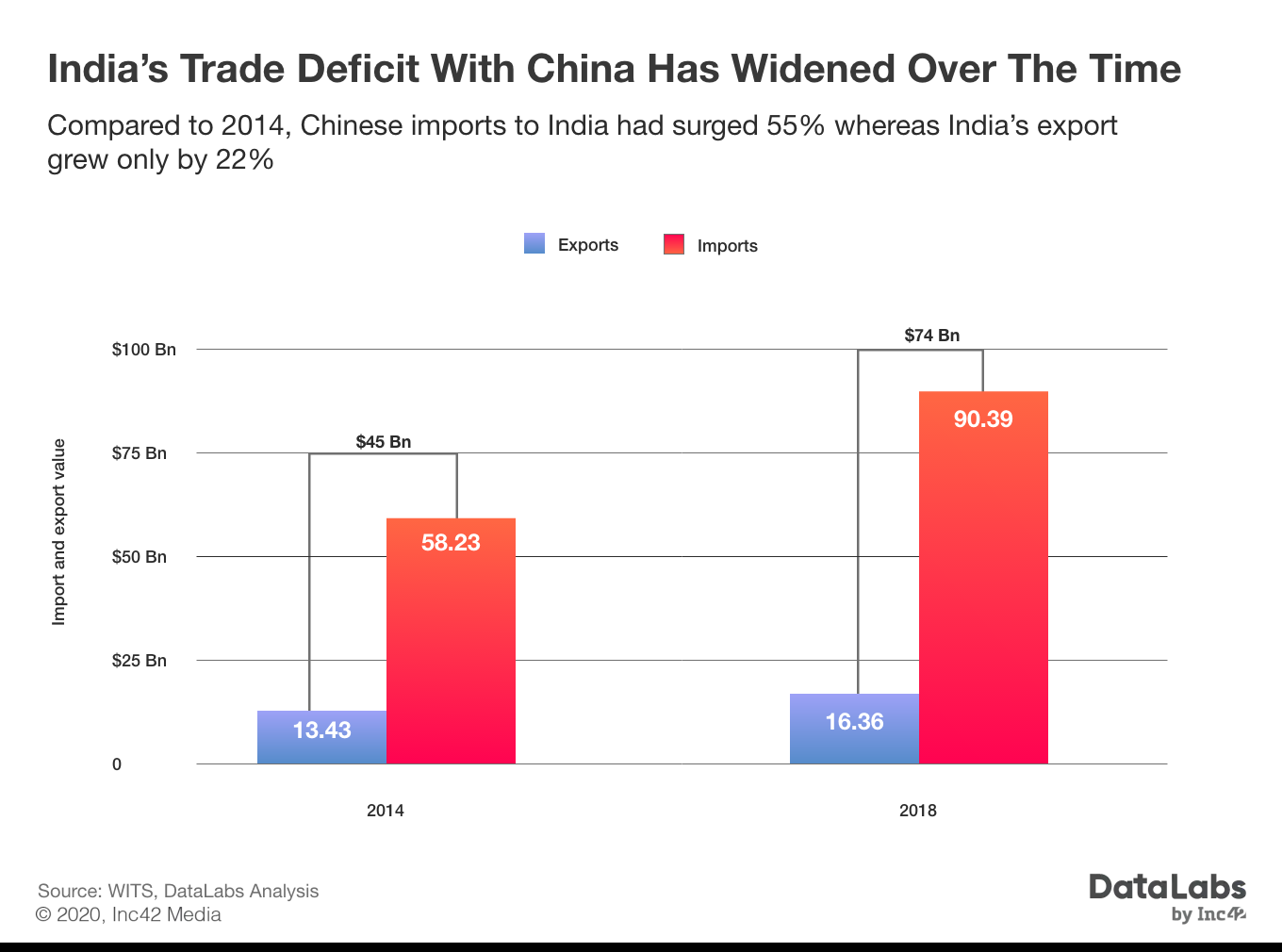 The balance of trade has always been an issue between the trade relationship of India and China. In 2018, the total trade deficit between India and China was $74 Bn an increase of 65% over the span of four years.

The fact that the production efficiency of India is nowhere compared to China makes it relatively harder for Indian companies to showcase the same value proposition which China-based products have in Indian markets. In addition to this, China is known for subsidising domestic products to curb the demand for foreign imports, which as a result provides an unfair advantage to products manufactured in the country over foreign imports.

Apart from the problem of the trade deficit, dumping of inferior quality products by China into Indian markets is another major concern which has been highlighted by the Indian government on numerous occasions. On a global level too, China has been known to ship products that don’t pass muster, like in the case of facemasks or PPEs exported to Europe for the Covid-19 pandemic.

Dumping of exports is a practice where the exporting country floods the importing nation’s market with goods priced lower than domestic items. This puts Indian manufacturers at risk as offering products at a lower price than cost will put them out of business.

The debate over whether dumping is legal or not has always been a hot topic at the World Trade Organisation. The WTO does not consider dumping illegal if the products provide higher value creation to the customers in the importing nation compared to their domestic products but if a country is able to prove that dumping is having a negative impact on their domestic manufacturing market then its deemed illegal.

Manufacturing in India contributes approximately 25% of the total Indian GDP but it is also one of the biggest providers of blue-collar jobs in the nation. With the Indian government trying to ramp up our domestic manufacturing market with initiatives such as Make In India, dumping of goods from China is a major roadblock in the way. One example to measure the severity of dumping from China is that in January 2019, India import anti-dumping duty charges on 99 Chinese imported product categories ranging from electronics to chemicals and petrochemicals. 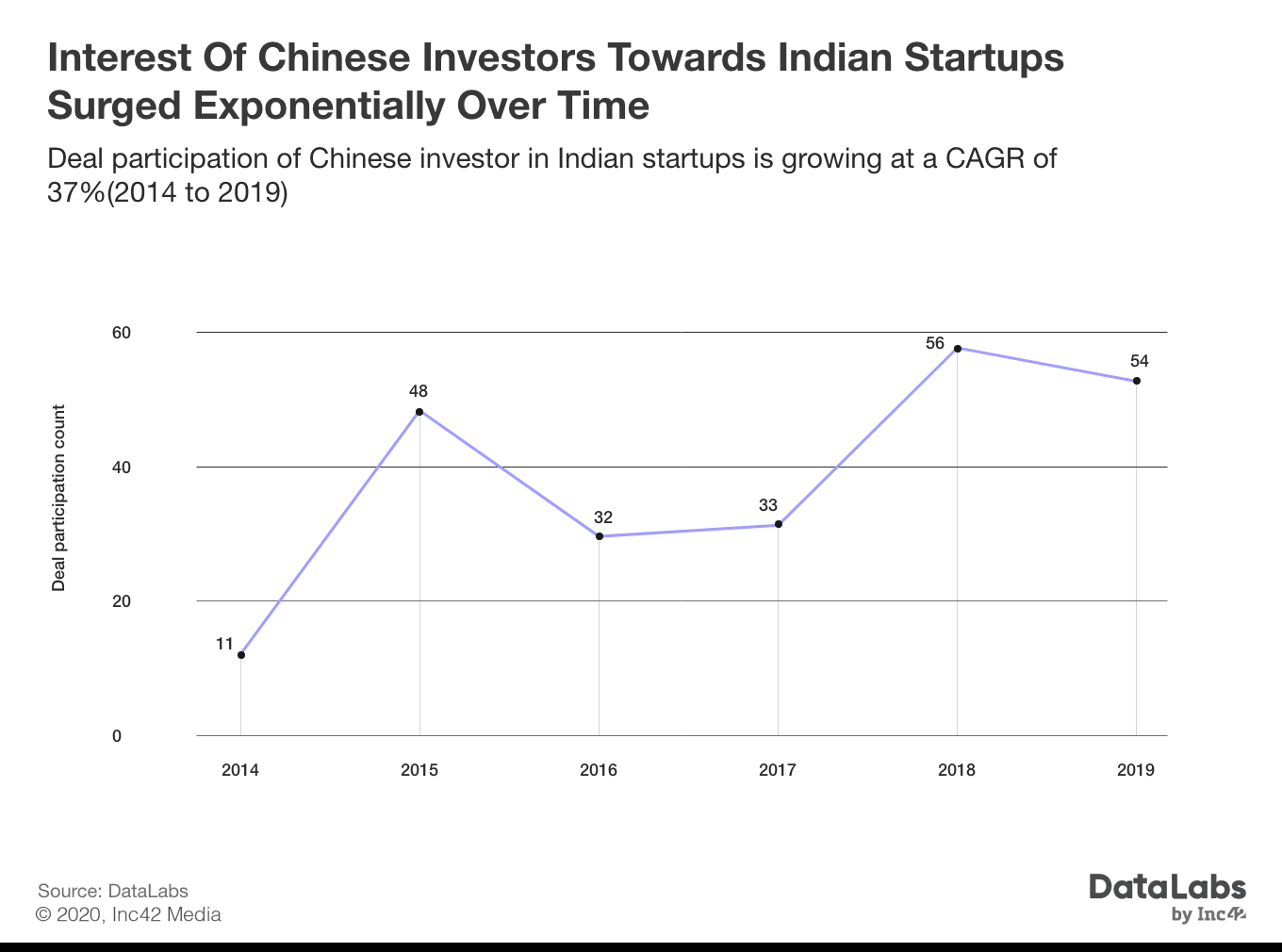 Between 2014 to 2019 the total capital inflow by China-based investors in Indian startups was over $27 Bn. Two of the prominent Chinese investors in India are — Alibaba and Tencent, which have stakes in Indian Unicorns such as Paytm, Zomato, Bigbasket, Hike, Flipkart, MX Player, BYJU’s and others.

The growth stage (Series A and B) is the most preferred funding round for Chinese investors in Indian startups. Out of the 234 funding deals which have witnessed participation of at least one Chinese investors, 49% or 115 were in the growth stage, followed by 91 (39%) at the late stage. This indicates the fact that Chinese investors in India prefer to invest in businesses which already have a critical mass and can be scaled further. This is very similar to the investment strategy of Japanese origin investors which was highlighted in our report— Japanese Investors In India Report 2019.

Ecommerce and fintech are the favourites of Chinese investors when it comes to sectors, with 41% (or 96 out of 234) deals being in startups in these two sectors. This is another indication of the risk-averse nature of Chinese investors as these two sectors have the highest adoption in India even beyond the metro cities, and as considered quintessential digital services.

Overall, even in the new-age economic sectors, the China-India relationship is similar to that in the traditional sectors. This is most evident in consumer electronics and social media, where India has welcomed Chinese companies such as smartphone manufacturers Xiaomi and BBK (OnePlus, Oppo, Vivo, Realme) and social media giant ByteDance which brought TikTok, Help and Resso to India.

Although, the presence of Indian companies in China is very minimal. Going forward, facilitating a win-win situation for both countries will be a more sustainable option for the long-term relationship, especially as India also makes inroad in electronics manufacturing and bulks up domestic capacity for other industries.

Note: The worth of total Chinese investment in Indian startups is estimated based on data from Tracxn, However, the deal participation count is inclusive of their co-investments as per our own database.