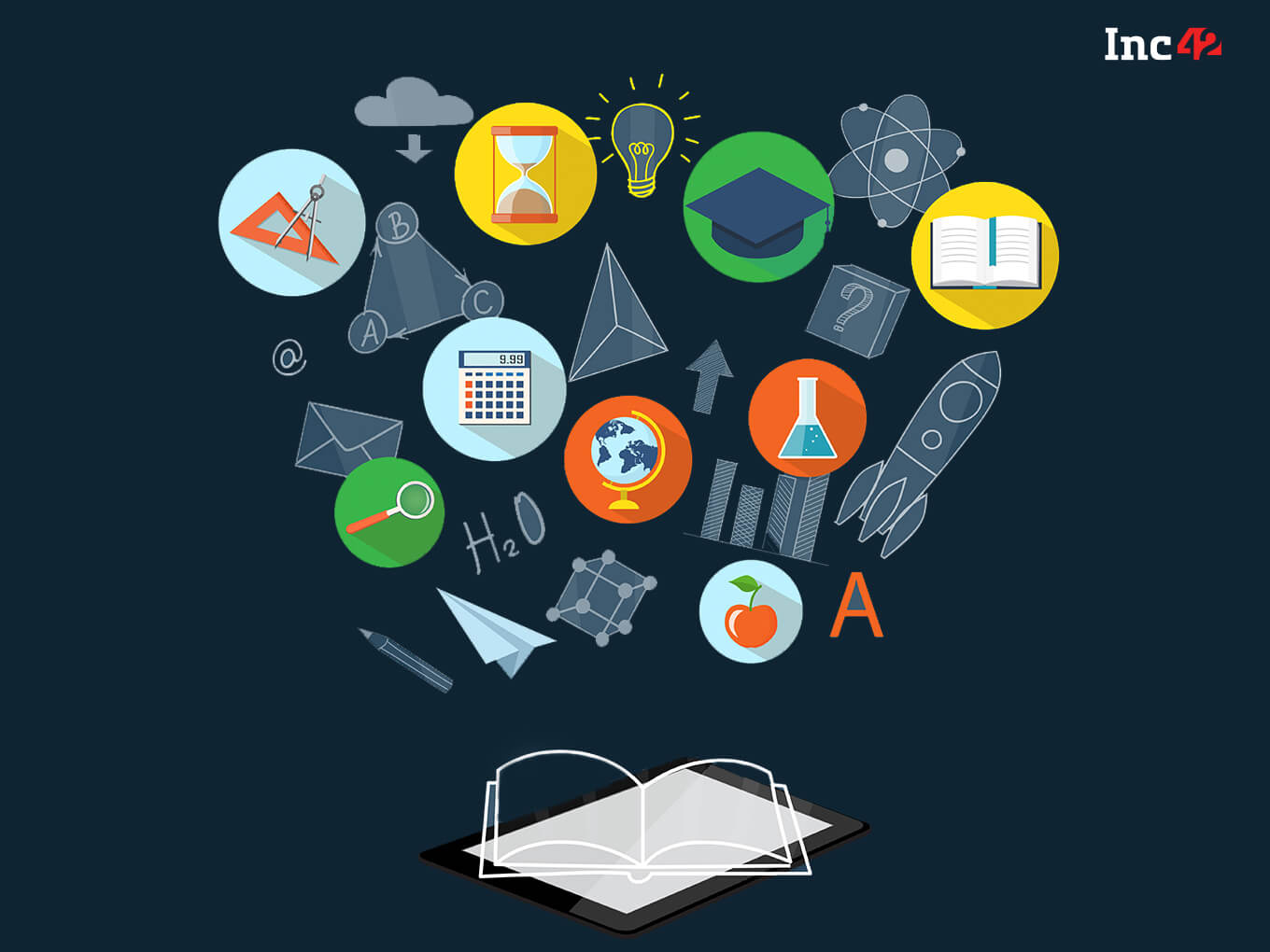 The total venture capital investments till September 2020 of $1.4 Bn outweighs the total investment seen in the past three years

Despite growing investor interest in the category, four out of five funded edtech startup in India still don’t have positive unit economics 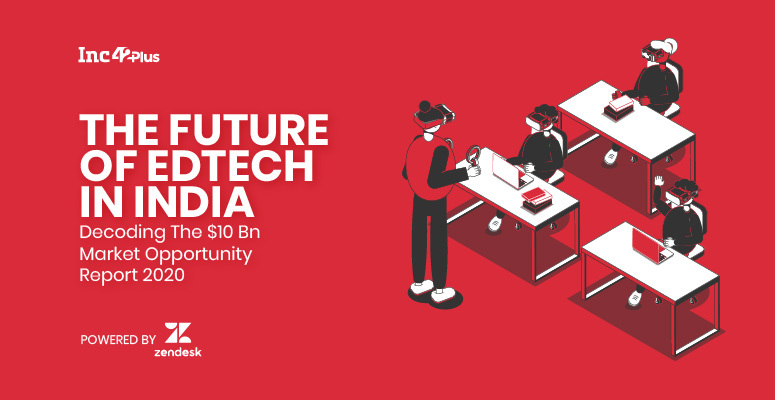 Despite the deep cuts and the economic toll of the pandemic, edtech startups have managed to attract significant investor confidence due to rising adoption from consumers and institutions, coupled with increasing demand for upskilling and certification courses.

Between January and September 2020, edtech startups in India combined attracted venture capital investments worth $1.4 Bn across 76 funding deals. Edtech was the top sector in terms of total funding between the said period and third in terms of the total funding deals. Among the other edtech startups, late-stage startups such as BYJU’S and Unacademy announced major rounds. While BYJU’S remains the most valuable edtech startup in the world, Unacademy secured its entry into India’s unicorn club after the $150 Mn funding round led by SoftBank.

Besides the convenience factor as well as the forced adoption due to the pandemic, edtech startups have enabled more individuals to explore various new skills and have allowed experienced workers to take on newer challenges in the tech industry through certification courses, eliminating hurdles existed just a decade ago.

Venture Capital Inflow Over The Years 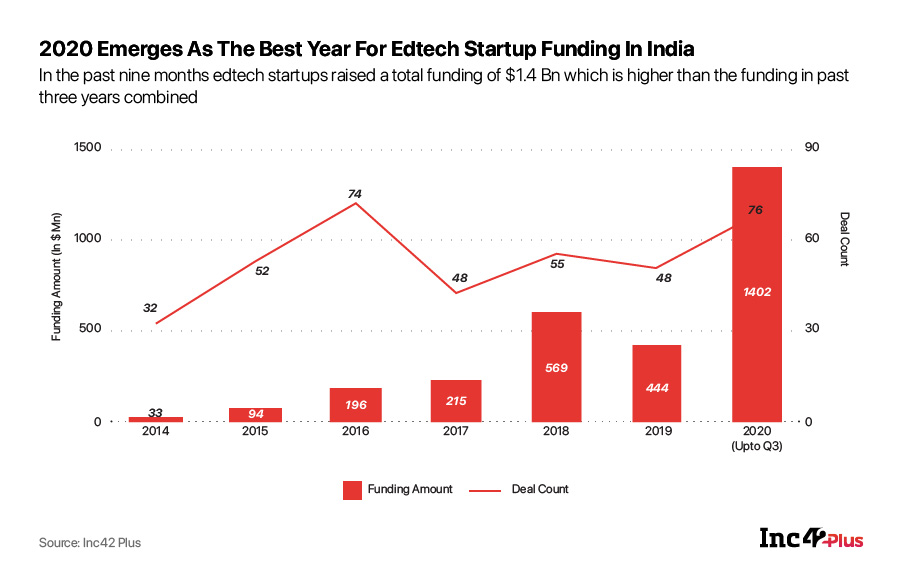 The meteoric rise of funding in edtech startups in 2020 can be attributed to the investment rounds raised by late-stage edtech startups— BYJU’S, Unacademy and Vedantu. These three startups combined made 79% (or $1.1 Bn out of $1.4 Bn) of the total capital inflow this year. As per the national economic survey 2017-18, the income elasticity on education is estimated at 0.93 compared to 1.95 in healthcare. This indicates that at any income level, an Indian consumer will prefer investing more on education than healthcare. 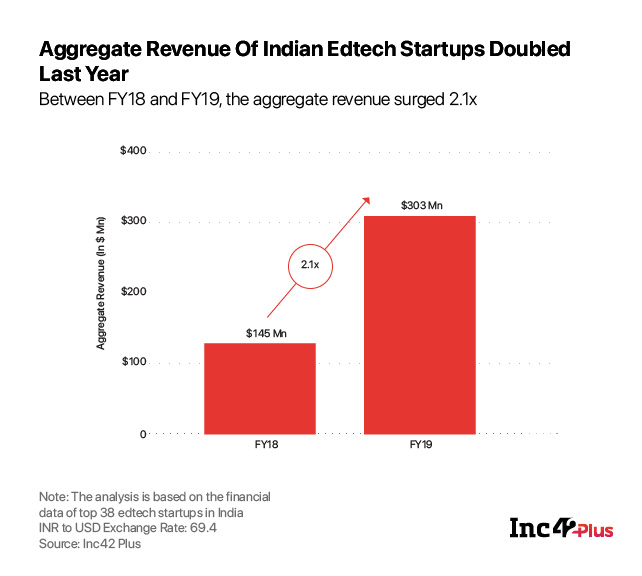 With education being the centre of attention for the majority of Indian households, edtech startups have managed to rake in a decent amount of revenue. In FY19, the aggregate revenue of India’s top 38 edtech startups was $303 Mn, 2.1x higher than $145 Mn the previous financial year. Also, the median revenue surge between FY18 to FY19 was 78% in contrast to the median expenditure growth of 43%.

Although the overall macro outlook of the financial performance of edtech startups looks promising in terms of revenue vs expenditure, when it comes down to the unit economics we are presented with a very different picture. Will the rising adoption rate change the revenue game for edtech startups in 2020-21? 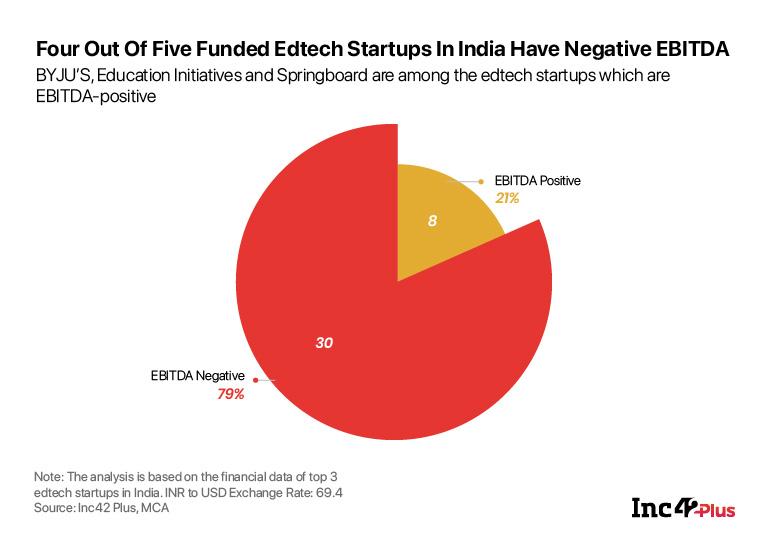 More in-depth financial analysis along with the list of all EBITDA positive edtech startups in India have been decoded in our latest release— The Future Of Edtech In India: Decoding The $10 Bn Market Opportunity, Report 2020.