Despite only a marginal growth in the transacting customer base and total order volumes, the company reported a 35% spike in average order volume 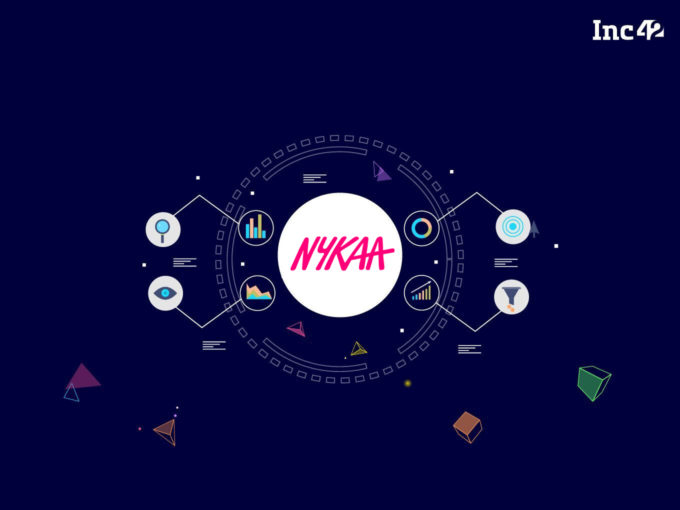 Online beauty aggregator Nykaa has reported a profit of INR 61.9 Cr in FY21, which bodes well for the beauty and fashion omnichannel retailer ahead of an initial public offering later this year.

The company stated that revenue growth was supported by an increase in demand for our products in 2021, as a result of increasing online shopping by consumers in the beauty and personal care vertical, as well as the launch of multiple product categories and brands as part of its fashion offering.

And now the company is looking to raise INR 525 Cr via fresh equity issuance according to the company’s draft red herring proposal (DRHP) filed with the Securities and Exchanges Board Of India (SEBI). According to media reports, Nykaa intends to raise a total of INR 4,000 Cr.

Founded by Falguni Nayar, a former investment banker, Nykaa’s content led business model has pioneered the market for D2C brands in the beauty and personal care (BPC) space since 2012 when it was launched. Here’s what we found reading into its financials for the past three years as disclosed in the DRHP.

Ahead of the IPO, the promoter and promoter group hold a total of 54.25%, which is quite high for a unicorn. Both promoters and investors will make a partial exit through an offer of sale of shares totalling up to 43.1 Mn. Those opting to sell via OFS include promoters Sanjay Nayar Family Trust (4.8 Mn shares), and investors such as TPG Growth IV, Lighthouse India Fund III, Lighthouse India III Employee Trust, JM Financial and Investment Consultancy, Sunil Kant Munjal and others.

A closer look at the financial performance for FY21, shows that Nykaa’s growth has been supported by higher average ticket size or order values from a chunk of its existing customers. Almost 90% of the platform’s income is earned from sale of products on the marketplace.

The platform had witnessed a 51% increase in transacting customers and a 35% growth in order volume in FY20, compared to FY19 although AOV remained flat during the time. This indicates that new customers may not have added significantly to the platform’s sales. What we need to watch is whether customers will continue this increased spending as the pandemic impact wanes, and as more and more D2C brands and marketplaces focus on the beauty and fashion categories.

The remaining 10% of Nykaa’s income is derived from marketing services to sellers on the marketplace. This component also grew around 38% during the past fiscal and 33% between FY19-FY20. 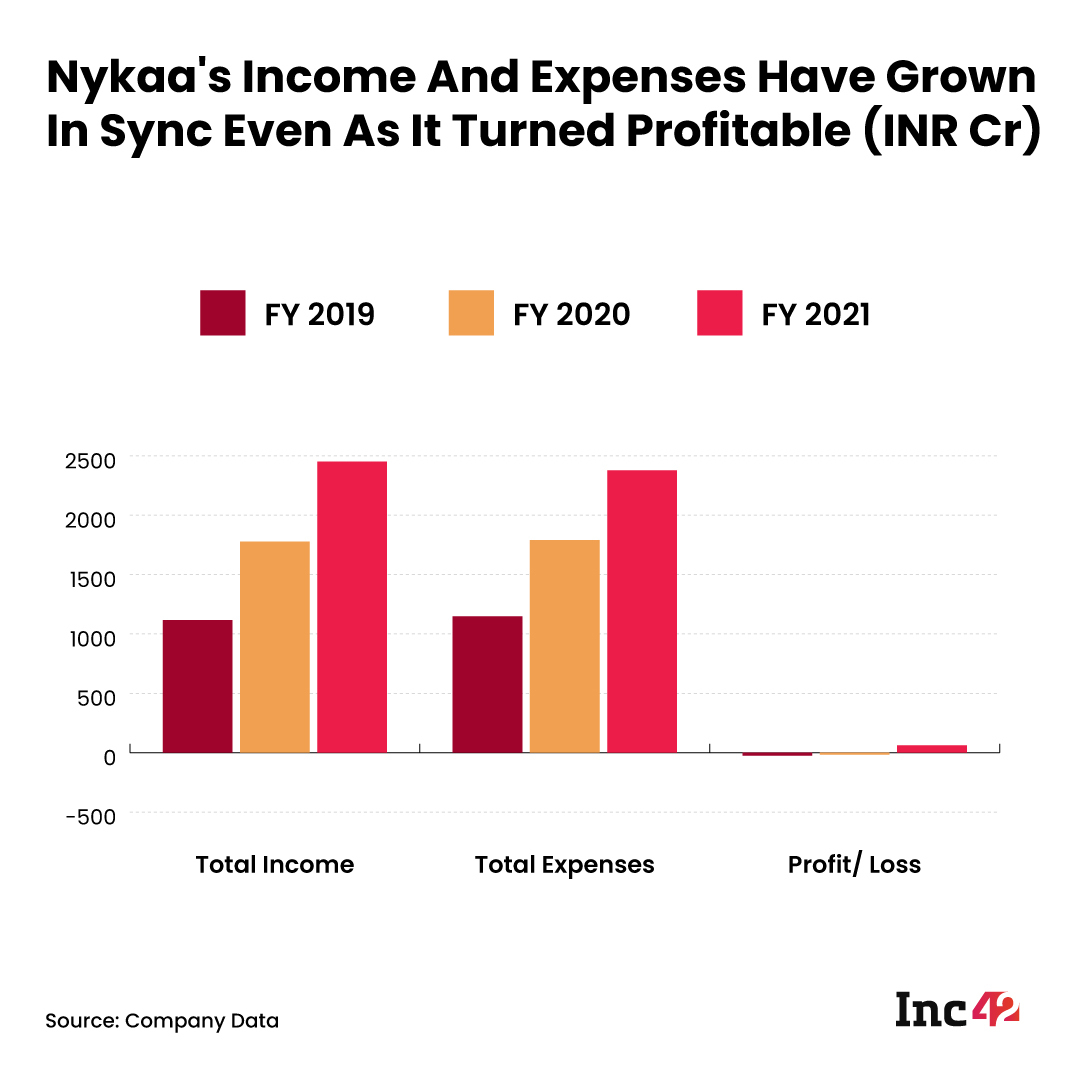 Another point to be noted is that while the AOV has improved as well as  Nykaa’s gross merchandise value (GMV) or total cost of products sold, it has not converted to a similar growth in gross margin. Higher gross margins means that the company is making more money on each product sold.

That said, a good gross profit margin for online retail is around 45.25%, according to NYU Stern School of Business.

Cost of goods sold increased by 46.70% to INR 1,487.8 Cr during FY21 from INR 1,014.2 Cr for FY20, primarily due to an increase in sale of products that Nykaa purchased from brands or their distributors and manufactured under its owned brands, it stated in its DRHP.

In FY21, Nykaa’s share of other expenses increased by 6.57% to INR 507.9 over FY20 due to higher freight and packaging costs. Meanwhile marketing expenses during the fiscal were down by 19% year on year.

The company witnessed 3 Lakh additional transacting customers during the fiscal year when marketing spends were down due to the pandemic. In contrast, in FY20 its marketing spend was 34% higher than FY19 and it added almost 2 Mn transacting users showing how deeply retail marketplaces depend on advertising for reach. 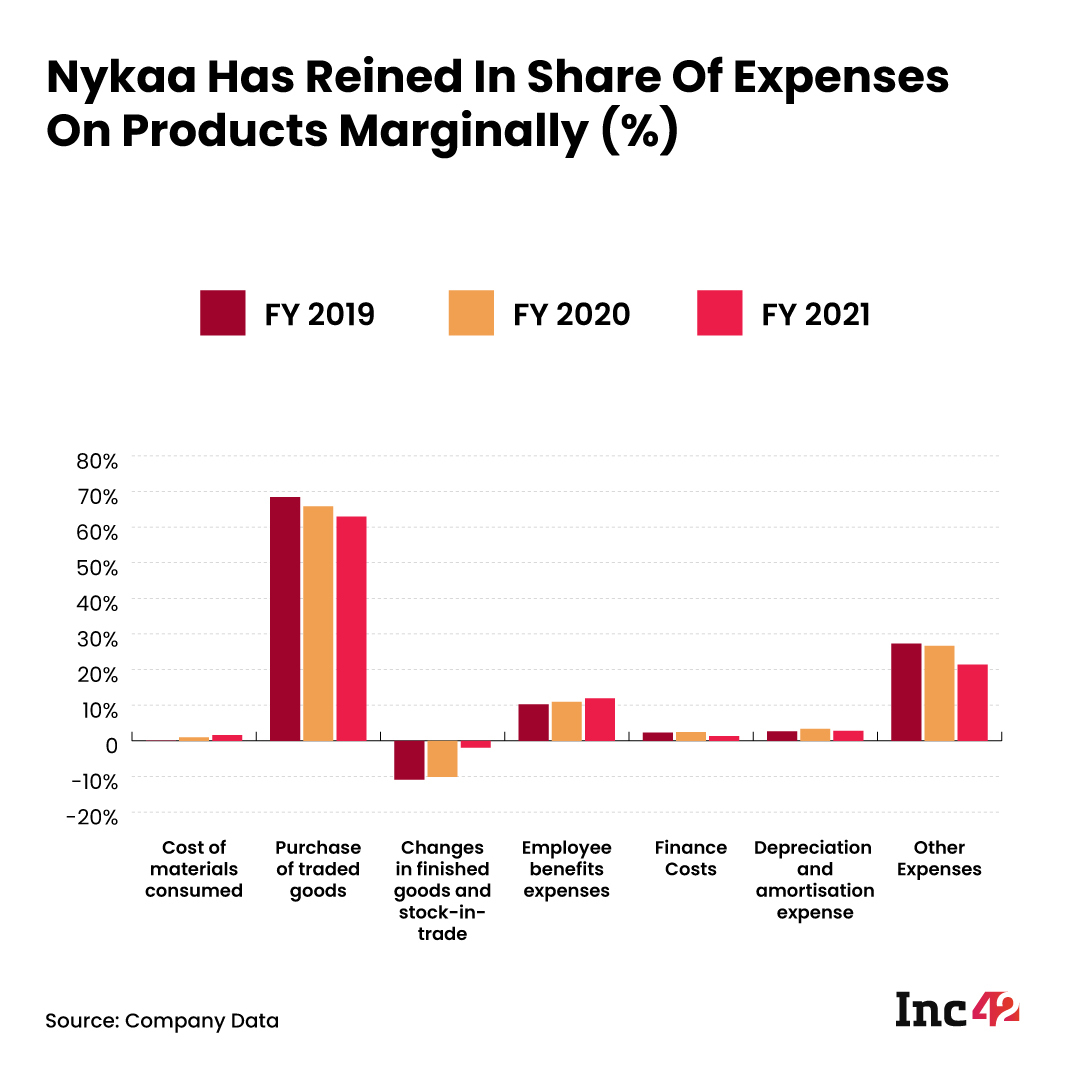 What is interesting is that Nykaa has reduced the share of expenses on finished goods that it was purchasing from 68% in FY19 to 62% in FY21. The company has not shared details about how its in-house brands and private labels have contributed to the business, but it is likely that this is the reason for lower purchases. This is also backed by the fact that spending on raw materials has doubled from INR 17.3 Cr to INR 38.2 Cr during the same time.

According to Inc42 Plus, India is estimated to have an ecommerce market valued over $200 Bn by 2026 while the larger retail market is expected to reach $1.7 Tn value.