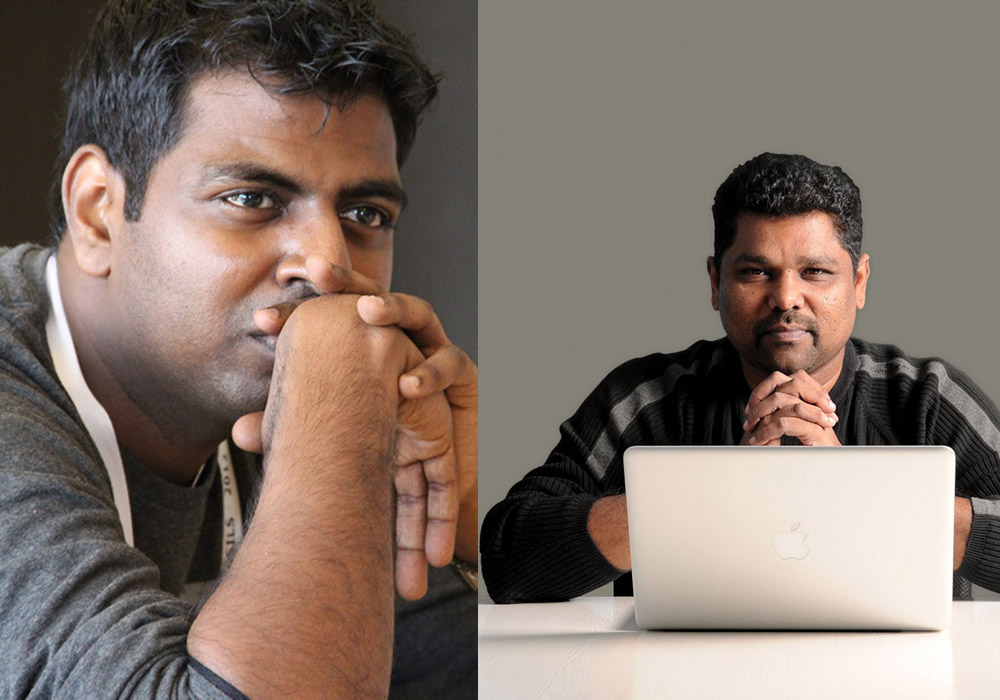 Do Indian startups tend to hire more people compared to their counterparts in the Valley? Vijay Anand, founder and CEO of Chennai-based accelerator The Startup Centre, thinks so and highlighted this in a LinkedIn post taking a dig at two big names in Indian SaaS – Zoho and Freshdesk.

Vijay started off the post with a question – “How come companies such as Skype, Instagram or Whatsapp were built by a small set of engineers? Skype had a team of 27 when they got acquired. Instagram had 13. Whatsapp had 32 Engineers and 55 employees when they were acquired by Facebook and had a whopping 900 mn people using the service. Gmail for e.g., is still managed by a team of 100 (engineers).”

He then pointed out that, in contrast, when one looks at the Indian startup system, it’s the opposite. “Practo has 2,000 employees (150 of which were laid off in the recent appraisal process while Freshdesk is at about 900 employees and growing fast,” he wrote. 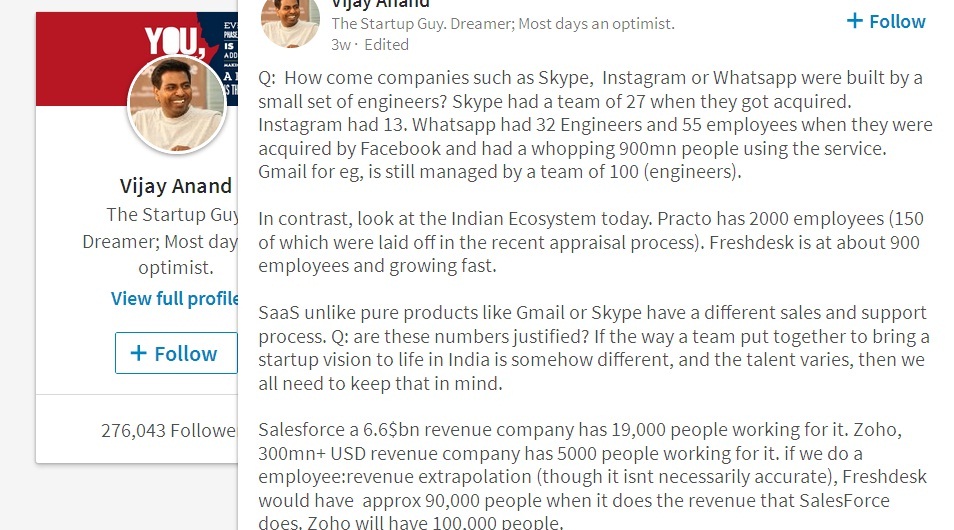 Naturally, the post garnered a lot of attention on social media, more so when Girish Mathrubootham, Freshdesk’s founder and CEO, responded with a LinkedIn post titled, ‘My response to Vijay Anand’s question on why does Freshdesk need so many employees?’

Girish pointed out that comparing Instagram and WhatsApp with Freshdesk and Practo is flawed, as it doesn’t make for a fair comparison. He said, “Comparing Instagram and Whatsapp to Freshdesk and Practo is simply wrong. These companies are outliers and are beneficiaries of Facebook acquiring them at a premium because of the strategic value. A fair comparison will be other B2B Saas companies. If we can’t compare apples to apples, then the rest of the arguments fall flat.” 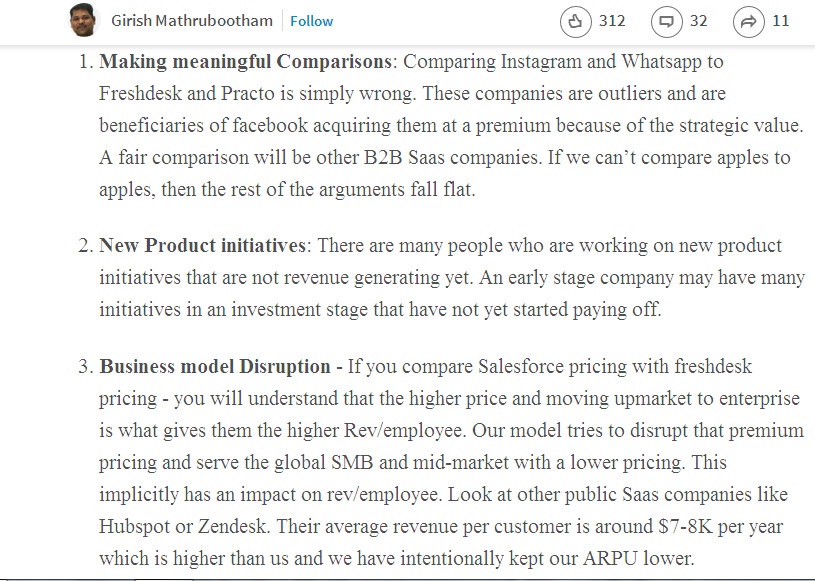 Furthermore, he pointed out that “There are many people who are working on new product initiatives that are not revenue generating yet. An early stage company may have many initiatives in an investment stage that have not yet started paying off.”

On the important question of low revenue per employee, Girish reasoned that moving upmarket to enterprise is what gives Salesforce the higher rev/employee. He added that when one looks at “other public SaaS companies like Hubspot or Zendesk, their average revenue per customer is around $7-8K per year which is higher than us and we have intentionally kept our Average revenue per user (ARPU) lower.”

He also pointed out that competitive differentiation also requires people. He reasoned, “Many US companies charge huge setup fees, implementation charges or Product Customisation charges.(Not services but things like data migration, theme customization etc) When you compete globally and want to win – offering these for free/lower cost becomes part of a business strategy that helps you win. SMB customers love this kind of support. This means we need some people on our team to do this.”

Lastly he pointed out to Vijay that the enterprise value of a business is not measured on rev/employee factor alone. “What attracted investors like Google Capital to Freshdesk is how much more efficient we are, as a Saas business, than the valley SaaS companies,” he concluded.

Cheekily he wished Vijay all the best for his premium newsletter business ‘Practical Startup Advice’ wherein he plans to talk about more insights like these.

Vijay meanwhile has stuck to his guns and continued to share his views on Twitter where he stated that his concern was that startups in India tend to hire 10x more.

1/ My concern has been over the fact that as startups in India we do tend to hire 10x more warm bodies. If each startup getting to a

He pointed out that if each company hitting $2 Bn in revenues will require 100K+ employees, it would lead to a shortage of talent as well as inflate wages, which could make things in the startup ecosystem difficult in general. He concluded that “As a startup we must aim to match, if not better the productivity that the startups of the west.” 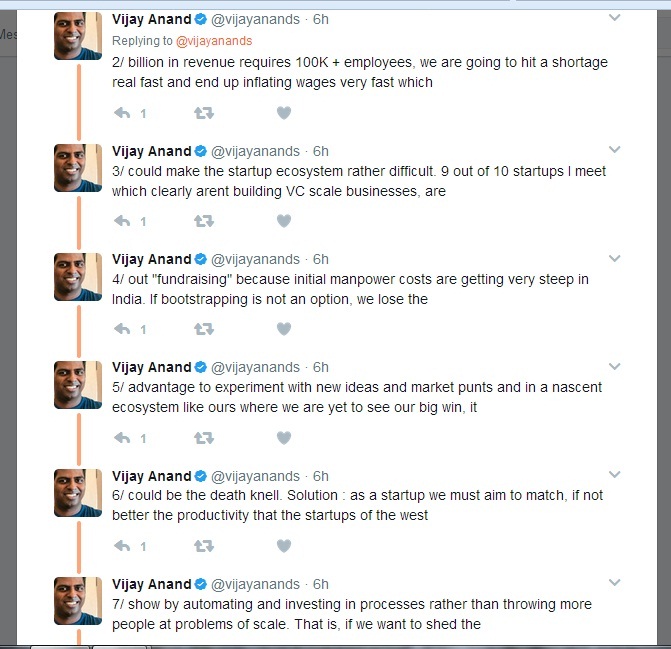 Whether we agree or disagree with the clashing founders, it cannot be stated enough – the Indian startup space is heating up and not just due to scorching weather.

Do you agree or disagree with Vijay’s views on overhiring in Indian startups? Drop in your views in the comments section below.