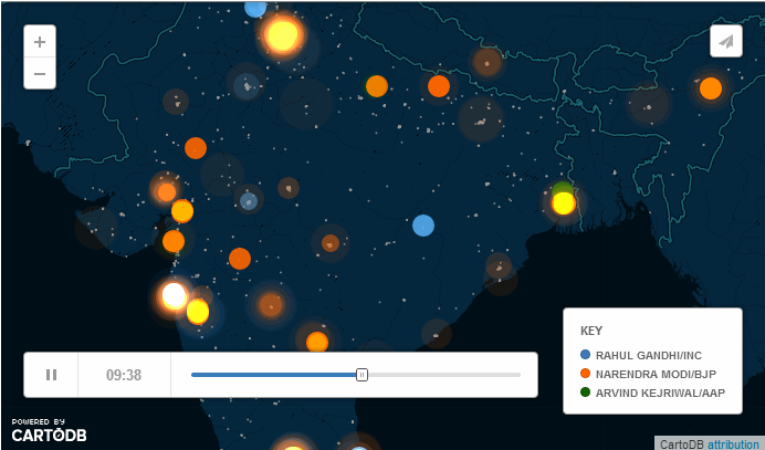 Twitter has finally revealed all the data around this year’s elections. We all know that this year’s elections was a keenly contested one where social media (primarily Twitter) played a big role in shaping up the future of many politicians and political parties.
According to the data shared by Twitter, the platform saw more than 58 million tweets around the general elections from Jan 1st 2014 till 11:59 PM of 16th May, 2014.

Over the past 24 hours, as the counting day was in progress, Twitter saw a little more than 2 million tweets being sent out by people on Twitter.

On the day of counting NarendraModi added the Highest number of followers in a single day. Starting his day at 3986878 followers and ending at 4091739, he added more than a lakh of followers in just one day.

He also went on to break the record (Sachin’s, of all people!) for the most ReTweeted tweet ever by an Indian. The following tweet of his has received more than 65k RTs and has also reached the mark of 10k, 20k, 30k, 40k RTs the fastest.

What’s more, of the 5 most RT’ed tweets around elections, 4 of them belong to Modi!

Talking about the elections and the usage of Twitter around it, Rishi Jaitly, Twitter India’s Market Director, says:

This is truly the first Twitter Election in India, with all major political parties and candidates actively campaigning & connecting with voters on Twitter. Similar to the Obama campaign, everyone knew that this Lok Sabha election would also be influenced by social media, particularly with over 150 million first-time voters between the age of 18-23 years old who are social media savvy with mobile-centric lifestyles. Twitter’s election strategy in India differed from other digital players – instead of bringing people to an election site, we brought the elections to the people. We formed mobile, TV and news partnerships to distribute elections-related Tweets on and off Twitter, so that every Indian voter can make an informed decision in real-time. That’s why it felt like the entire elections was being played out on Twitter – everyone could see Tweets from the main parties, politicians and voters on their mobile devices, on their TV screens or in their daily news reports, or follow key political & media accounts via a missed call to consume their tweets as text messages.

It is an undeniable fact that Twitter was the most effective platform during the elections, and the most buzzing as well. The way parties and politicians have used it is truly commendable and it goes to show how technology, and social media, have changed the way world’s largest democracy functions.