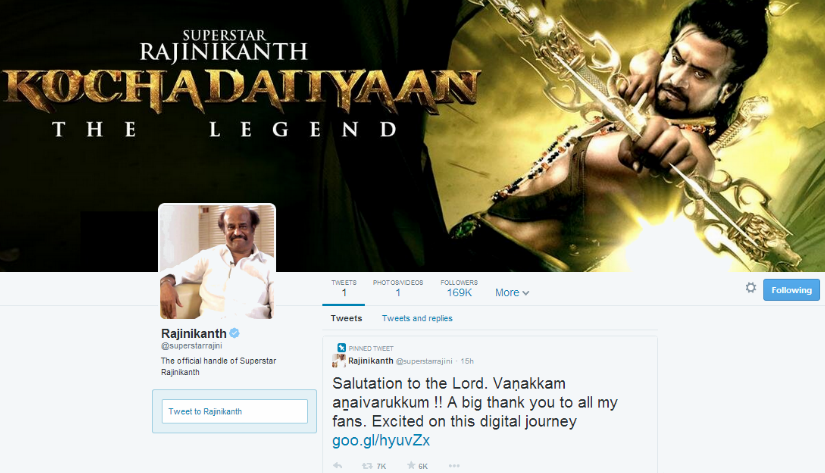 Yes, You heard it right. Thalaiva is on Twitter now. Tamil superstar Rajinikanth, made his much awaited debut on the micro blogging site Twitter yesterday. The actor’s official handle is @SuperStarRajini and interestingly received over 9,000 followers just in 1 hour, the number has now reached to over 168k followers. The popularity of the superstar was so avid that, even before he sent his first tweet he had nearly 17,000 followers.

Twitter verified his account within half an hour of its creation. And, according to Trendsmap Chennai, the handle began trending almost immediately in Chennai.

Salutation to the Lord. Vaṇakkam aṉaivarukkum !! A big thank you to all my fans. Excited on this digital journey http://t.co/79ea6MrDe3 — Rajinikanth (@superstarrajini) May 5, 2014

“I have always believed that my career graph is a miracle I owe my fans. I have been contemplating joining the social media platform for a while to connect with them, hear what they have to say and share my thoughts. Unfortunately I never got around to it until now,” Rajnikanth said.

To make his presence more viral, whosoever will follow @SuperStarRajini in the first week, will receive a ‘WelcomeGraph’, a personalised welcome picture from the icon. Fans can also follow the actor’s Twitter account by dialing, or giving a missed call at 080 6700 6666 to access his Tweets.

His wife Latha, daughters Soundarya, Aishwaryaa and son-in-law Dhanush are already on Twitter.

On the other hand Twitter’s Market Director, Rishi Jaitly welcomed the superstar and said, “This is truly an “only-on-Twitter” moment as Superstar Rajinikanth’s debut on Twitter also marks his debut in the digital space more generally. We welcome Rajinikanth to Twitter, are happy to support his launch on the platform and look forward to watching him use our mobile service to engage in live, public conversations with fans and other icons around the world.” he said.

Interestingly, Rajinikanth’s debut on Twitter coincides with the release of his upcoming film ‘Kochadaiiyaan’ directed by his daughter Soundarya, which hits theatres this Friday, and this Twitter debut is pointed as a publicity stunt by many for the movie.

Has Twitter really joined Rajnikant..omg..Twitter u are complete today! All the Rajni fans don’t miss the chance…lol… :p 😀

35K followers in 25 mins? i thought its just a rajnikant joke but he proved it, all those rajni jokes are not jokes. #Hero @superstarrajini — sonam (@Pink_Sangria) May 5, 2014

The new #Rajnikant twitter feed is hilarious! Everyone is getting an exclusive Kochadaiiyaan poster – I wonder what is exclusive here 🙂

today @twitter got Verified by none other dan @superstarrajini Twitter Welcome On #Rajnikant — Rahul Navgire (@Rahul_nav) May 5, 2014