Based on 307 complaints, Twitter took action against a total of 549 URLs, including 404 URLs for illegal activities

It suspended more than 37,310 accounts for child sexual exploitation and non-consensual nudity, as well as 2,880 accounts for the promotion of terrorism

Between November 26, 2021 to December 25, 2021, Twitter reported a total of 307 complaints, which is more than four times the number during the previous period when it received 76 complaints.

Based on these 307 complaints, Twitter took action against a total of 549 URLs, including 404 URLs for illegal activities, 60 for sensitive/adult content, 37 for abuse and harassment, and 27 for IP-related infringement. 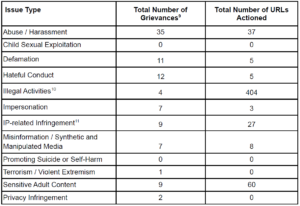 The number of URLs actioned is higher than the number of grievances because each grievance may identify multiple items including tweets, replies and accounts. The findings were published in Twitter’s India latest transparency report, issued in compliance with the new IT rules that came into effect last May.

Apart from these, Twitter also processed 81 grievances concerning account suspensions. The company claims that all of them were resolved and sent appropriate responses. It overturned eight account suspensions based on the complaints but other accounts remain suspended.

Between October 26 and November 25, 2021, Twitter had reported a total of 76 complaints, mainly dealing with abuse and harassment (24), defamation (11), hateful conduct (13), and misinformation or synthetic/manipulated media (7).

Often, a majority of these grievances are related to issues including verification and account access and thereby don’t fall under the ambit of the grievance system. As usual, these requests are excluded from the report.

Social media platforms including Twitter take many proactive measures to monitor content, especially for content promoting terrorism and child sexual abuse material (CSAM). The company monitors everything from media, text and illustrations on both the Twitter feed as well as in direct messages.

Towards this end, it claims to have suspended over 37,310 accounts for child sexual exploitation and non-consensual nudity, as well as 2,880 accounts for the promotion of terrorism.