Swiggy To Acquire Dineout In A $200 Mn Deal; To Take On Zomato’s Dine-In Biz

Swiggy To Acquire Dineout In A $200 Mn Deal; To Take On Zomato’s Dine-In Biz 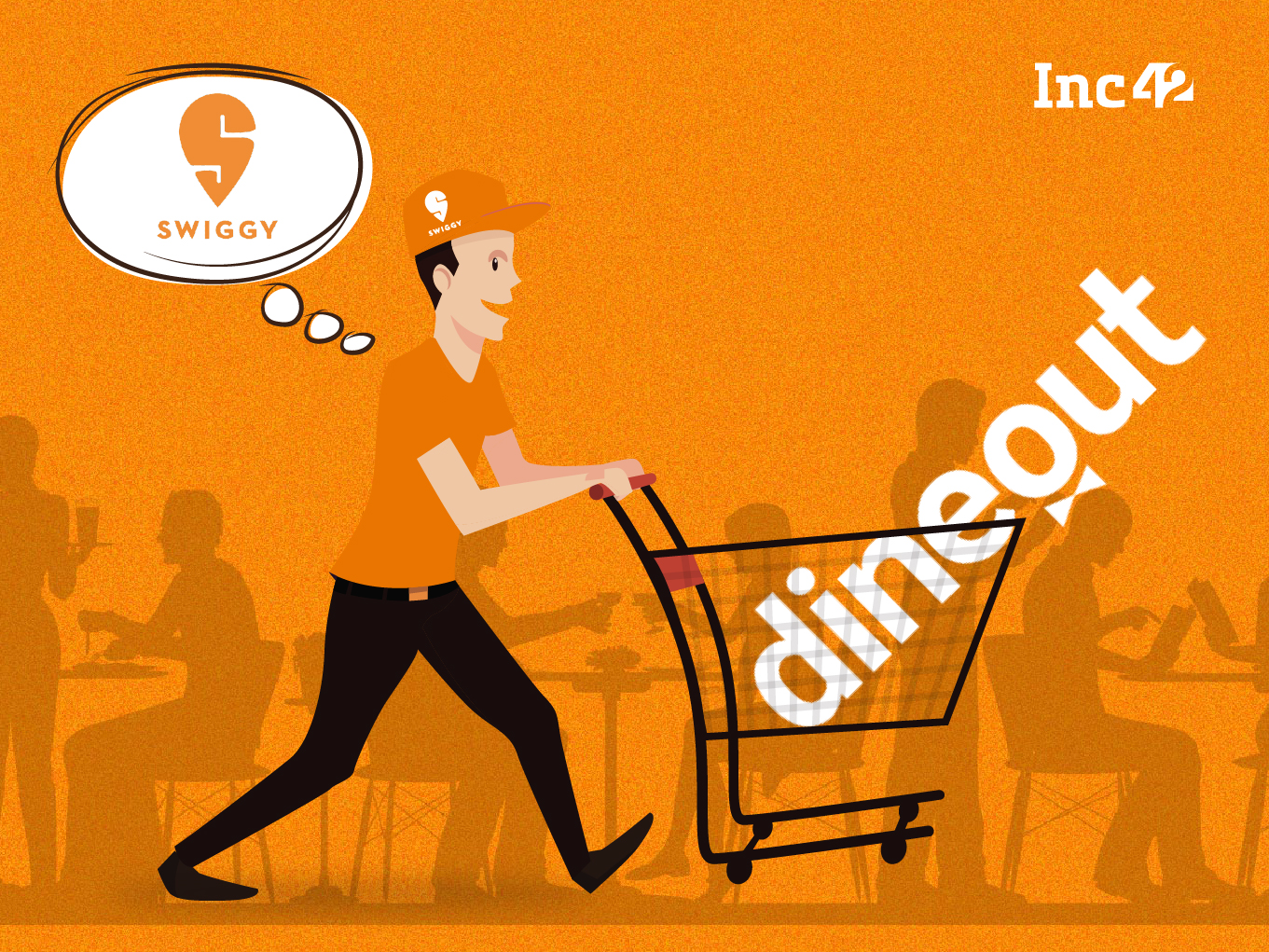 Food delivery giant Swiggy is in the final stages of acquiring Times Internet’s online restaurant table booking service platform Dineout. The deal is expected to be valued between $150 Mn and $200 Mn, multiple sources aware of the development confirmed to Inc42.

With this deal, Dineout’s majority shareholder, Times Internet will be exiting the company. Post the acquisition, Swiggy will absorb and retain the entire Dineout team (of 500+) and its products Book A Table, Dineoutpay, Dineout Passport, SteppinOut from its B2C offerings and inResto, Torqus from B2B offerings. The deal also includes Dineout’s Great Indian Restaurant Festival, a month-long festival where diners can avail 50% at more than 10k restaurants across the country.

Swiggy’s acquisition of Dineout is in line to take on publicly listed Zomato. The restaurant discovery and table reservation feature which was once the core business of Zomato before foraying into food delivery had remained unchallenged by Swiggy to date. However, with this acquisition, Swiggy will check on all the boxes it required to gain further advantage in this heavily cash-driven duopoly market. The deal is likely to conclude by March-end, a source added.

“With the acquisition of Dineout, Swiggy’s B2C offerings will be much stronger,” said a person aware of the development. Swiggy, which started as a food delivery business, has invested heavily in the quick commerce business, but is yet to make a dent in the dine out business.

As per people aware of the development, with the acquisition, Swiggy will get its hands on over 20K Dineout Pay enabled restaurants as well as Dineout Passport, which allows a member to get discounts from partner restaurants while dining in.

As per Zomato’s RHP, Zomato has partnered with 25.4K restaurants in FY21 with 6k on Dining Out with 1.5 Mn Pro members. Zomato PRO has reported sales revenue of INR 57.5 Cr in FY21, a noticeable drop from INR 87.8 Cr in FY20. Zomato has further mentioned that on March 31, 2021, 389,932 active restaurants listed on it for dining out. Citing Redseer report, Zomato further added that around 3.3 Mn table reservation was made through Zomato in fiscal 2021.

On the other hand, Dineout is likely to cross INR 100 Cr in revenues for FY22. In Q3 FY22, it had clocked a total revenue of around INR 50 Cr., a source added. Currently, Dineout seats approx 5 Mn diners a month at partner restaurants.

Apart from getting restaurant discovery, bill payments and table reservations features, acquiring Dineout will also help Swiggy get its hands on SteppinOut, an event and experience curator. SteppinOut will enable Swiggy to host multiple types of offline events such as ranging from food festivals, night markets, stand-up comedy events, movie nights, among others.

With the peak of the third wave subsiding, and various state governments relaxing Covid curbs, people will be more than eager to step out and socialise in such events.

Dineout had acquired SteppinOut earlier last year to expand its portfolio. Apart from this DineOut’s Zomato Pro like feature Dineout Passport will further create a new avenue for revenue, which will also support Swiggy’s much anticipated IPO plans.

Founded in 2012 by Ankit Mehrotra, Vivek Kapoor, Nikhil Bakshi and Sahil Jain, Dineout connects diners to restaurant discounts and deals, while offering cashless payment experience. Dineout was acquired by Times Internet in 2014 and since then it has infused nearly $50 Mn in the company including the acquisition amount. This means Times Internet will be looking at over 2X returns.

The development of Swiggy acquiring Dineout was first reported by Live Mint.

Mail sent to Swiggy did not elicit any response at the time of publication.

It is interesting to note, a couple of days back, another Times Internet owned company- MX TakaTak, a social short video platform announced its merger with ShareChat’s Moj.

The development comes a few days after the Bengaluru-based Swiggy entered the decacorn club with $700 Mn investment. The funding round was led by Invesco and also saw participation from new investors including Baron Capital Group, Sumeru Venture, IIFL AMC Late Stage Tech Fund, Kotak, Axis Growth Avenues AIF- I among others.

In its Q3 FY22 filing, Zomato said that it will be investing $400 Mn in quick commerce, meaning the foodtech giant will be at a look out to find more quick commerce businesses. It had already invested $225 Mn in Blinkit.

Other players in the quick commerce segment include Dunzo, Zepto, Ola Dash, BigBasket, among others.