Supreme Court Verdict: Aadhaar Legal, Mandatory Only For IT Returns And PAN 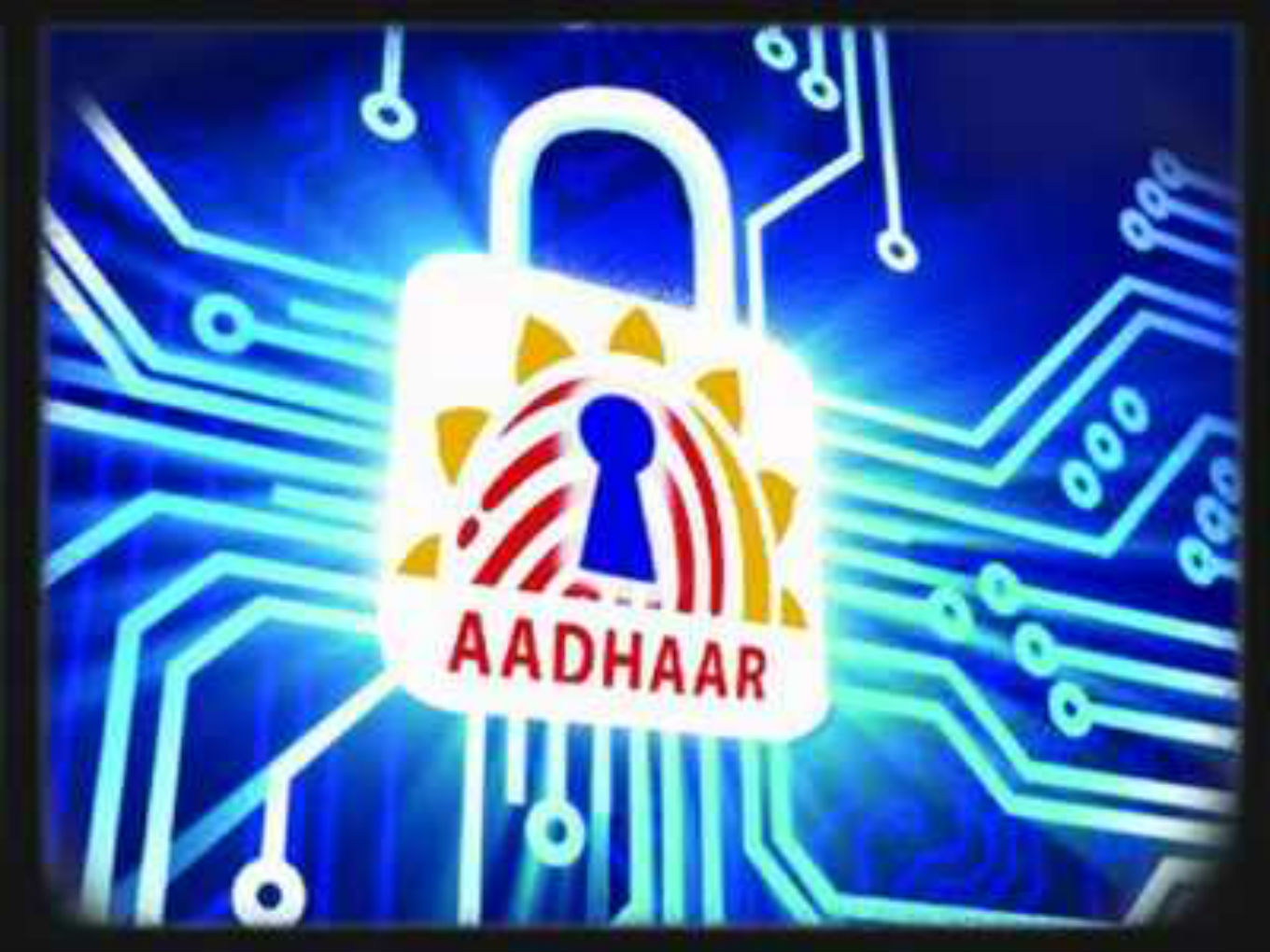 The SC has also struck down Section 57 of the Aadhaar Act. Now, private companies won’t have the authority to demand one’s Aadhaar ID

To be or not to be is no longer the question. The question has now been pushed into the details — what form should it exist in and how should it be implemented. We’re talking about Aadhaar — the controversial, much-debated, biometrics-based identification system for 1.3 Bn Indians.

After months of waiting, the landmark judgement of the Supreme Court (SC) on Aadhaar’s constitutionality is finally out and, as expected, the ruling is in favour of the Aadhaar Act. The SC ruled that Aadhaar is mandatory only for filing income tax returns and for the allotment of PAN. It won’t be essential for opening bank accounts or getting SIM cards from telecom operators.

Welcoming the verdict, Nandan Nilekani, the ex-chairman of UIDAI who coined the term ‘Aadhaar’, tweeted, “This is a landmark judgement in favour of #Aadhaar. More than just opining on the constitutionality of the act, the SC has unequivocally validated the founding principles for Aadhaar. Aadhaar is a unique identity project that is critical to the developmental goals of the nation.” 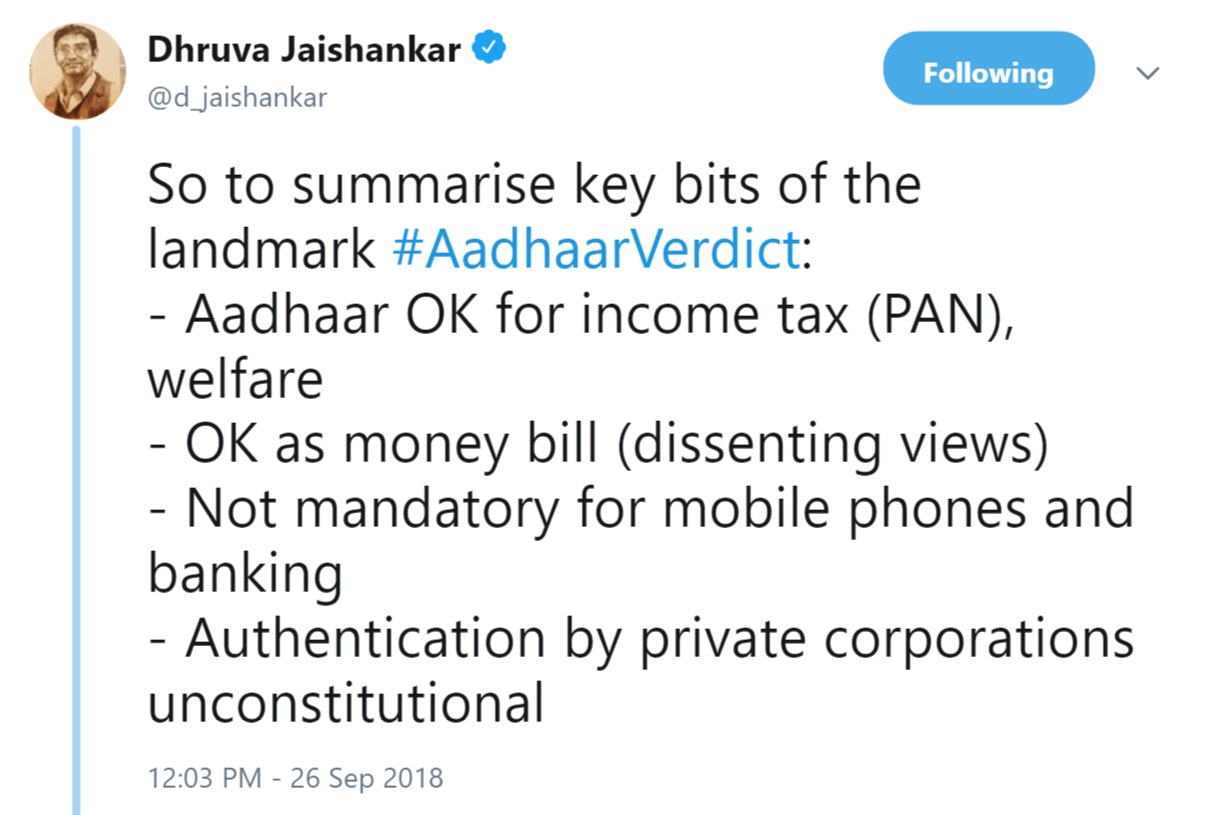 The constitutional validity of Aadhaar, backed by the Aadhaar Act, remained unquestioned at large with four out of five judges on the SC Constitution bench — Chief Justice of India Dipak Misra and Justices A K Sikri, A M Khanwilkar, and Ashok Bhushan — favouring the Aadhaar Act. The fifth judge — Justice Dhananjaya Y Chandrachud — however, said that Aadhaar is wholly unconstitutional.

Making some starkly different observations from the other judges, Justice Chandrachud stated that it can not be the institutional responsibility of UIDAI to protect the data of citizens.

The Aadhaar leaks and the right to privacy arguments were not enough to get the bench to declare the Aadhaar Act as unconstitutional.

While the Aadhaar verdict has been viewed as being in favour of the central government and the Unique Identification Authority of India (UIDAI), it also provides some relief to the petitioners. Constitutional validity notwithstanding, the bench has fine-tuned the Act, striking down some of its provisions.

Satisfied with the defence mechanism improvement against the Aadhaar data leaks, the SC has also defined who has the authority to seek Aadhaar data and who doesn’t.

Speaking to Inc42, Vivek Wadhwa, Distinguished Fellow, Harvard Law School and Distinguished Fellow and professor, Carnegie Mellon University Engineering, Silicon Valley responded, “I think that the Supreme Court has made a very wise decision. Aadhar is very important, it has provided identity to hundreds of millions of people who lacked this and were left out of the formal economy. But when the private industry started using it and its privacy was compromised, things went too far.”

There needs to be a balance and the judgment mandates this. If Aadhar had been left unchecked, India would have gone the way of China and become a surveillance state, in which both government and industry collude to control and spy on the population, says Wadhwa.

Here are the salient points of the SC’s 1448-page Aadhaar Verdict:

Speaking of the Aadhaar verdict, Gopal Bohra, Partner, N.A Shah Associates told Inc42, “This judgement of Apex Court will set the guidelines on various ongoing controversial areas where the use of Aadhaar was made mandatory and consequential concern over data privacy.”

He added that the Apex Court has applied balanced approach making mandatory use of Aadhar at certain places such as filing of income tax return atleast for those individuals who are eligible to obtain Aadhar number and also restricting the data sharing with private parties. This ruling making mandatory Linking of Aadhaar with PAN will help the government in curbing tax evasion.

Bhavin Patel, Co-founder, and CEO LenDEnClub told Inc42, “This verdict is really good that the Supreme Court has accepted Aadhaar’s constitutional validity. There have been many questions regarding the data security, the surveillance state, privacy problem etc. and with today’s verdict, the air is now clear around those concerns.”

The timeline has been prepared by Shreya Ganguly

The Aadhaar Case hearings ran for 38 days — the second-longest hearing in India’s judicial history after the Kesavananda Bharati Case of 1973 — and the case was deliberated for five months.

In January 2018, the Constitution bench had started the final hearing on a batch of petitions clubbed with the Puttaswamy case that challenged the Aadhaar Act (introduced in Parliament as the Money Bill) on grounds that it violates an individual’s fundamental right to privacy.

It’s worth noting that the government had earlier made Aadhaar mandatory for availing a host of benefits such as schemes for the below poverty line category, LPG subsidies, midday meals in schools, etc. This was followed by the diktat that private companies would have to ask their customers/users to link their Aadhaar with services such as banking, payments, SIM cards, etc.

The Supreme Court later clarified that it had never given any such order.

A former Judge of the Karnakata High Court, Justice K S Puttaswamy, along with a host of other petitioners, opposed the government’s move to make Aadhaar mandatory for availing social security benefits and other services.

The Justice K S Puttaswamy case writ petition (civil) no(s) 494/2012 has already made history as the nine-judge bench of Supreme Court, while hearing the case, recognised the Right to Privacy as a fundamental right last year. Today’s SC judgement has now sealed the legitimacy of Aadhaar, while restricting the scope of its uses — a balanced decision overall.