#StartupsVsCovid19: Fitness, Yoga Go Virtual In India As Apps Take Over From Gyms

#StartupsVsCovid19: Fitness, Yoga Go Virtual In India As Apps Take Over From Gyms 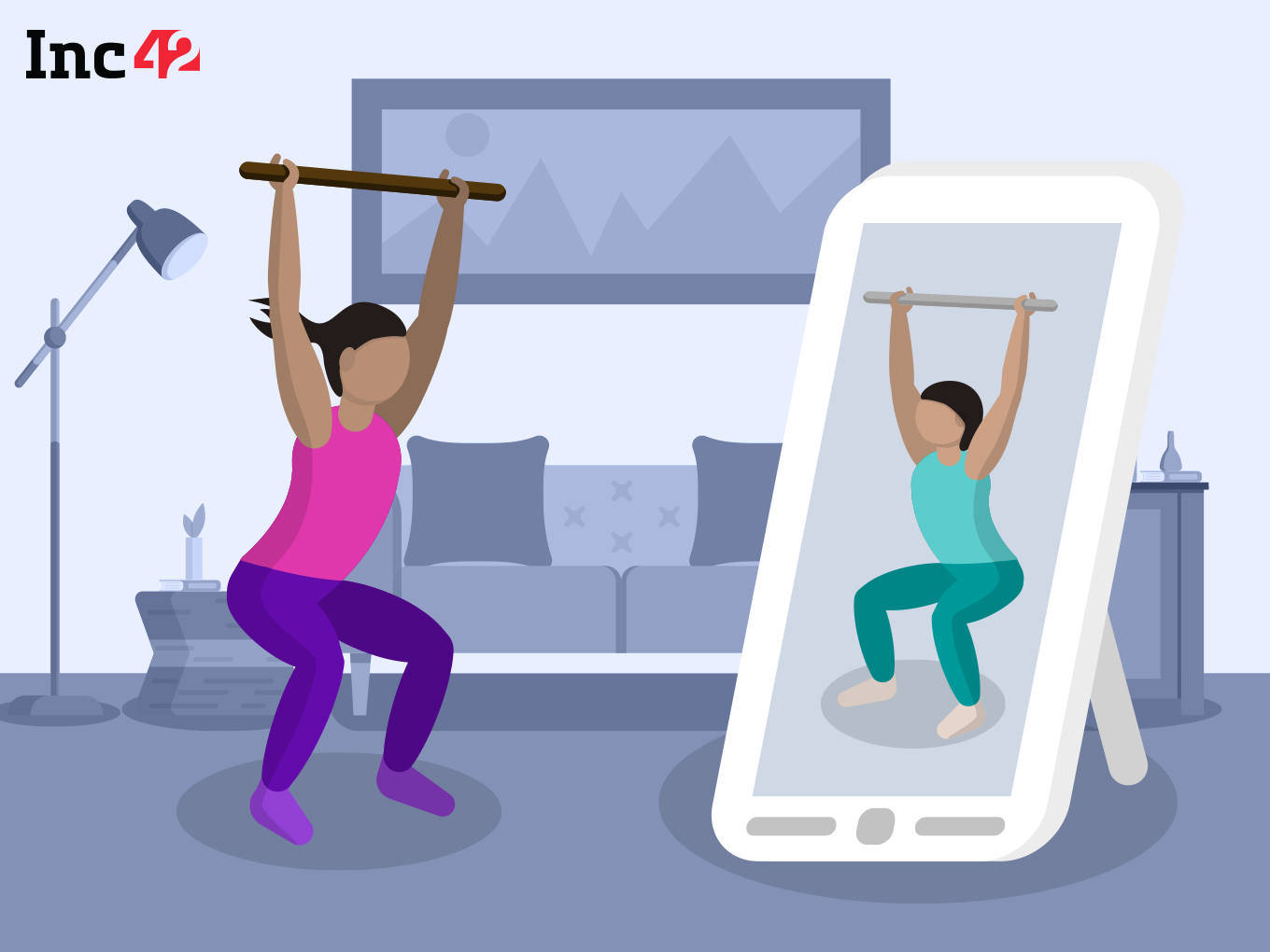 Social distancing and good hygiene mean going to the gym or yoga studio is out of the question, even if there’s one in the housing complex or apartment building. But sitting and working from a corner of the house can tend to build lethargy.

While many might appreciate a small break from working out, it’s not something one should make a habit of. Sedentary lifestyle tends to result in diseases, obesity and build-up of fat, which is definitely a health risk, social distancing or not.

So the alternative is to achieve those fitness goals and step milestones at home. So here’s how India is working out virtually.

Focus On Physical And Mental Wellbeing

Curefit cofounder Ankit Nagori reiterated that the lack of physical exercise can lead to problems such as impaired immunity, restlessness, sleep-related issues, poor cardiovascular health, impaired thinking and creativity, as well as increased anxiety. Bengaluru-based Curefit has launched online live fitness classes under its Cultfit brand with Cult.live. Members can not only get their daily workouts, but also compete with others and their friends to stay motivated through the lockdown.

Cult.live classes can be accessed on all smartphones, or can be streamed on desktops and viewed on television screens as well. The sessions are conducted across fitness activities such as strength, cardio, Curefit’s HRX workout modules, yoga, and dance every day of the week.

Similarly, GoQii, which offers a fitness tracking band and an application with health-related videos, has shifted its focus to coronavirus related fitness videos for the time being instead of virtual coaching and tracking. The mobile application has added new videos which provide tips on how to do home homework, improve nutrition in the diet, and increase immunity.

These videos are also taking care of the mental aspect as well. Mumbai-based GoQii claims that some videos are focussed on improving emotional and mental wellbeing, which helps users cope with the ongoing pandemic situation with more positivity. According to founder and CEO Vishal Gondal, humans need to be active mentally and physically. “There are yoga and meditation shows as well,” he added.

He noted that these practices keep us happy, busy, and healthy. However, the current lockdown is creating boredom, anxiety, panic, stress, depression and loneliness.

“People are not sure how to work productively from home. And being completely homebound is making a lot of people uncomfortable and difficult to handle the situation,” GoQii’s Gondal added.

Thanks to the prevalence of video streaming and the acceptance for virtual lessons, Indian startups are not just offering classes online but are trying to replicate the experience of a fitness centre Bengaluru-based fitness startup Oga is aiming to offer an in-studio experience by providing fully interactive workouts.

Founder Ashish Rawat said that the startup is leveraging proprietary technology which compares the movement of 19 joints in real-time. A trainer then provides feedback to users based on the data collected. “Users can do yoga, home workout and dance on our platform with our system correcting their postures, tracking their repetitions and judging their dance movements,” Rawat added.

Fitness Apps On The Rise

Fitness apps have seen tremendous growth in usage in the past few weeks, and according to a report by App Annie, Indians are flocking to such virtual workout apps.

The report states that there was a 30% increase in the number of downloads of fitness apps in India during the week of March 22 to 28, as compared to weekly average downloads recorded in January and February. During the same period, consumer spending on fitness applications increased by 60% in India, which is quite more than the global average of 50%. 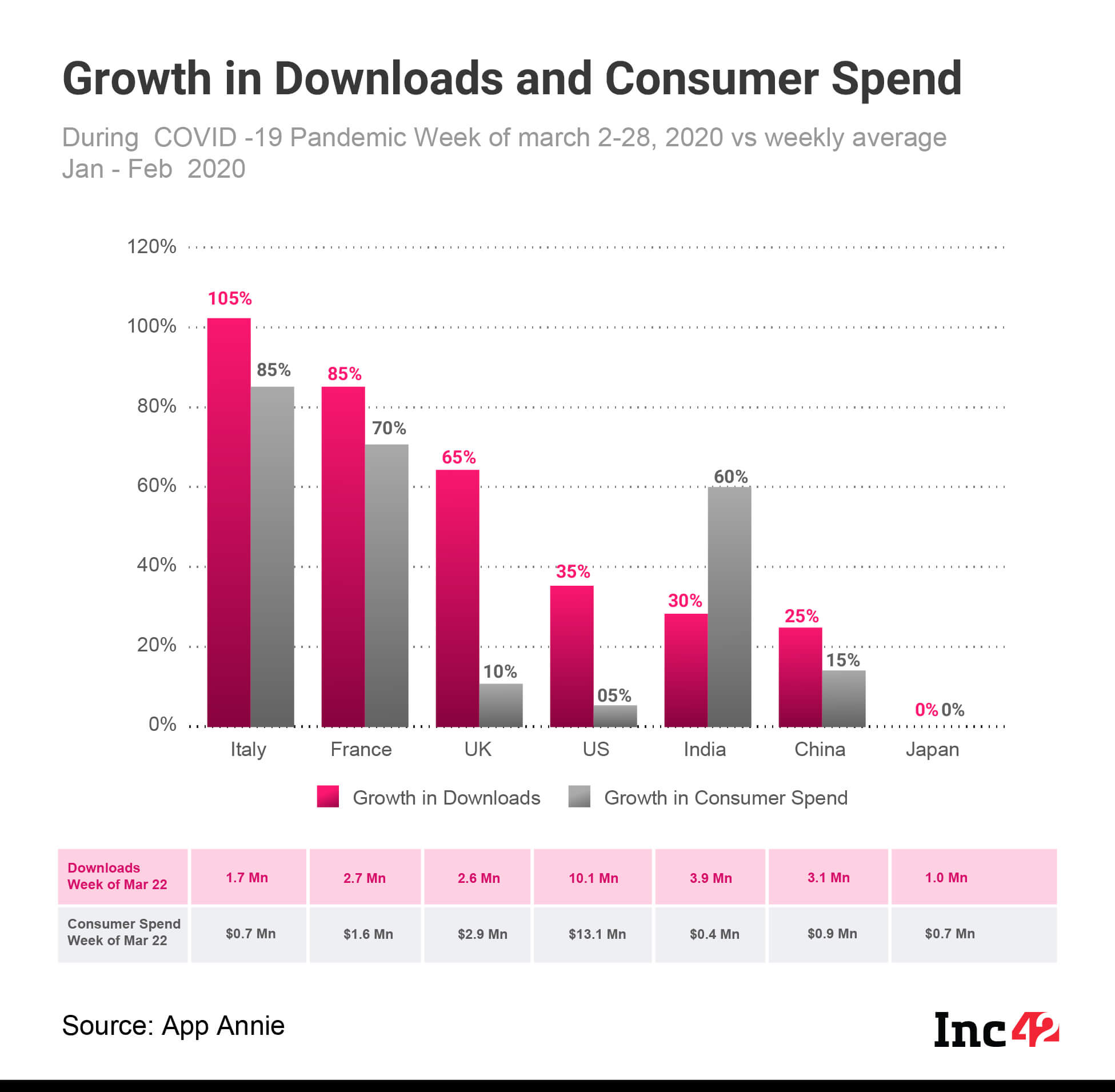 These numbers are backed by claims of Indian startups as well. Curefit said 200K people joined its Cult.live sessions within a week of launch. “Over 15K users are doing live yoga and meditation classes with us every day while this number has seen a 10X increase over the past week. We have also witnessed a 5X increase in the number of people speaking to our therapists via video calls,” Nagori told us.

Even Oga, which is currently in the beta stage is witnessing increased usage of the fitness platform. “We have seen an increased usage among our beta testers and are getting a lot more access requests,” founder Rawat said.

Meanwhile, traditional fitness centre chains such as Gold’s Gym have also started to conduct their fitness classes online. But with the lack of digital infrastructure, these players are conducting their classes on social media platforms like Facebook, YouTube, and Instagram.

Speaking to Inc42, Shraddha Sheth, vice president of marketing, sales and operations, said that Gold’s Gym has continued to connect with its members and subscribers via social media platforms. “These videos are helping our users to continue with their fitness journey in the safety of their home,” she added.

Moreover, workout videos uploaded by Gold’s Gym are gaining popularity on social media platforms. Sheth said that the video impressions have gone up by 79% while views have spiked by 46% as compared to the average number of views and impressions generated on previously uploaded videos.