#StartupsVsCovid19: Indifi’s Alok Mittal On The Power Of People And Their Collective Passion

#StartupsVsCovid19: Indifi’s Alok Mittal On The Power Of People And Their Collective Passion

Alok Mittal, cofounder and CEO of Indifi, joined Inc42 in the latest ‘Ask Me Anything’ session

He spoke about mobilising tech leaders, innovations to help flatten the curve and more 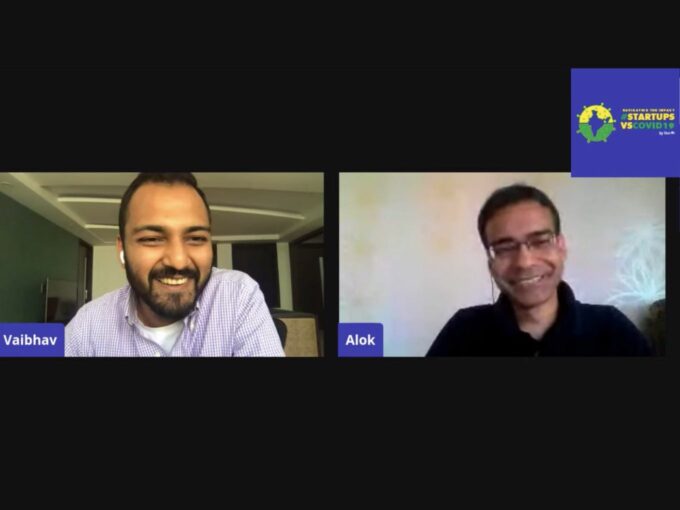 Unprecedented times call for unprecedented actions — following the coronavirus pandemic in India, we have seen mobilisation across sectors and communities in the country. Billionaires, movie stars, NGOs, tech developers, investors and startups founders have shown togetherness in these tough times. One such community initiative led by startup founders is ‘StartupsVsCovid-19’.

Started from a phone conversation between Udhyam founder Mekin Maheshwari and Indifi founder Alok Mittal, ‘StartupsVsCovid-19’ has grown from a founding group of four in mid-March to over 1000 people today. Along with Mittal and Maheshwari, Urban Company cofounder Abhiraj Bhal, and Bounce cofounder Vivekananda Hallekere were the founding members of the group.

On the eighth edition of our ‘Ask Me Anything’ series, Inc42 cofounder and CEO Vaibhav Vardhan hosted Mittal, and the conversation revolved around the vision to mobilise the community, the startup innovations helping flatten the curve, open-sourcing the framework to amplify the impact, the current funding environment for startups and more.

Talking about the genesis of the initiative, Mittal said, “The intent of starting this group was to bring a close group of people, literally four or five people, and explore whether we can be of service in the fight against coronavirus crisis.”

The group focussed on capturing some of the skill sets (problem-solving, agility, and technology thinking) that are germane to startups and make them available to different people such as policy owners, or citizens at large. According to Mittal, this thought resonated in minds of a lot of startup folks, who were willing to be of service in these times. And that was the main reason why once the group was set up, it multiplied and grew organically.

“I think this is a testament to the Indian startup community which obviously wants to create wealth for themselves and their companies but are also equally responsible and participant, in a crisis like this,” he added.

Under a month into operation, the coalition launched a telemedicine helpline for four state governments (Karnataka, Punjab, Odisha and Maharasthra), self-reporting tool for citizens to report symptoms, regional language content in 10 languages for citizens outside Tier 1 cities,  launched a social media campaign #ApnaDeshApnaMask which reached over 3Mn people on Twitter within 36 hours, inspired the formation of an INR 100 Cr fund under the Action Covid-19 Team (ACT), and a digital platform Droneman.in which aims to connect registered drone startups with local government authorities.

People And Their Passion Is Everything

The impact of this group has clearly been significant but is it possible to open-source its framework to amplify the impact? Mittal thinks this is a space where a 1000 flowers blooming is not a bad thing. There is no need for consolidating all these efforts into one scalable organisation or initiative

“Some founders have felt comfortable working under this group but I also know of a lot of founders who are organising their own small teams behind a purpose that is dear to them. If there is one big learning from startup world, it is that people and their passion is everything,” he added.

It’s a personal choice for these entrepreneurs in the face of grave economic and social uncertainty. The impact of coronavirus on the economy has been acute, so much so that industry experts have recommended startup founders to act like wartime CEOs with an undivided focus on survival.

Talking of survival, Mittal drew inspiration from the dot-com crisis and how businesses fared in that time of economic downturn. He said in such an environment, bootstrap models work. There will be an opportunity for great businesses to be built in a downturn but the approach will not be to raise $10 mn and spend it in marketing instead the approach will be to look for revenue streams to get funded by customers.

“If you look at the dotcom crisis, various companies came out of it  — InfoEdge, Bharat Matrimony. While, some of us raised external capital initially but when crisis struck us, none of us raised capital and so it was back to the bootstrapping world,” he added.

With most offline businesses have shut down, and consumer spending dropped by a sizeable amount, companies are aggressively pivoting towards the few business models that are able to continue their operations. But is there a logic to this madness? Mittal believes the core of the company is defined in times like this.

“Whether we like it or not, in buoyant times, we do ten different things because we think there is optionality to that.  So I do believe downturn take companies closer to our core and many times, that core also gets redefined.”


Message From Our Partner