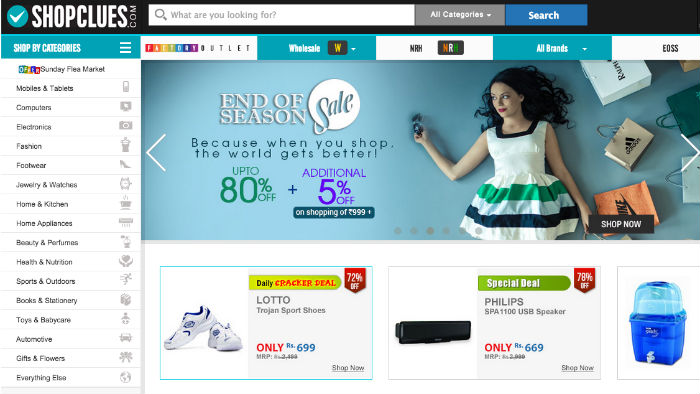 Three year old Gurgaon-based Clues Network Pvt Ltd which runs and operate online marketplace Shopclues.com has raised $100 Mn in Series C round of funding led by Tiger Global and its existing investors Helion Venture Partners and Nexus Venture Partners. This rounds takes the total funds raised by the company to $115 Mn and values it at about $350 Mn.

Shopclues will be investing the funds raised in technology, marketing and will work to enable more and more sellers to come on its platform.

“Our focus is to be the largest platform for unstructured, mass market, high-margin product categories,” says,” said Radhika Aggarwal, co-founder and chief marketing officer at Shopclues.

The ecommerce marketplace plans to close this fiscal with INR 2,000 Cr. in gross merchandise volume (GMV) and break even in mid 2016.

According to sources, this unique aspect of Shopclues has made the company an attractive buy for the other bigger ecommerce players, while for the founders of the company their focus is to scale the business and not on selling it.

Shopclues was founded by former Wall Street tech analyst Sandeep Aggarwal with $2 Mn in funding and eBay executive Sanjay Sethi alongwith Radhika Ghai Aggarwal and Mrinal in July 2011. The company had raised $10 Mn in Series B round in March 2013 and prior to that it had raised around $5 Mn. The global incubation and the investment wing of Japan’s ecommerce company Netprice.com – Beenos is also an investor in Shopclues.

In 2013, Shopclues has gone through hard times, when Sandeep Aggarwal, a former equity research analyst for a San Francisco-based financial services firm was arrested in July 2013 by FBI in San Jose. In 2009, when Sandeep was working as an analyst in Collins Stewart and was covering both Microsoft and Yahoo for his research firm, he was receiving regular updates from his sources in Microsoft and passed on very specific information to Richard Lee, a portfolio manager at hedge fund SAC Capital over a phone call, upon learning about the upcoming Microsoft – Yahoo deal. Sandeep had later pleaded guilty for the same.

Post his arrest, Sandeep had disassociated himself from the company and Sanjay Sethi took over the role of CEO.