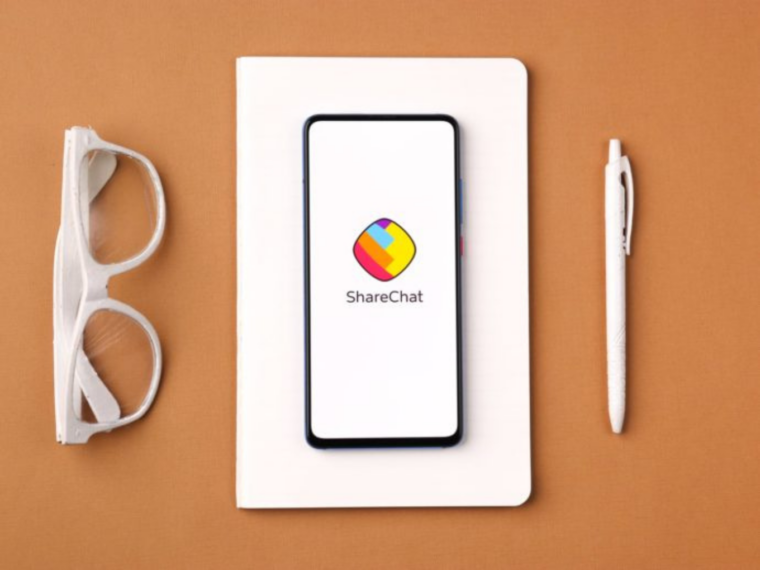 Most of the user complaints involved abusive language, sexually explicit content and spam

99,166 comments and 811 chat rooms were deleted by ShareChat during the month

ShareChat received more than 7 Mn user complaints (7,000,911) during March this year. The complaints were submitted via various reporting mechanisms available on the platform.

The complaints included those against user profiles as well as individual content for violation of community standards, as per the monthly compliance report for the month of March 2022 published by the Indian content sharing platform on Monday (May 2).

The social media platform received 9 requests from law enforcement agencies regarding various content pieces and user accounts. Giving the breakdown of the data, ShareChat said that it provided user data to authorities in 8 such instances.

In addition, two such requests from authorities were executed for content takedown and user ban on the basis of violation of community guidelines.

Most of the user complaints involved ‘Abusive Language’ (40.06%). This was followed closely by issues clubbed under the unspecified ‘Others’ sub-category (23.79%), sexually explicit content (6.67%), no category (6.63%), among others. ShareChat has a grievance redressal mechanism under which users can file their complaints under any one of the 22 sub-categories. 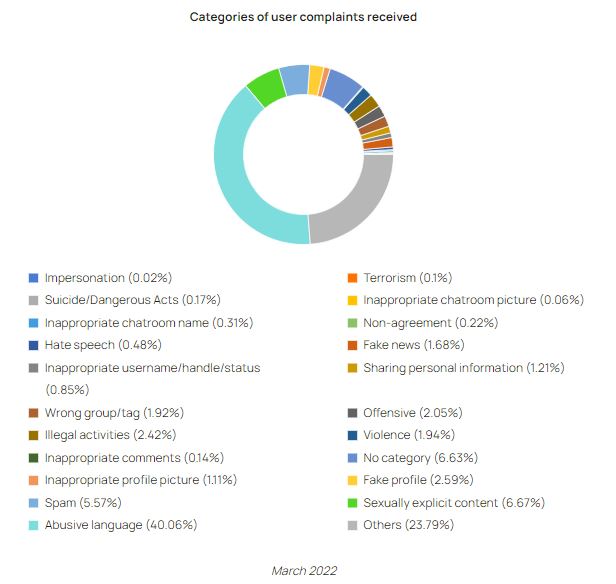 In contrast, ShareChat had received more than 5.6 Mn user complaints in February this year.

The content sharing platform took down 2.9 Mn content pieces for flouting community guidelines during the month. These included 2.5 Mn pieces of user-generated content and sexual content amounting to 1.79 Lakh pieces. More than 99,166 comments and 811 chat rooms were also deleted during the course of March this year. In addition, ShareChat also took down 55,903 pieces of content for alleged copyright infringement. 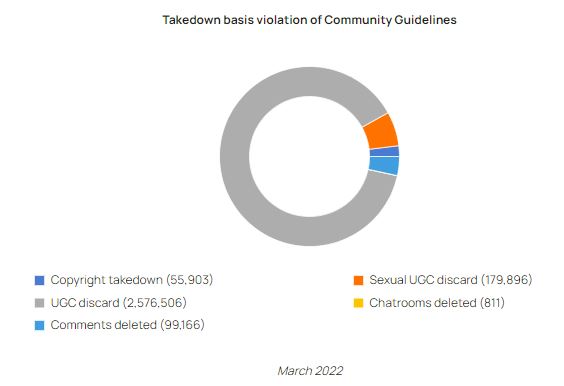 In comparison, ShareChat had taken down 2.8 Mn content pieces in February.

ShareChat also collated data of users banned from the platform. The bans were imposed across three broad categories – User Generated Content (UGC) ban where the user cannot post any content for a specified duration, edit profile ban where the user cannot edit any profile attributes for a specified time period and comment ban where a user is banned from commenting on any post for the ban duration.

Apart from this, Meta-owned WhatsApp also released its March compliance report today which said that more than 1.8 Mn WhatsApp accounts were banned in India in March this year. Facebook also took down 21.58 Mn content pieces for allegedly flouting norms in March this 2022. Google, in its transparency report, said it took action against 93,457 content pieces in India in the month of March.

Under the new IT Rules 2021, social media platforms with more than 5 Mn users have to mandatorily publish monthly compliance reports.