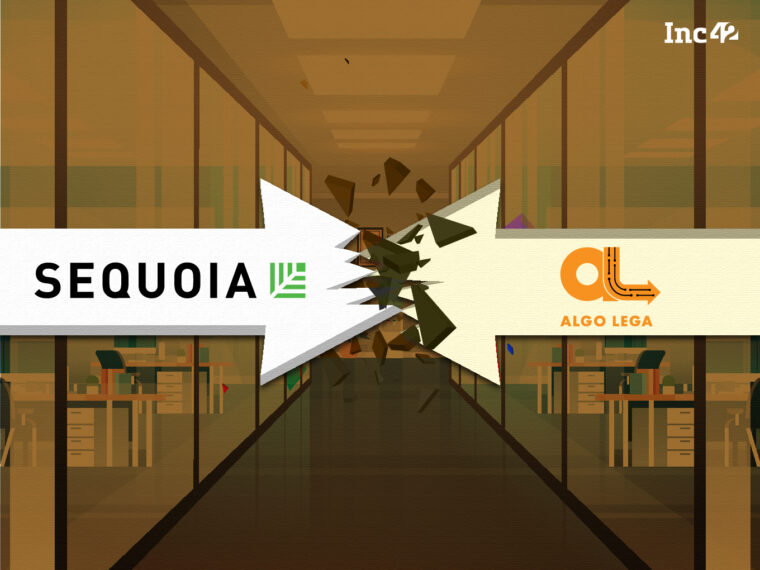 In the filing, it added that in the Zilingo’s case alone, it had detected irregularities of INR 68 Cr against Algo Legal

Sequoia Capital India has filed a 19-page affidavit to a local court in Bengaluru asking the court to dismiss Algo Legal’s defamation suit.

According to the filings seen by Reuters, Sequoia reported that Zilingo paid Algo and its related entities nearly INR 68 Cr between 2020 and 2022. Another concerning detail that came to light was that of the INR 68 Cr, INR 45 Cr was paid to Algo Legal. Further, INR 18 Cr was paid as fees to a firm ‘closely connected’ with Algo’s founder Sandeep Kapoor for an alleged software system (which has not been delivered yet).

In such circumstances, Sequoia has stated that the message that it had sent out to its portfolio companies is the right to freedom of speech. It prevails over the plaintiff’s right of reputation since “the statement was issued without any malice and without any intention to defame”, the VC firm said in the filing.

Sequoia denied the defamation allegations in the court filing, calling the lawsuit ‘frivolous and vexatious’. It said that the VC firm was “duty-bound to inform its portfolio companies when it detected certain irregularities”.

Sequoia’s filing, which has been seen by Reuters, has not been made public. Inc42 has been able to partly verify the affidavit and queries to Algo Legal remained unanswered till the time of publishing the story.  Sequoia India has confirmed the development but denied further comment.

Although a spokesperson for Algo as well as its founder Sanjeev Kapoor has reportedly affirmed to the court that the investigation into Zilingo’s affairs is ongoing and there was no final finding. Thus, Sequoia’s allegations in the filing were without merit.

Sequoia Vs Algo Legal – A Timeline

Sequoia India has been at the centre of major controversies surrounding the Indian startup ecosystem as four of its portfolio companies – BharatPe, Zilingo, Zetwerk and Trell have been in the negative limelight.

With the Zilingo’s story taking newer twists every week, Sequoia India had cut ties with its long-time legal partner on June 4, 2022. Founded by Sequoia’s former general counsel, Algo Legal had reportedly coerced some of the Sequoia portfolio companies into paying higher fees, threatening them with investigations from government officials.

Following this, Sequoia had written to its portfolio companies that it had stopped working with the law firm Algo Legal.

In the note to the companies, it had said that some concerning incidents involving Algo Legal had come to the VC firm’s Indian and Southeast Asian arm’s notice. Following the firing of the law firm, Sequoia stated that the matter has been referred to “legal advisors to seek their counsel on actions, if any, to be taken”.

Algo Legal had not been advisory to Zilingo, but other Sequoia India portfolio companies including Trell, Chargebee, Klub, Mamaearth and CRED.

On June 8, 2022, the Bengaluru City civil and sessions court issued notices to Sequoia Capital, Twitter and a number of media outlets. However, it refused to pass an order on the interim appeal for an injunction or a gag order on the publication of articles related to Algo Legal.

On June 18, 2022, Sequoia filed an affidavit seeking dismissal of the defamation suit, citing that it did its duty in informing its portfolio companies about the firing of Algo Legal.

Update from Sequoia added to the story.