On June 29, Chinese ecommerce platform Club Factory along with 58 Chinese apps, was banned by the centre citing data privacy concerns

Those who used to sell goods on Club Factory have yet to pay manufacturers of products they used to sell, as well as loans to pay 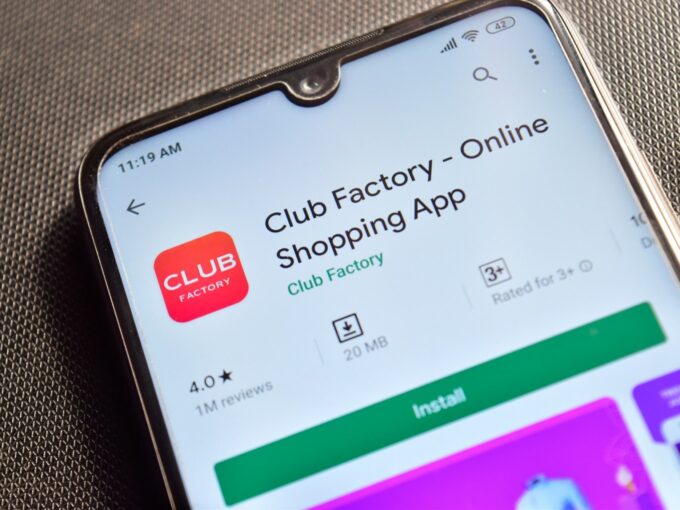 Delhi’s Amit Singh Sengar is distraught. He has been avoiding bank executives who, earlier this month, found their way to his home for the recovery of a loan.

Sengar, meanwhile, is waiting on last month’s payment worth INR 2.2 lakh for items he sold through the Chinese ecommerce platform Club Factory.

Traders who used to sell products on Club Factory have had it tough ever since the app was banned on June 29, as part of the Indian government’s crackdown on 59 Chinese apps believed to be jeopardising the data privacy of users.

After the ban was announced, sellers were asked by Club Factory to dispatch items for orders placed before the ban. The company assured the sellers that their pending dues would be cleared in July. Then, on July 14, sellers on the platform received an email from Club Factory, which said that since the government’s ban constituted a ‘force majeure’ event, the company was suspending payments to sellers.

‘Force majeure’ is a common clause in contracts which states that in the event of unforeseen circumstances, both parties would be temporarily freed from their obligations.

Since the ban, 25-year-old Sengar has been active on Twitter, frequently tagging the top-most ministers of the government in his tweets, pleading them to take action against Club Factory and protect the interests of Indian sellers. Other sellers’ tweets are more worrisome, as some threaten to commit suicide and pin the blame of their misery on the government. Still, others write that the government’s vision of an ‘Aatma Nirbhar Bharat’ is hollow if the interests of Indian sellers aren’t protected against a Chinese company (Club Factory). 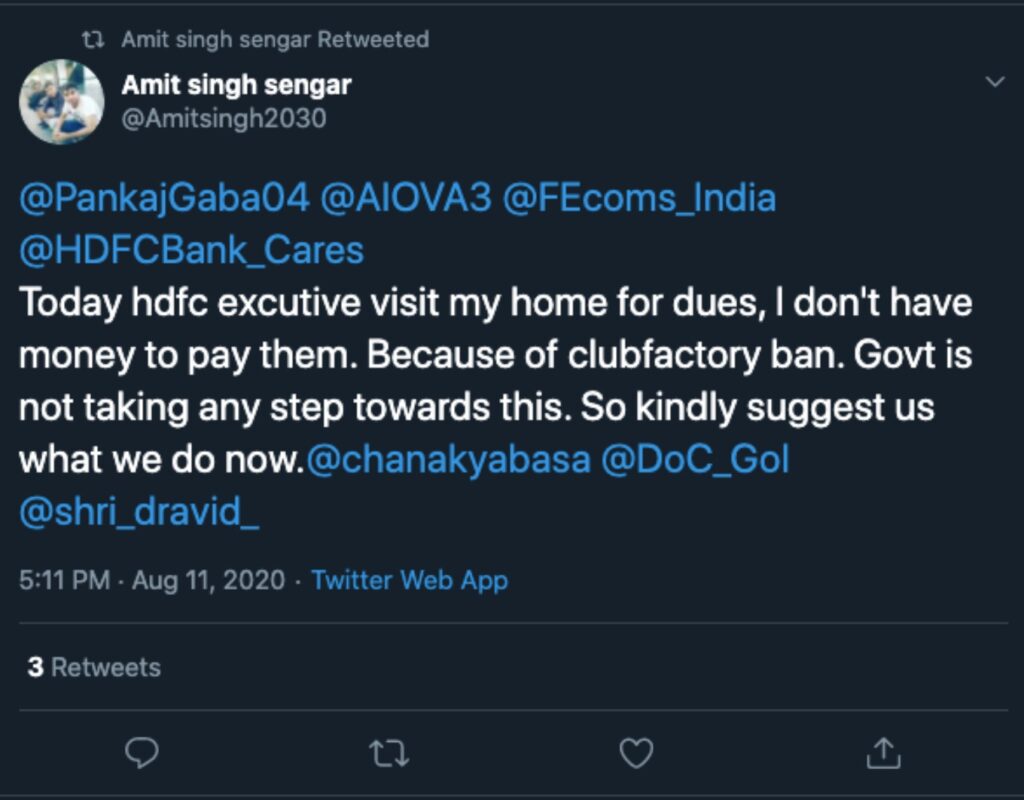 A common thread running through these tweets is the financial crisis that seems to have befallen these sellers, with a lot of them writing about not being able to pay off their debts and make payments to manufacturers of the items they used to trade on Club Factory.

Sengar tells Inc42 that he took a clutch of loans from banks, as well as digital lending applications MobiKwik and LazyPay, which he is now unable to pay.

While it was not possible to ascertain the number of sellers who are waiting on payments from Club Factory, according to Sengar, at least 3,000 sellers have been left in the lurch by Club Factory’s suspension of payments.

Another seller, 28-year-old Pankaj Gaba of Jaipur, says he’s waiting on INR 3.31 lakh in unpaid dues from Club Factory. “Every time Club Factory cleared our dues, they used to hold 20% of the amount, which we would get with the next payment,” says Gaba, who used to sell Kurtis and bedsheets on the platform. “However, after the lockdown was announced in March, they held on to the amount worth 20% of our dues and told us it would be released once the company’s entire staff returned to service. That never happened.”

Gaba received his last payment from Club Factory, worth around INR 80,000 on July 7.

More than a week after the ban on Chinese apps was announced, several media reports suggested that some of the banned applications, including Club Factory, were still functioning. Gaba, while confirming those reports, says that Club Factory had created a new domain and was accepting orders. The items for orders received before the ban were also dispatched for delivery.

“They were encouraging us to dispatch items for our pending orders, saying that our payments were secure and would be made on time,” adds Gaba, who, well into July, was dispatching items for orders placed on Club Factory.

Gaba says he has to make payments worth INR 2.4 lakh to the bank, while the remaining would be used to pay off manufacturers of the items he used to trade on Club Factory.

“We are barely able to make a 5-10% margin in ecommerce because there’s so much competition,” says Gaba, adding that his products were most popular on Club Factory, while Flipkart and Amazon haven’t proven beneficial for his business.

Once the payments were stuck with Club Factory, Gaba, out of desperation and a sense of foreboding, made an account on Twitter and started tagging the Prime Minister’s Office (PMO) and Home Minister Amit Shah, among other top functionaries of the government in his tweets, pleading them to take notice of the case of lost payments for Indian sellers on Club Factory. Twitter has now become an outlet for Gaba’s frustration with the government. 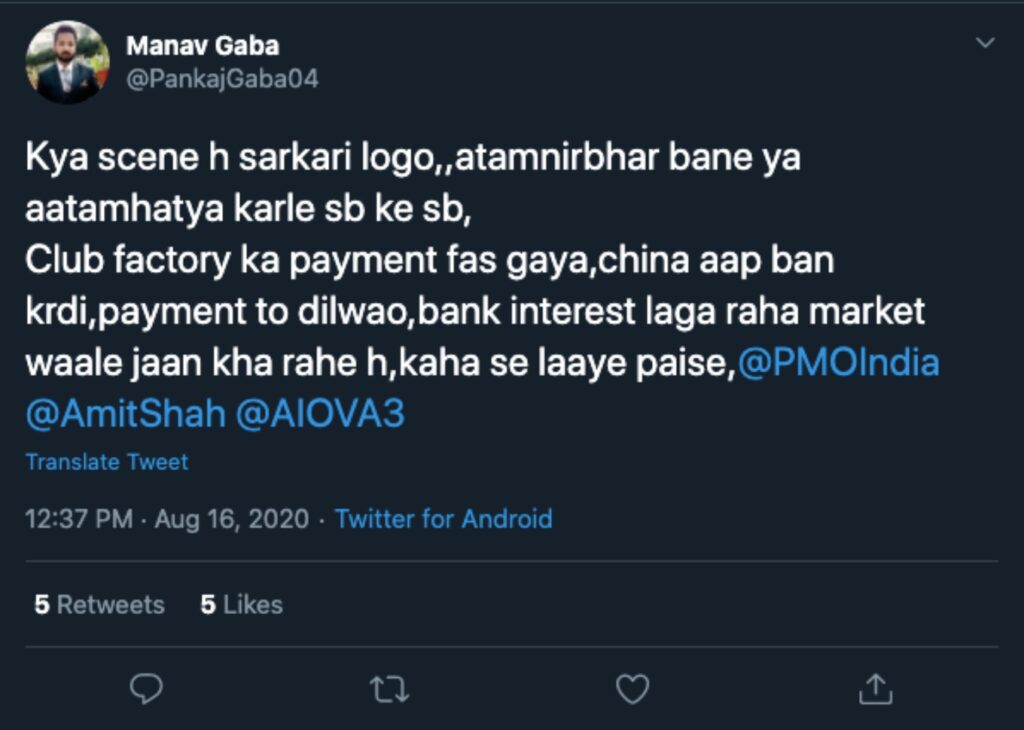 “Aatma Nirbhar bane ya Aatmahatya kar le?” (Should we become self-reliant or commit suicide) Gaba wrote on Twitter on August 16.

“I have been writing on Twitter every day this month but haven’t received a single reply from anyone in a position of power,” Gaba says.

The All India Online Vendors Association (AIOVA), which claims to be representing the interests of more than 2,000 sellers, sent a legal notice to Club Factory on July 16. In the notice, AIOVA said that by withholding payments to sellers, Club Factory had violated a Reserve Bank of India (RBI) circular dated March 17, 2020, ‘Guidelines on Regulation of Payment Aggregators and Payment Gateways’. According to the RBI circular cited in the legal notice, no payment aggregator can defer settlements to sellers beyond one day of delivery confirmation.

According to AIOVA, marketplaces are bound by RBI directives to keep the money collected on sellers’ behalf in escrow. Further, the ‘force majeure’ clause can’t be applied to escrow. An escrow account is one where funds are held in trust whilst two or more parties complete a transaction.

The AIOVA’s legal counsel Chanakya Basa tells Inc42 that the association hasn’t received a reply from Club Factory to its legal notice.

On August 13, AIOVA wrote a complaint to RBI. The complaint said that by withholding payments to sellers for more than a month since the items were shipped to customers, Club Factory had violated Section 28 of the Payments and Settlements Act, 2007. 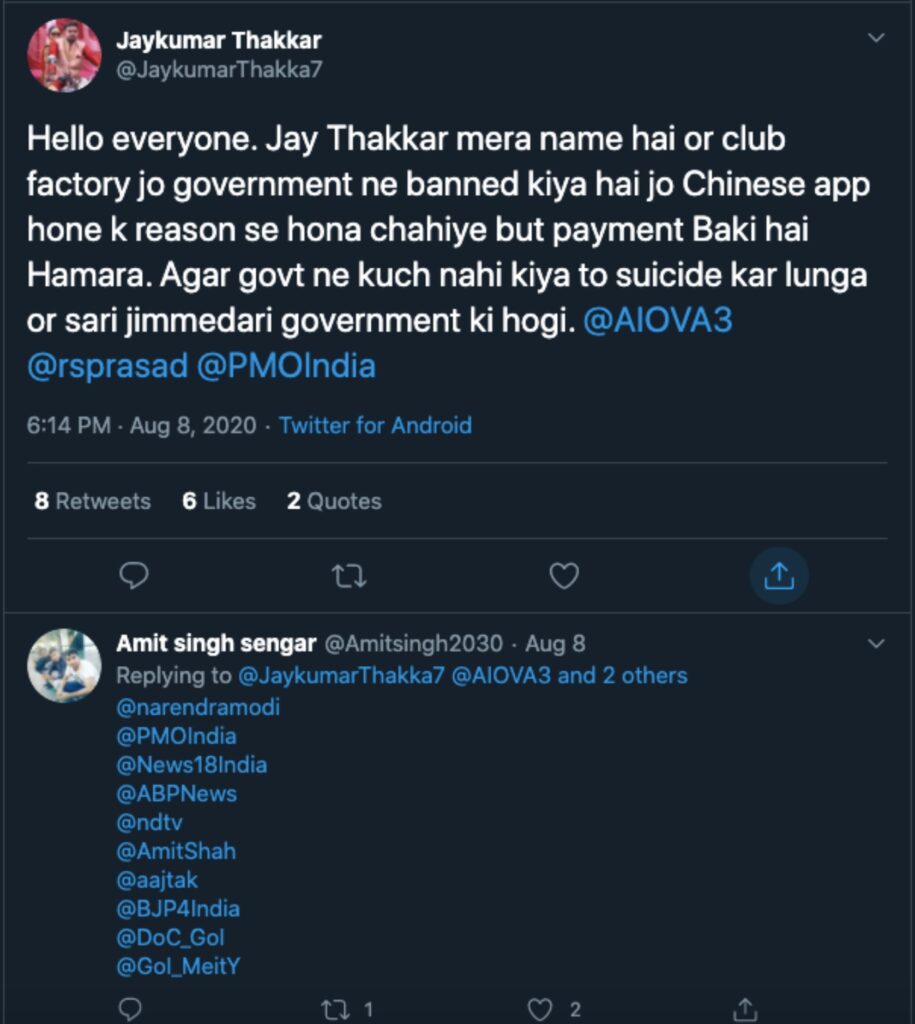 “Thousands of small sellers whose dues are in lakhs of rupees (are) pending to be cleared. The total dues amount to crores of rupees,” AIOVA said in its complaint, copies of which were accessed by the Economic Times. “…if Club Factory is allowed to withdraw money from this escrow account, small sellers and their families will be put to irreparable loss.” The sellers’ association is yet to decide on a future course of legal action.

Inc42’s mails to Club Factory went unanswered by the time of publication.

This is not the first time Club Factory has come under the scanner. In December last year, the ecommerce store — founded in 2014 by Chinese company Jiayun Data Technology and headquartered in Hangzhou, Zhejiang, China — was accused by a customer of selling counterfeit products. The customer alleged that the company had advertised heavy discounts on popular brands but shipped fake products to the customers.

Club Factory has also been accused of misusing the provision that allowed duty-free imports of gifts and samples if they were priced below INR 5,000. Club Factory, along with other Chinese ecommerce platforms such as Shein, would label their orders as gifts, avoiding any custom duties on it. To avoid any more exploitation of the provision, the Central Board of Indirect Taxes and Customs (CBIC), in November 2019, decided to remove it.

If you are a seller and haven’t received your payment from Club Factory, please fill this form to help us highlight your concerns.

If you are feeling suicidal or have suicidal thoughts, help is at hand, please call 91-9152987821 or visit icallhelpline.org