The app-makers claim that the application doesn’t send the users data to any server, but stores it in the app itself. SelfScan, which has been developed by the state’s information technology department, is presently not available on the Google Play Store, but on the Amazon App Store and the Samsung Galaxy Store. However, all Android device users can download the APK to install the app from the official site.

During the launch of the app, Mamata Banerjee claimed that the swift development of the app reflects patriotism.

“I would always want to use an app prepared in my country. It reflects patriotism. What Bengal thinks today, the whole world thinks tomorrow,” Banerjee said

According to the department’s press release, published by Express Computers, the app doesn’t share any user data with a third party, but instead, all user data is stored in the app itself. “Absolutely free from spyware! No Cookies! No prying into personal data! No spoofing! No phishing! No third-party interference!” the press release says. Speaking on the launch of the app, Mamata Banerjee also alluded to the app’s data privacy policy. “This is like your sweet home where no intruder will be able to poke his nose (into it) and snatch away your privacy,” she said. 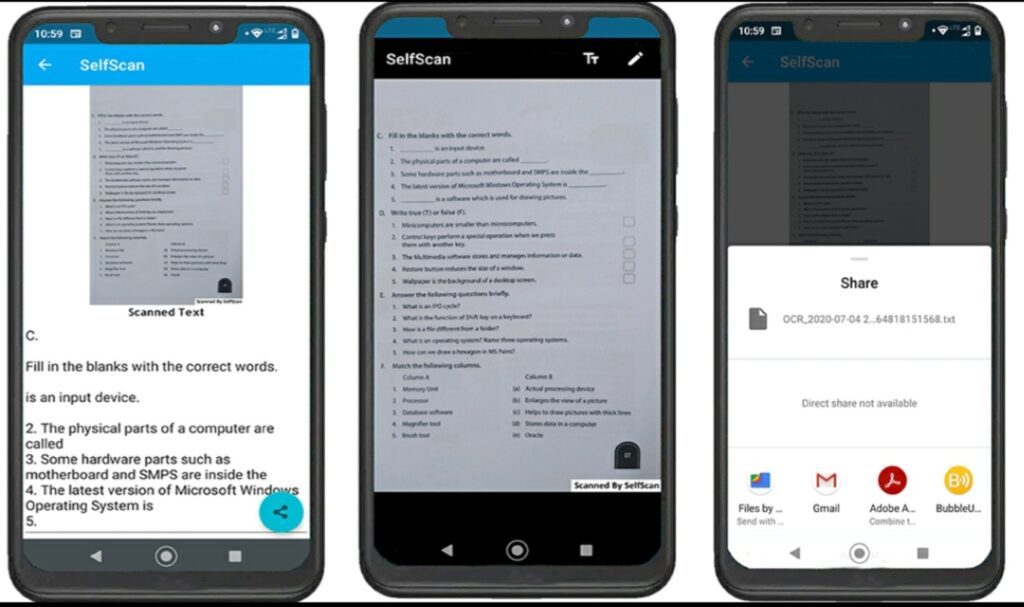 As with CamScanner, AdobeScan and other image-scanning apps, SelfScan also offers auto-crop and auto-edge detection features. Optical character recognition (OCR) facility, through which handwritten text can be scanned as machine-encoded text, is available for English, and soon to be launched for Bengali and Hindi. Popular image-scanning app CamScanner, now banned in India, used to offer the OCR feature as a plugin.

The design policy for the app maintains that no user data is sent to the server even for OCR. As mentioned on the application’s official website, this could pose challenges for the accuracy of the OCR scan for a text. The website says that the makers will continue to work on improving the feature.

According to the description, the app is completely free and comes without adds. The user won’t even need to register in order to use this app.

Among the other prominent features, the press release mentions that the app will soon have password-protection for documents containing sensitive information.

Currently, the app is available in English but the developers claim that they are working on Bengali, Hindi and other regional languages as well.

While the beta version of the app can be downloaded from the Amazon App Store, this author couldn’t manage to do so on his Android phone, since the app’s downloading and installing processes kept repeating.