The reach of the new commerce business of the pharma segment expanded to 1,900 cities in Q4 from 1,200 cities in the previous quarter

At a time when Reliance Retail is bolstering its online presence, the new commerce division of its pharma segment is also picking up pace gradually. In the January-March quarter, the pharma segment’s new commerce operations scaled up to 1,900 cities from 1,200 cities in the previous quarter, while its merchant base grew two times on a quarter-on-quarter (QoQ) basis.

“Our store productivity and online orders have really doubled during this period, which is led by better offers, a wider range and also deliveries. One of the main reasons has also been our focus on integrating with the hyperlocal capability. So, 30% of our orders are now being delivered through our stores across 8,000 PIN codes,” Gaurav Jain, head of strategy and business development at Reliance Retail, told Inc42.

Jain said the pharma segment’s catalogue grew 40% year-on-year (YoY) during the quarter. Besides the prescription drugs which it offers, the company is also planning to add OTC, beauty, Ayush and homoeopathic products. 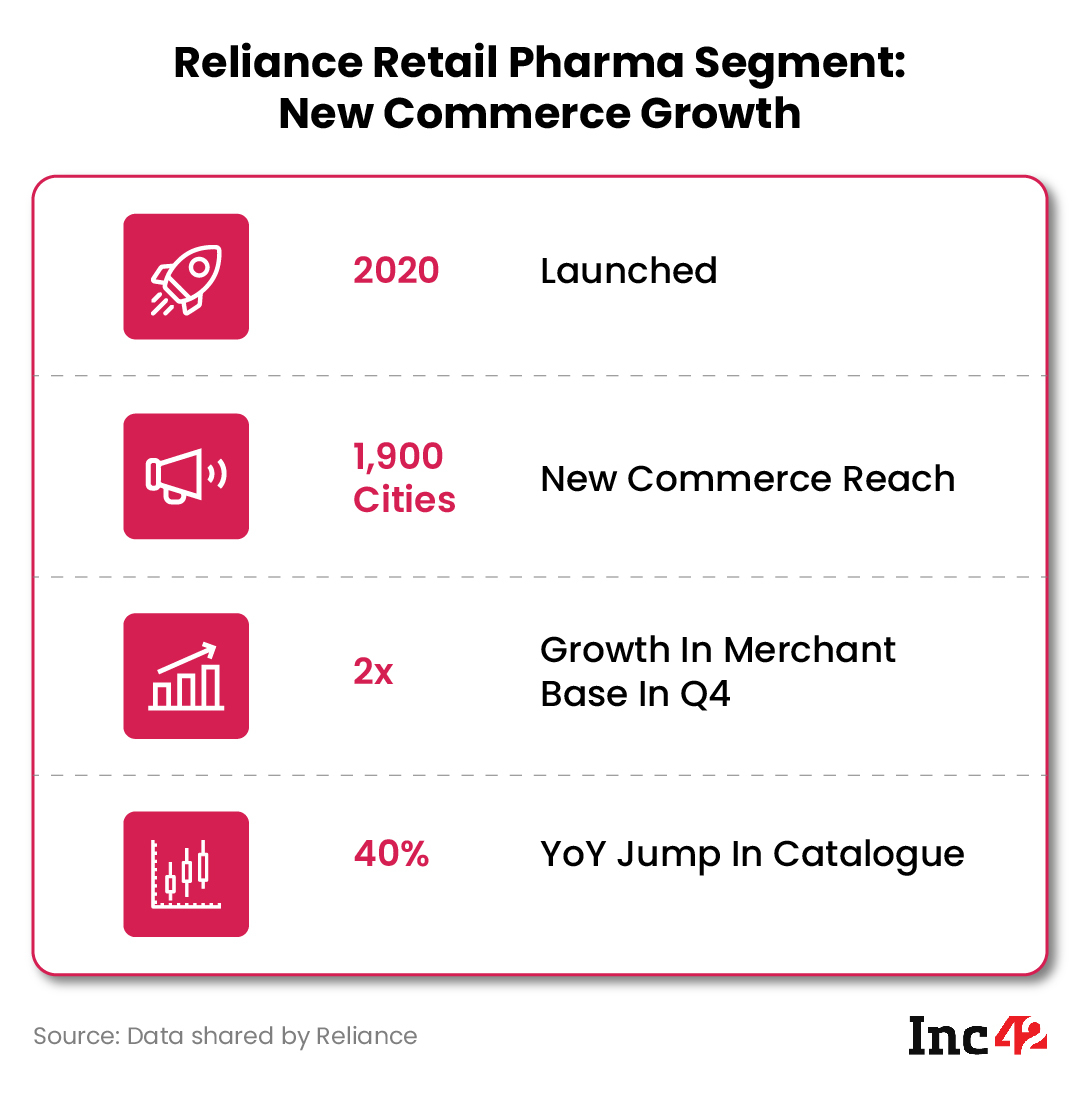 Meanwhile, the kirana merchants on the new commerce platform of Reliance Retail, JioMart, registered a 4x growth YoY during the quarter. Reliance Retail posted a 28.7% YoY increase in its net profit to INR 7,055 Cr in FY22, while gross revenue grew 26.7% to almost INR 2 Lakh Crore. Its customer base grew to 193 Mn through its portfolio of stores and digital commerce platforms in FY22.

“While our merchant base is up 4x year-on-year, older merchants have been buying significantly more. Also ordering more and ordering a wider set of product lines. We have been looking at adding more specific, region-specific assortment, also augmenting our supply chain capabilities to ensure that our delivery times are shorter and more dependable,” Jain said.

To provide new revenue opportunities to the kirana merchants, Reliance Retail has installed TV screens in the kirana stores. With these screens, kiranas are offering promotional and advertising space on these screens for local and national brands.

It is also tying up with credit and payment partners to offer credit without collaterals to the smallest of kiranas for their capital requirements, Reliance Retail said.

In addition, Reliance Retail has also set up merchandising teams close to the semi-urban and rural markets in order to offer the relevant local assortment. The retail arm of Reliance Industries Ltd (RIL) is also focussing on adding relevant region-specific assortment in order to cater to the local demand and tastes.

RIL is reportedly gearing up for the initial public offering (IPO) of Reliance Retail and Jio. The company is looking at listing on Indian stock exchanges as well as global exchanges. An announcement regarding this is likely to be made during the company’s much-awaited annual general meeting later this year.