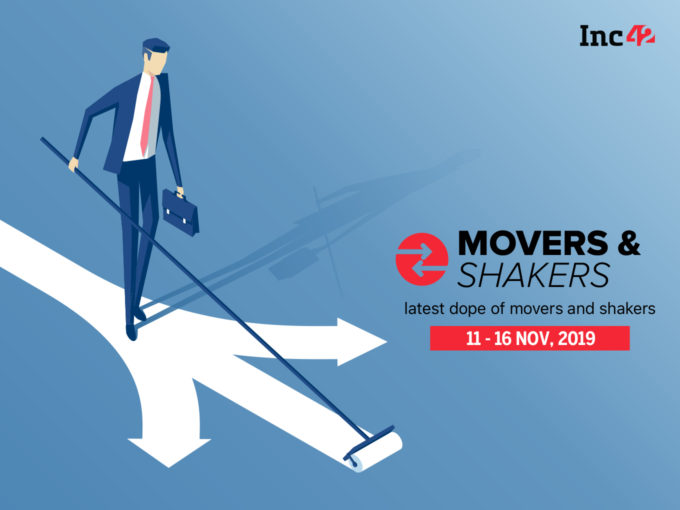 While India’s unemployment rate is witnessing new lows, a report from industry body National Association of Software and Services Companies (Nasscom) believes that startups have the potential to get the country out of this job-crisis. According to the report titled “India’s Tech Startup Ecosystem”, country’s startup ecosystem has the potential to create up to 12.5 Lakh direct jobs by 2025, as compared to the 3.9-4.3 lakh direct jobs in 2019.

Important Movers And Shakers Of The Week

Before joining Quora, Singh was previously the vice president and managing director of Yahoo India. Singh, a business administration graduate from the Faculty of Management Studies (FMS) at the University of Delhi, will report to Arnie Gullov-Singh, chief revenue officer of Quora.

OYO Hotels and Homes has appointed Harshit Vyas, as the chief business officer of its Indian operations. Since the launch of OYO in 2013, Harshit has been working closely with its founder Ritesh Aggarwal. He was among the OYO’s first five core employees focusing on business development for OYO’s first city launch in Gurgaon.

Prior to his elevation as the chief business officer – India, he was tasked with the role of head of the West region in the country, leading a team of over 2000 employees. In his new role, Harshit will report into Aditya Ghosh, CEO of OYO, Hotels and Homes, India and South Asia and will be responsible to drive execution of all business metrics including supply, demand, and operations. He will have field teams across India reporting to him and will work closely with the central capability functions.

Satheesh will help LetsVenture to enable companies to create a balanced approach to ESOP liquidity and drive meaningful discussions between founders, HR heads, and board members for the process. He has served the position of leading the HR team at Flipkart and was the general manager, people excellence at Xto10X.

Ola Electric Mobility Pvt Ltd (Ola Electric) has announced the appointment of BVR Subbu as a member of its Board of Directors. Subbu brings with him the experience of over four decades in the automobiles industry. He currently manages a boutique strategy-consulting firm, Beyond Visual Range, advising global PE funds and serves as a member of the boards of various automotive and technology companies.

Beginning his career with the Tata Administrative Service, he was seconded to Tata Motors, where he held multiple leadership responsibilities across the vehicles and spares marketing/sales, service and sales finance functions. He has also worked with Hyundai Motors India. Subbu is an alumnus of Jawahar Lal Nehru University (JNU), Delhi.

Food-specific product review platorm, Mishry, has appointed UK based entrepreneur, advisor, and mentor, Jonathan Callcut as a new advisor on board. In his new role, Callcut will help the startup in its reviews and recommendations space.

In past, Johnathan has been the CEO at Reevoo, an independent review aggregator that generates and delivers content based on consumer opinion across 60 countries and 30 different languages. He is also the chairman and cofounder of Felix, an AI-driven content engagement solution that helps brands and publishers retain their traffic.