The event was supported by ekincare and Kaizzen and our annual partners — Times Internet, AWS, Paytm, HSBC and NetApp Excellerator 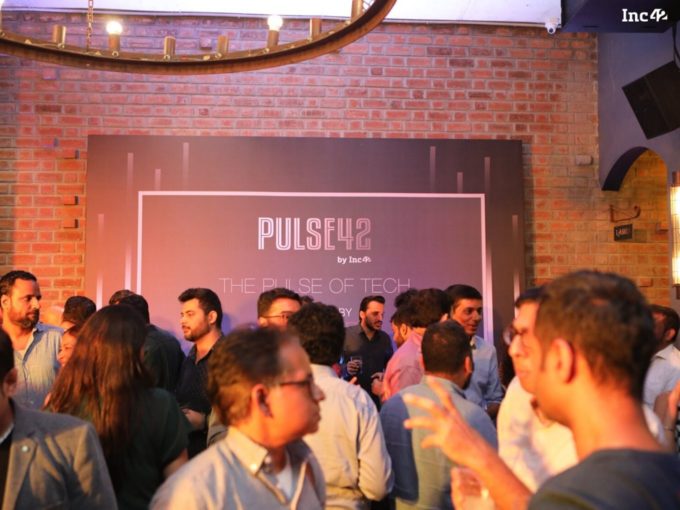 Manan Khurma, founder and CEO, Cuemath was clearly enthralled at the Pulse42 tech party, our signature party for the Indian startup ecosystem.

Bengaluru has since long dominated the startup ecosystem in India. The city hosts some of the most innovative startups from the country and has the best resources and support infrastructure for startups in India. There’s a reason Bengaluru is known as the startup capital of India. DataLabs by Inc42’s Annual Indian Tech Startup Funding Report 2019 revealed that Bengaluru startups secured $5.3 Bn across 267 deals in 2019, the highest among any other city in the country.

And to coronate the king, Inc42 threw a grand Pulse42 party in Bengaluru, our first party in the city in 2020.

More than 100 stalwarts from Bengaluru’s startup ecosystem came together to enjoy a night of networking with no agenda. These included names of some of the most prominent startups and investors from the ecosystem. Among the people who attended the event were Sujeet Kumar, cofounder, Udaan, Rahul Gulati, program manager, Microsoft For Startups, Anand Datta, vice president, Nexus Venture Partners, Srikant Iyer, cofounder, Homelane, Siddhanth Muthukali, associate, Kalaari Capital, Shailesh Lakhani, managing director, Sequoia Capital and more.

Hosted on January 23, 2020, at The Bier Library in Bengaluru, Pulse42 was all about networking and the catch-up sessions went on till late night. Unlike usual tech conventions, Pulse42 was without any set agenda, no panel discussions or speaker sessions, just old-fashioned shoulder-rubbing and networking over food, good music and cocktails.

While Pulse42 is a fun-filled evening with no pressure of deadlines or pressure of creating an impression, it has witnessed plenty of partnerships take form in the past. And who knows which ideas struck a chord with someone who matters at our most recent party.

Moeko Suzuki, founder, Startup Lady exclaimed, “Everybody is so friendly, to begin with, and I actually met a lot of interesting people, investors and entrepreneurs. This is actually my first time coming to Bangalore, and I interacted with some very interesting startups who are very motivated to accelerate their businesses. I think this was quite great and thanks to Inc42.”

After the successful completion of the event in Bengaluru, all eyes are now on Mumbai as Pulse42 is heading towards the financial capital of the country on February 27.

The event was supported by ekincare and Kaizzen and our annual partners—Times Internet, AWS, Paytm, HSBC and NetApp Excellerator