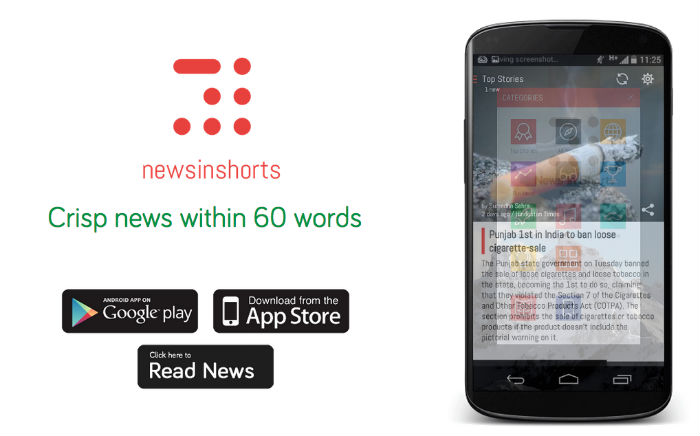 News in shorts aims at serving the people by keeping them updated with the latest happenings around the world in just sixty words. It saves the time and also keeps the reader hooked on for more news. Usually, people open up news apps and go through the main headlines. It is highly unlikely for a major proportion of the readers to finish reading a full article. This was the concept behind the startup which explains the whole issue in just sixty words. The main feature which makes it stand among the rest is the fact that it is very specific in terms of news delivery and everything published is kept short and simple.

“Mobile content is ripe for disruption. We believe they (News In Shorts) can revolutionize the way content is being consumed on mobile devices. The 60-word news ‘shorts’ is just a step towards that goal,” said Lee Fixel of Tiger Global.

Azhar Iqubal, Deepit Purkayastha and Anunay Arunav, three IIT dropout started News In Shorts as a Facebook page in April 2013. The startup was part of fourth batch of Times Internet’s startup accelerator TLabs, and had raised INR 10 Lakh against 10% equity. News In Shorts had also raised an undisclosed amount in funding from Times Internet, Flipkart co-founders Sachin and Binny Bansal; Gaurav Bhatnagar, Ankush Nijhawan and Manish Dhingra in a seed round in 2014.

With the new funding, the startup plans to build a larger team (it plans to increase its team from 16 to 60), ramp up technology, move into audio and video streaming and add a layer of personalization to its content, in the next 3 months.

Very recently, News In Shorts had crossed 1 lakh download mark on play store. Its page views have grown from 3 mn Sep, to 19 mn in Dec; almost, doubling every month.

Related: Reminiscing 2014: 15 Startups Which Made It Big Last Year

As per the company, it publishes about 60 articles per day and plans to increase that to about 300 in the next three months.

Currently, the app has no plans for monetisation, after 2 years it will look at sponsored content and native advertising.