NewsHunt Gets INR 120 Cr. In Series C From Falcon, Matrix, Sequoia & Others

NewsHunt Gets INR 120 Cr. In Series C From Falcon, Matrix, Sequoia & Others 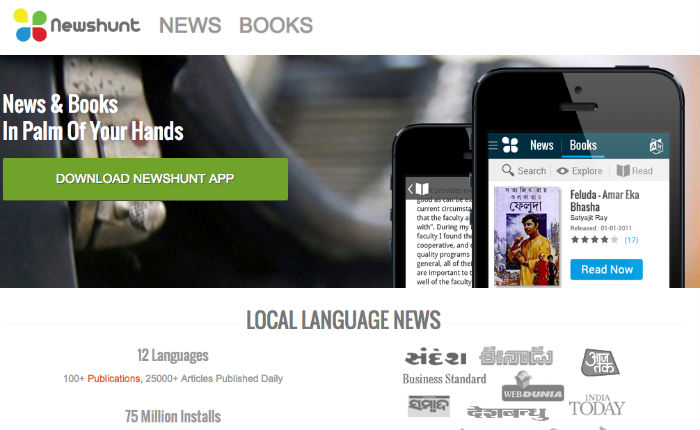 ​NewsHunt (earlier called Eterno Infotech) was launched in 2009 by former Nokia employees Umesh Kulkarni and Chandrashekhar Sohoni and was later acquired by Ver Se in 2012. It was started as an application for feature phones, and later expanded to smartphones NewsHunt app. The app has over 75 Mn downloads by now, with its availability in 12 Languages, has over 100+ Publications, with 25000+ articles published daily.

As per the company, over 10 Mn local language eBooks have been downloaded till date by over 2 Mn users, 40% of which are paid users. The payments are done through Newshunt’s proprietary payment platform iPayy that is now also being used by third party developers for micro-transactions through carrier billing.  4 million unique customers have used the iPayy platform for payments, said the company.

Newshunt plans to add more categories besides audio and video on the platform.

“The next 500 million mobile Internet users that will emerge in India will largely be local language first — they will create and consume content and services in local languages. Our vision is to be a dominant part of their first Internet experience and serve these users with world-class products starting with Newshunt, eBooks, iPayy and many more to come,” said Viru Gupta, founder and CEO of Newshunt.