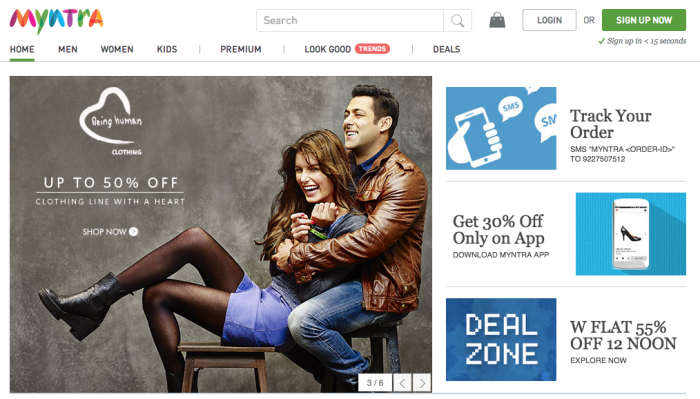 At one place where India is set to become world’s fastest growing ecommerce market and capitalization of internet businesses hitting $160 Bn, Myntra steps out boldly to shut its website by the year end.

The decision comes from the facts that the company draws 80% of its traffic and 60% of sales from its mobile application. It expects to take that number to 90% by the year end, which is when the e-tailer’s web portal may cease to exist.

The ecommerce business is expected to grow from $2.9 Bn to $100 Bn in 2020. The two ecommerce market places Flipkart and Myntra have collectively crossed the billion dollar mark. Flipkart and Myntra are expected to close at $1 Bn in sales for the current financial year. Myntra independently is on course to clock Rs 2,000 Cr in sales or gross merchandise value (GMV) at a current monthly run rate of Rs 300 Cr.

Myntra believes that with an exponential growth of mobile internet in the country the company will be able to establish itself as mobile-only player morphing from mainstream online retailer. Myntra also plans to build its own brands in partnerships with celebrities, sell its private labels on other portals besides hunting for acquisitions in the fashion space.

Mukesh Bansal, CMO and co-founder at Flipkart in his explanation to TOI said, “Mobile as medium has grown rapidly for all e-commerce players but more so for the fashion e-tailers. Shopping for fashion is largely impulse-driven and that’s why the vertical has done so well on the mobile. We are 100% focused on mobile and making all our investments on the platform going forward.”

Whereas Tarun Davda, director at Mumbai-based early-stage venture fund Matrix Partners said that several leading Indian e-commerce players have seen mobile contribute to greater than 50% of transactions today from under 5% a year ago. In the social-commerce space LimeRoad, for instance gets 70% of its users on mobile and more importantly, these users are three times more engaged and likely to buy as compared to desktop users.

A recent report from Morgan Stanley reports fashion, which includes accessories and footwear, is the second largest category online, after electronics, in the $3 Bn e-commerce sector in India, accounting for almost 30% of GMV. Its two biggest rivals, Amazon and Snapdeal are guzzling millions in cash to discount products even as they scale up their GMVs whereas Flipkart is expected to be near $20-30 Mn on discounting, marketing to account for larger market share.

Myntra At Glance In Past Few Months

May 2014: Myntra was acquired by Flipkart in a bid to expand its presence in fashion and lifestyle segment.

May 2014: Myntra launched a new mobile shopping app for Android users to make browsing convenient as shoppers can maneuver through the 60,000+ products with ease.

Sep 2014: Myntra launched “Designer In Residence” Program Under Its Fashion Incubator to mentor young entrepreneurs who do not have access to capital, supply chain and distribution platforms.