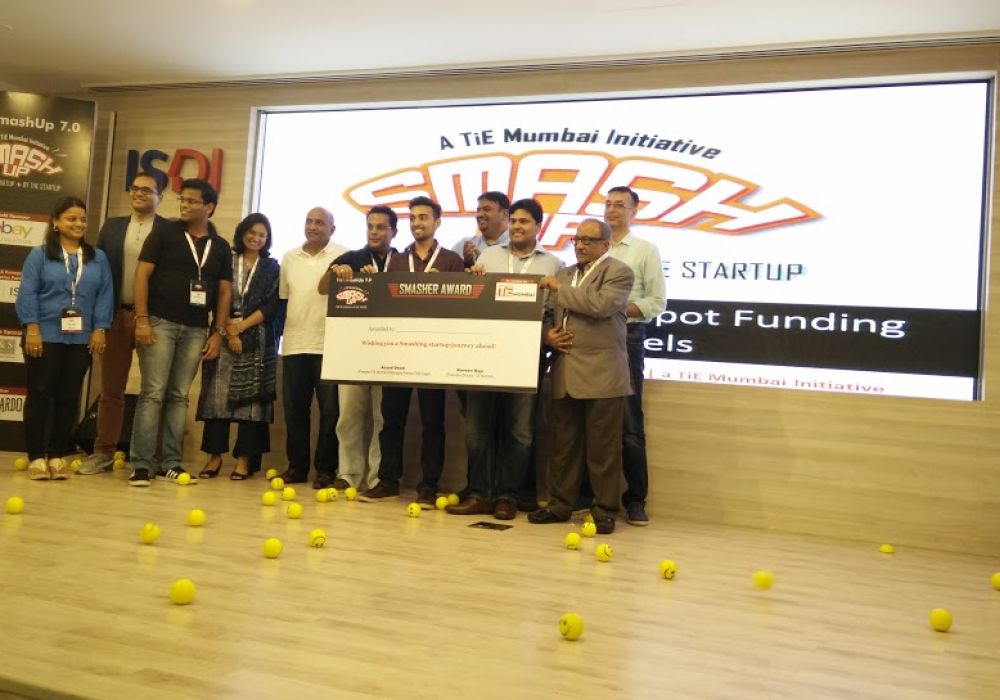 TiE Mumbai conducted its annual flagship event called TiE Mumbai Smashup 7.0 yesterday. The main highlight of the day-long conference was Smasher Award 2.0 – a spot funding competition wherein six shortlisted startups pitched for a grand prize of $38.7K (INR 25 Lakhs) per startup. This year, the Smasher Award 2.0 was bagged by just-launched startup IPHawk. IPHawk has been funded by the likes of Sanjay Mehta, Dewang Narella of the TiE Angels Mumbai charter.

However, the highlight of the day-long conference was the Smasher 2.0 Award. A total of 55 startups were selected three months before the event and six were shortlisted for the Spot funding pitch. ‘Spot Funding by TiE Angels’ is a platform created for TiE Charter Members to provide first investment to early-stage startups. Each startup was provided 15 mins with the investors, divided for pitching, Q&A and discussing the details of the funding. The maximum ticket size of investment was $38.7K per startup.

Winner IPHawk is a SaaS startup aimed at monitoring, detecting and responding trademark infringement of companies and brands. Its

AI algorithm aims to be a legal first-responder for those clients with an infringed trademark. The pricing plans for the startup’s services begin at $100/year.

This year the area of focus for were – healthtech, foodtech, media and entertainment and fintech. The winner of the event was Mumbai-based IPHawk.

Here are the details of the other shortlisted startups:

Shepherd For Men: It is an O2O platform for men’s grooming products.

Shepherd for Men was launched a year back and manufactures 13 SKUs across shampoos, conditioners, shaving creams and more. It boasts of an eight-member team.

FinPeace: Fintech startup FinPeace is an online insurance claims adjustment service provider. It deals primarily in the B2B domain and is

a subscription-based platform for users who want their family to be secure across different asset classes such as mutual funds, insurance claims etc. It was founded by Sushant and Ajay Saraogi in April 2016. It is a Government-recognised startup.

Genecorp.in: It is a digital personal genomics app founded by Anand Prasad and Amit Anand in January 2017. It has been formally recognised as a

“Startup” by the Government of India. Genecorp aims to provide a three-step DNA testing kit for users to test for cancers, genetic disorders, lifestyle diseases and more. The app provides a detailed report and plan of action for at-risk concerned users. It has a 10 member team based out of Mumbai.

night chauffeur service for party goers with a call-centre service, for the same. It has been in business since 2007 and claims to have served 35,000 customers so far. PHD has tied up with luxury car manufacturers such as BMW, Rolls Royce etc and wants to build a mobile app for the same.

CNote: CNote is a Mumbai-based smart catalogue with integrated

notepad and email. It claims to simplify and digitally onboard inventory for the pharma and education sectors among others during exhibitions. CNote was incorporated last year and managed to raise an undisclosed amount of funding from Hyderabad Angels last year.

Besides, the Smasher Award, TiE Mumbai Smashup 7.0  also showcased the pitfalls and pinnacles of startup entrepreneurship by having intimate discussions with TinyOwl’s co-founder Saurabh Goyal, CEO and founder Aseem Khare of Taskbob, Anubhav Goel, co-founder and CEO of Zimmber in “Startup Tales: Starting The Second Innings.”

Here, Saurabh and Aseem spoke about rejoining corporate life after their startup stints got over.  Newer companies such as Wittyfeed, Chumbak and Doollaly had a session on “Breaking the Barrier.” The main takeaways from these sessions included learnings around hiring, understanding and leveraging product-market fit as well as expanding in other cities too soon. Wittyfeed CEO and co-founder Vinay Singhal spoke about building up a globally-known, bootstrapped company from a Tier II city in India and how investors were sceptical when they went to fundraise for expansion.

TiE Mumbai SmashUp has been conducted for seven years running. Last year, Hubilo and Intricate Fashions won the popular startup award and jury award, respectively. The 2015 edition of TiE Mumbai Smashup was hosted by VC Karthic and Lavin Mirchandani. TiE Mumbai Smashup aims to create an atmosphere where ideas mature into action plans and look to be inspired by stories of success as well as not so successful strategies. The TiE Mumbai chapter has recently forayed into angel funding, with a ticket size of INR 20 Lakhs-INR 25 Lakhs. Commenting on the immense potential of a collaboration between startups and TiE Angels, President Anand Desai aptly said, “ We have met around 50 startups till date through the TiE Mumbai platform, with a few in advanced discussions. The TiE Angels programme and Spot funding pitch will help us boost this further.”

An earlier version of this article had mentioned IPHawk’s valuation, on request from the founder, we have removed it.