The Mumbai chapter of The Indus Entrepreneurs (TiE) TiE Mumbai concluded the Smasher Awards on Saturday (August 20). Six curated startups got the opportunity to pitch to get audience votes as well as jury votes at the finale of SmashUp 6.0.

Intricate Fashions – a WhatsApp-like sourcing platform for ethnic clothes won the jury award while Hubilo which promises to be a one-stop solution for any event management won the popular startup award.

The startups were scored on the basis of concept, traction, and scalability factor.

Other startups which pitched at the event included in5minutes – a content creation company offering five minute educational videos on university and other courses, Pharmerz – an online B2B marketplace for pharmaceutical industries, SpiderG – an e-invoicing platform to do easy bookkeeping for freelancers and startups, and QuickSell – an app which allows small merchants to sell easily from their mobiles. 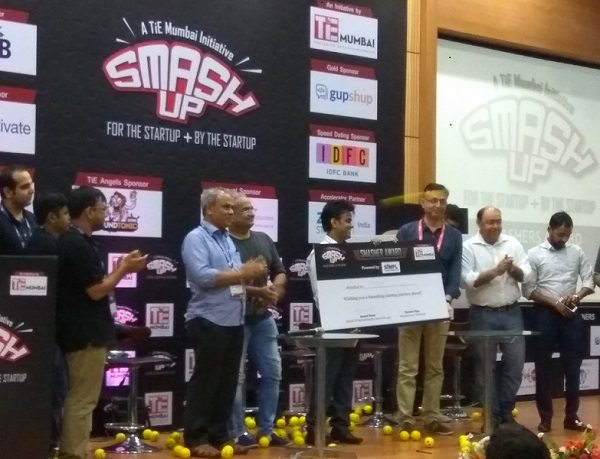 Additionally, with a new global logo and a new Mumbai Board, the TiE Mumbai team also announced several new initiatives including:

TiE Mumbai 100: A unique initiative where the TiE Mumbai will scan the ecosystem and hand pick 100 entrepreneurs each year to be supported and mentored. Each selected company will benefit from eminent mentors and facilitation for funding.

TiE FinTech Special Interest Group: Under this initiative, TiE Mumbai will bring developers and users of the FinTech ecosystem together. This ecosystem will be combined with the reach and experience of the Charter Members network under a sister city chapter initiative. Entrepreneurs who are developing FinTech solutions in India often encounter premature regulations or are ahead of their time. They will get a chance to work with developed markets such as TiE New York, TiE London, TiE Singapore and TiE Silicon Valley.

Given that Mumbai is the epicentre of media, entertainment and Bollywood, a similar initiative is being undertaken by the TiE Mumbai Media & Entertainment special interest group with Los Angeles’ Hollywood.