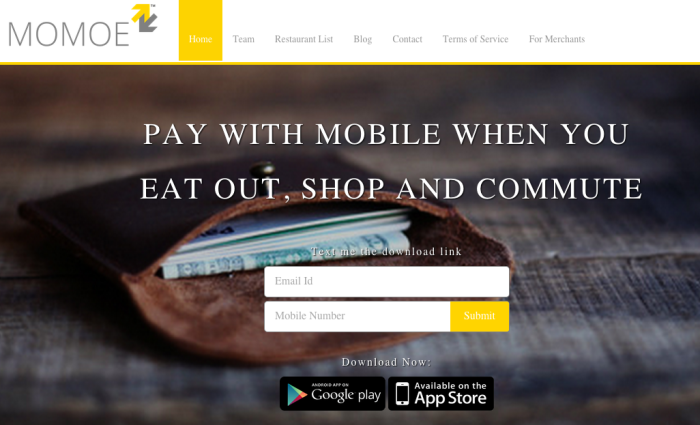 In what is touted to be the largest round of seed funding, mobile payment startup Momoe has raised $1.2 Mn (INR 7.4 crore) from investors led by IDG Ventures India and Jungle Ventures, with participation from India Quotient.

The funds raised will be used to expand the team as Momoe plans to reach 500 merchant outlets in the next few months.

Established in April 2014, Momoe is the developer of an app that enables people to make payments using their mobile phones when they eat out, shop or commute. Unlike Paytm and Mobikwik, which facilitate cashless payments with a virtual wallet solution that stores a fixed amount of cash, Momoe’s app works by using credit-card details. The Momoe app enables users to pay with their smartphones at restaurants across urban areas of Bangalore. With the Momoe app, users can see live tab, split bills and pay on the phone without having to wait for the bill to arrive at the table.

While the facility offered by Paytm and MobiKwik does away with the two-factor authentication to make payments, Momoe eliminates the need for a wallet. Momoe gets a cut from merchants for each transaction, similar to the rate charged for existing mobile point-of-sale terminals.

While expecting the company to handle INR 3,000 Cr worth of transactions in the next 18 months, Utkarsh Biradar,CEO Momoe technologies said, “We are the early movers in the space.”

Utkarsh founded the startup along with Karthik Vaidyanathan, Ganesh Balakrishnan, Neelesh Bam and Aiman Ashraf. He is an alumnus of Bombay University and has completed his masters in Industrial Design from the prestigious Indian Institute of Bombay.

Global ecommerce firms have also been showing keen interest in Indian startups. Recently, Alibaba, China’s largest ecommerce company picked up 25 per cent stake in Paytm, in a move to tap the mobile payments business in India.

Related: 2014 In Review: The Top Indian Mobile Apps To Watch In 2015 That Launched This Year