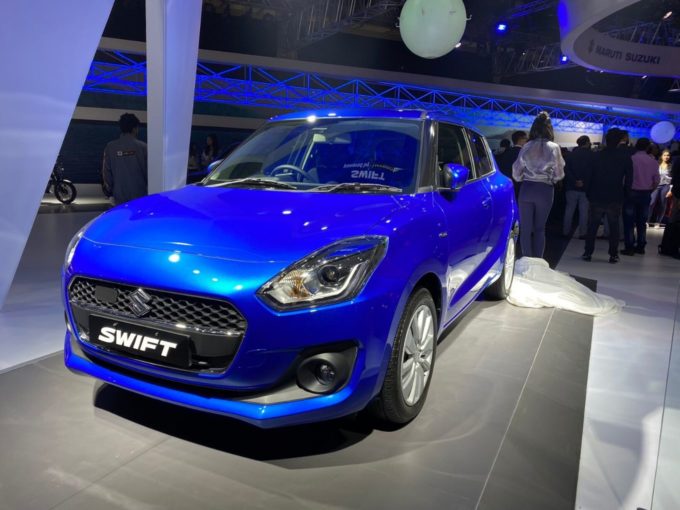 The Maruti Suzuki Swift Hybrid is powered by a 48V lithium-ion battery packs, along with integrated starter-generator. It is the first-of-its-kind hybrid version of an ICE engine and battery-powered car made for Indian consumers by the company. The hybrid car was first showcased at the 2018 Indonesia Motor Show.

Though the price of the vehicle has not yet been announced. It is expected to be comparatively lower than full EVs in the market. The mild-hybrid vehicle is expected to hit the road by April this year.

In terms of power, the hybrid vehicle comes with 1.4-litre booster jet petrol motor, plus the 5-speed AMT gearbox. The company claims that the latest version of Swift Hybrid not only offers high performance, but is also built for increasing efficiency and reduce fuel consumption, significantly. It claims to offer 32 km per litre of fuel economy.

The Auto Expo, which debuted in 1986 at Pragati Maidan, New Delhi, has evolved into one of the world’s most premier auto shows.

This year, the focus is on electric mobility. Ahead of Auto Expo 2020, Rajesh Singh, founder and CEO of eChargeBays, told Inc42 that all eyes will be on electric and hybrid vehicles this year. The previous year, there were only 10 electric mobility companies, and a year before that there were two-three vehicles.  “The market is growing, this year apart from Maruti Suzuki, Tata and Mahindra will also be launching its brand new electric vehicles,” he added.

Besides Maruti, Mahindra showcased its first compact electric SUV, the  Mahindra eKUV 100 at the expo. The electric vehicle is priced at INR 8.25 Lakh and is expected to be launched this year.

The Mahindra eKUV 100 comes with a 15.9 kWh lithium-battery and is expected to offer a range of 120 km on a single charge. The all-new eKUV 100 looks similar to that to its petrol variant.

Mahindra is also working on a long-range electric motor which could go up to 350 km on a full charge. In addition to this, the company had also announced EV 2.0 platform for the next generation of electric vehicles to be launched by Mahindra in March 2020.