The aim? Ibibo wanted to expand its reach within the Indian hospitality sector, and focus on additional technology innovations. 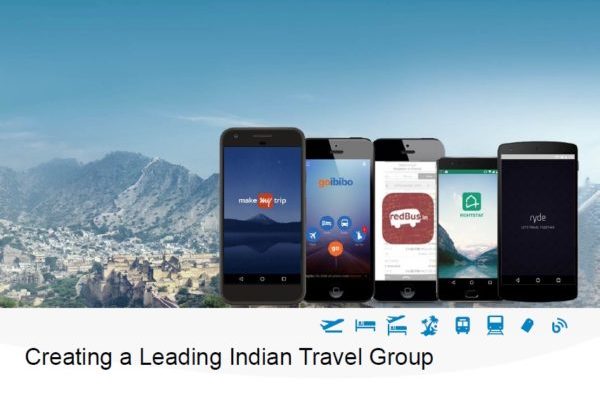 In the announcement conference call, MMYT’s founder Deep Kalra stated, “We believe this consolidation will unlock value for all shareholders as the new entity will see benefits of an increased operating scale, accelerate travel technology innovations, and offer customers a wider product offering – including air-ticketing, hotel bookings, bus ticketing via the redBus brand, holiday packages and the ability to drive cost efficiencies.”

With this transaction, our focus going forward is to continue accelerating the pace of travel bookings growth from off to online, since online travel penetration remains fairly low at around 15% for the accommodations industry and 18% for the organized bus industry in India,” he added.

The two traveltech giants – who less than a year ago were preparing for a showdown by fuelling up on investor money – suddenly realised that probably the battle for supremacy comes at too much cost, too much cash burn, and too many bitter discounts and promotion wars.

“Companies that solely focus on competition will die. Those that focus on value creation will thrive.”

MMYT and Ibibo seemed to have understood this adage well by now. Rather than fight a tooth and nail battle for number one, it made more sense to join forces to create a more scalable business – a mega entity that will control a fifth of the lucrative airline booking market and also have significant shares in the bus and hotel bookings, and ride-sharing spaces.

Not to mention, it will give rivals Cleartrip.com, Yatra, Booking.com, Expedia, and hotel aggregators such as Softbank-backed OYO a hell of a tough time.

And if the 34.1 Mn transactions processed together by the merged entities’ brands in FY2016 is not an indication of how big this deal is; sample this – in one strategic move, this deal has brought together two giants — Naspers and Ctrip and a whole lot of funding fuel for a more profitable business in the future.

The deal is expected to get closed before the end of December 2016, for an estimated value of $720 Mn. Also, according to a Morgan Stanley note, the combined entity will be valued at $1.8 Bn.

With the acquisition being the talk of the town, let’s rewind to the beginning of the story and see how far the two players have come.

Launched in 2000 by Keyur Joshi, Rajesh Magow, and Deep Kalra, MakeMyTrip is backed by investors such as Helion Venture Partners, Tiger Global Management Fund, Sierra Ventures, and SAIF Partners. At present, the portal claims to have 27.5 Mn app downloads, with 43% of domestic flight and 74% of domestic online hotel orders being mobile.

Earlier this year, MakeMyTrip partnered with BookMyForex to allow international travellers to purchase the required foreign exchange from the website or mobile app. It also forayed into the budget accommodation space some time back. A few of the companies that it has acquired include MyGola, HolidayIQ, and Bona Vita Technologies.

Goibibo, the premier product of the Ibibo Group, on the other hand, was launched in 2007 by Ashish Kashyap. In fiscal 2016, it reported 24 Mn app downloads with 23.7 Mn total transactions. Recently, it was ranked No.1 for hotel booking in a report by Morgan Stanley. Also, in September 2015, goibibo launched GoStays, a budget accommodation marketplace in 72 cities, translated to 10,000 rooms a day.

Here are some more stats for the brand: 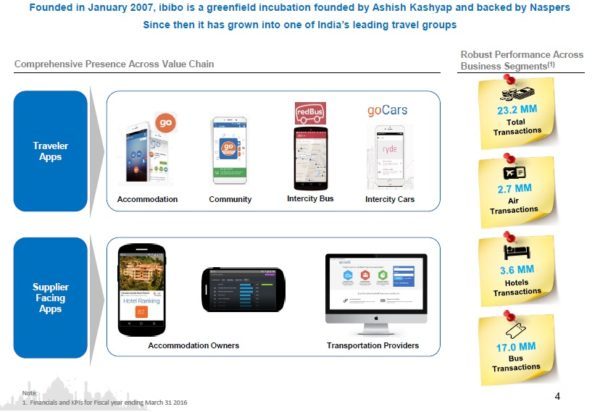 As of now, the combined entity will leverage: 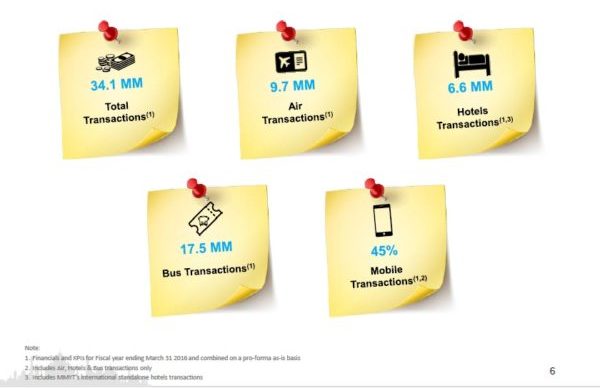 As Deep believes, the focus going forward is to continue accelerating the pace of travel bookings growth from offline to online, since online travel penetration remains fairly low at around 15% for the accommodations industry and 18% for the organised bus industry in India.

Also, the combined entity will have an opportunity to leverage an even deeper base of talent that will help drive the future of travel in India.

As mentioned by Rajesh Magow, co-founder and CEO-India of MakeMyTrip, “Standalone hotels is a key segment that we’d like to continue to invest in, in order to drive high growth and accelerate the offline to online shift that is already happening in India today.”

“By leveraging Ibibo’s innovative customer-facing and supplier-facing apps and the talented team, we have an opportunity now to further penetrate the large travel market in India by teaming up with MMYT to drive even higher growth in the organised and alternative accommodations market.”

Today, I believe we are at a pivotal point in the evolution of travel in India, as mobile penetration continues to rise at a rapid rate, coupled with the strong momentum we’re seeing in bookings growth in the accommodations industry as secondary and tertiary cities and towns are rapidly coming online. By combining our resources and talent, we are well-poised to push ahead and further accelerate growth for the business,” he added.

The Combined Entity: Effect Of A Maturing Market

The one thing that this deal clearly points out is a maturing online travel market in India where entities have started to focus more on creating value than squandering resources on cash burn and discounts. The Flipkart-Jabong deal earlier this year was one such example of maturity in the consumer Internet space and the MMYT-Ibibo deal – which is by far the largest deal in Indian online travel aggregation space – further exemplifies the trend.

Ajeet Khurana, former advisor at Kalaari Capital,  reiterated the sentiment. He said, “What has happened in the case of MakeMyTrip and Ibibo is very exciting. As erstwhile early-stage ventures reach a point of maturity, they should look for inorganic growth opportunities to maintain a steep growth curve. The combined strength of MakeMyTrip, goibibo, redBus, Ryde, and Rightstay is formidable. I hope to see other maturing Indian startups follow the example of the MMYT-Ibibo deal.”

The strategic advantages to the combined entity are many – category level dominance, reduced costs of operations due to back-end integration, enhanced scale of operations, better margins, increased bargaining power, and probably relatively lesser ad spending by the two rivals.

Though of course, Deep stated in the conference call yesterday that ad dollars will continue to be spent to strengthen all three brands – goibibo, MakeMyTrip, and redBus.

But they surely would not be the aggressive big-ticket advertising games which MMYT played with a star-studded television campaign led by actors Alia Bhatt and Ranveer Singh. And which Ibibo followed up with aggressive advertising for its travel-based social network, GoContact.

As per MMYT’s fiscal 2017 Q1 Earning release, marketing, and sales promotion expenses increased by 329.2% to $52.7 Mn in the quarter ended June 30, 2016 from $12.3 Mn in the quarter ended June 30, 2015 – primarily as a result of significant customer inducement/acquisition programmes expenses incurred along with an increase in mobile application download and referral cost and other brand advertisement expenses.

Deep himself has spoken about the many hidden synergies this transaction will unfold. He stated, “MakeMyTrip is strong in the air-ticketing and branded 5-4-3 star hotel-booking space, while goibibo is strong in the budget accommodation space. One of the strategies that could play out is: A lot of bus travellers that redBus has, would prefer accommodation offered by our recently launched brand Rightstay that includes villas, cottages, bungalows and apartments. You will see a lot of such interesting synergies unfolding going forward.”

And undeniably, there will be many. India’s online travel market is estimated to be about $10 Bn, whereas, the budget accommodation space has nearly 1 Lakh accommodations and a market size of 1 Mn rooms. By 2020, the online travel market is expected to touch $16.5Bn. With the combined entity having around 60% market share of the approximately 100,000 online daily hotel room nights sold in the country, this spells a huge shift in the balance of power.

Additionally, Naspers also has large stakes in fintech and ecommerce sectors. It owns a majority stake in online payment solution PayU Global which recently announced the acquisition of rival CitrusPay for $130 Mn. No wonder, obvious synergies exist between MMT and the payments business also for processing of transactions.

Thus, one less well-funded competitor means the combined entity has a better shot at stemming losses and the industry too has a better chance to evolve and grow further.

Interestingly, in July 2016, Yatra also announced plans to get listed on NASDAQ as a result of its merger with special purpose acquisition firm Terrapin 3 Acquisition Corp (TRTL).

With this move, all three major players – MMYT, Ibibo, and Yatra will become listed entities. But the big question is what does it spell for the industry on the whole?

“This consolidation is big news not just for the travel industry but for ecommerce as a whole. Two big players with no differentiation fighting it out for the top slot have finally merged. Which means the new entity is bound to focus on profitability and not cash discounts. This is good news for a differentiated startup like us where we are enabling reverse bidding of hotel room prices to provide better prices to customers directly from the hotel instead of cash discounts out of pocket as these guys were engaged in.”

There is no denying the fact that the acquisition, on the whole, is a defining step for the online travel industry in India. As Kalra stated, “We expect this to create an even more scalable business with the expertise to transform the booking experience for travellers.”

While the deal is expected to lead to market rationalisation on account of lesser discounting games  better margins, and overall efficiency in the travel space, but the dominance of these two will also leave other players struggling to figure out their next moves.

Anand Lunia, General Partner at India Quotient aptly summed this up when he said, “From a multipolar market, where all players were bleeding, it will now be more unipolar with the others far behind. RedBus is a unique asset, giving it a big advantage over other players. Focus in terms of expansion will be on alternative hotel business, Oyo-style. The question now is what will Yatra, Cleartrip and Oyo do… ”

What the other players will do is a question that will get answered in the future, but what is eminently clear from this move is that the online travel space in India is in for an interesting ride in the meanwhile.