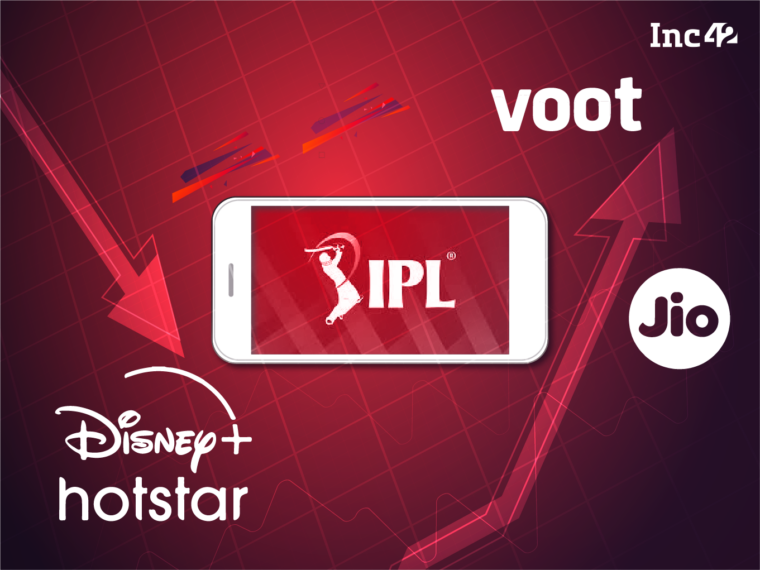 According to multiple analysts, Disney+Hotstar is set to lose out on anywhere between 15-25 Mn subscribers after losing out on IPL rights

Meanwhile, the IPL will be a huge opportunity for Reliance-owned Viacom18’s OTT platform Voot to expand its user base

The Board of Control for Cricket in India (BCCI) has wrapped up the auction of the TV and digital media rights for the Indian Premier League (IPL), one of the world’s most lucrative sports leagues. The figures that have been quoted are enough to solidify that claim as Disney Star won the rights to broadcast the IPL on TV in the Indian subcontinent, or Package A, for a whopping INR 23,575 Cr.

However, Disney Star lost to Reliance-owned Viacom18 for the right to broadcast IPL on digital platforms, ending its five-year monopoly on IPL media rights. Viacom18 won the digital rights for both exclusive and non-exclusive matches, Packages B and C, for a collective INR 23,758 Cr.

The auction was for the 2023-27 period, which means Viacom18 will have the digital rights for five years and Disney Star will have to make do with the TV rights. Viacom18 also emerged as the winner for international TV and digital rights, along with Times Internet.

Although the much-celebrated tournament saw a decline in the viewership this year, it still attracts tens of millions of viewers per match.

According to an October 2021 figure given by BCCI, IPL 2021’s viewership had crossed 380 Mn by around halfway through the season.

The BCCI is yet to report the figures for the latest IPL season. However, one thing is certain – IPL is a very lucrative sports league. Multiple media reports suggest that advertisers spent almost INR 17 Lakh for a mere 10-second ad spot during IPL 2022 matches.

At this rate, considering the total ad inventory of 2,300 seconds per match, a broadcaster stands to make INR 39 Cr from just advertisements.

This means that Disney Star, which paid a price of INR 57.5 Cr per match to acquire the TV rights, can make almost two-thirds of the money it spent from advertisement alone, subject to it getting the same advertising revenue as it got last year.

However, the loss of digital broadcasting rights has raised questions about the future of its OTT platform Disney+Hotstar.

Disney+Hotstar And IPL: A Match Made In Heaven?

To put the value of IPL’s broadcasting rights into perspective, Star India (which was rebranded as Disney Star after Walt Disney acquired 20th Century Fox in 2018) had won the TV and digital rights for the IPL for a five-year period during the 2017 auction for just INR 16,348 Cr.

The digital rights for the marquee cricket tournament helped Disney+Hotstar grow, in both size and influence, as the premier Indian OTT platform. It had a 50% market share in Subscription Video on Demand (SVoD) OTT as of April 2022, according to an OMDIA report.

In an earnings report for the quarter ended April 2, 2022, Disney+ noted that Hotstar accounted for 50 Mn of its 138 Mn paid subscribers around the world.

Hotstar was launched in 2015 at a time when India’s OTT landscape was relatively barren. At that time, none of its international rivals, including Netflix and Amazon Prime Video, had entered the Indian OTT market and many homegrown OTT platforms were not launched. Hotstar was later rebranded as Disney+Hotstar following Disney’s Fox acquisition

Two years later, with the IPL coming to it, Disney Star banked heavily on the high demand for sports content to build Disney+Hotstar. Since then, the OTT platform has also introduced Formula 1, the English Premier League and FA Cup, among other sports offerings.

Disney+ has also been banking hard on sports, earmarking $10.6 Bn for sports broadcast in FY22.

Christine McCarthy, senior executive vice-president and CFO, of Disney+, had attributed Disney+Hotstar’s growth to the start of the new IPL season in April 2022.

Rebecca Campbell, the chairman of international content and operations at The Walt Disney Company was quoted as saying in various reports that the media giant “chose not to proceed with the digital rights given the price required to secure that package”.

Disney+Hotstar Set For A Rude Awakening

In short, Disney+Hostar is likely to lose a fair bit of its consumer base. The OTT platform recently hit the 50 Mn mark for paid subscriptions.

This represents about 33% of the total paid subscribers it has at the moment.

However, things could go further south for Disney+Hotstar.

According to Karan Taurani, senior vice president at Elara Capital, the OTT platform could lose as much as 50% of its subscriber base.

“If the other cricket properties go away, the number could be even higher. User base, subscription revenue and advertising revenue will be affected,” he added.

According to Taurani, Disney+Hotstar will not be able to recover only on the back of original content because of an ‘extremely challenging’ environment. With competitive intensity increasing, Disney+Hotstar will also see an increase in content costs and large-scale shows, he added.

A senior media executive at a leading broadcaster, requesting anonymity, said that since the IPL played a big role in Disney+Hotstar’s success story, the subscriber base would take a hit.

However, he reckoned that the hit in terms of advertisement revenue won’t be too much as advertisers might not go too bullish on digital-only advertising due to a lack of audience measurement tools.

In all, Disney+Hotstar is set to lose out on anywhere between 15 and 25 Mn subscribers after losing out on IPL rights for the next five years.

Voot’s Gain And The Jio Factor

Meanwhile, Viacom18, which has got the digital rights for the cricket tournament, is expected to make inroads into the OTT segment. Voot, Viacom18’s OTT platform launched in 2016, only had catch-up content so far (content that has already aired on TV). Till now, it relied only on Bigg Boss for major numbers.

In 2020, Voot launched Voot Select in a bid to scale up paid subscriptions. It also started generating more original content.

The efforts failed to make any major impact so far, as the trio of Disney+Hotstar, Netflix and Amazon Prime Video remain the OTT champions in India. However, with IPL coming in next year, the Reliance-owned OTT platform’s fortunes are sure to change.

“Voot will see a sharp growth in all metrics. Whether they will be able to monetise at the same level of ad revenue compared to Disney+Hotstar or move that up, will depend a lot on user experience and tech,” Taurani said.

Taurani reckoned that Jio might prove to be an X-factor for Voot. He said that Voot will have an edge in terms of distribution because of Reliance’s telecom arm Jio, which may also boost Jio’s average revenue per user (ARPU).

The same sentiment was echoed by Shah. “The streaming platform from Reliance-controlled Viacom18 will leverage from gaining Day 1 access to Jio’s 400 Mn broadband customers. Moreover, the rights value could be justified as the venture aims to address a much larger revenue pool of video, data and ecommerce.”

It must be noted that Viacom18 is a joint venture between Reliance Industries and Paramount Global (formerly ViacomCBS). In January 2022, media baron James Murdoch and former Star India head Uday Shankar’s Bodhi Tree Systems picked up a 39% stake in Viacom18, making ViacomCBS a minority player with only a 10% stake. Reliance retained a majority stake in Viacom18 after the sale to Murdoch and Shankar.

Jio also has its streaming service, JioTV, and it is widely believed that Jio will air the IPL on it as well. Assuming that it does, Viacom18 will have access to an audience almost 10 times larger than Disney+Hotstar’s total subscriber count.

What’s Next For Viacom18?

Winning the digital rights for the IPL is a big achievement for Viacom18, but it is just the beginning of a long journey. While a quality content pipeline is important for any OTT platform, equally important is the user experience.

Disney+Hotstar was built for IPL, and it not only made sure that the users got the sort of immersive experience on the platform that they would get on a regular TV but also extra value for their subscription.

The platform introduced multiple interactive features for IPL, such as polls, a live audio feed, and Hotstar-exclusive supplementary content such as highlights, mid-match shows and discussions.

Voot will have to ramp up the user experience as whatever it provides will be compared with the offerings of Disney+Hotstar. The IPL is an asset that will naturally attract scores of paid subscribers in the cricket-crazy nation. However, it also means that the margin for a decline in the quality of user experience is almost nil.

“Disney+Hotstar took two years to build the platform before Star India acquired IPL rights. While Viacom18 already knows the OTT business, it still needs to invest in infrastructure to achieve the popularity that Disney+Hostar gained,” the above-quoted media executive said.

The new era of the IPL will see a rivalry emerge between TV and digital, rather than a synergy that was present previously. This was made clear by the auction numbers – while digital rights attracted a total bid of INR 23,758 Cr for the Indian subcontinent, TV rights were sold for a lower INR 23,575 Cr.

Despite the huge internet population of India, the subscription-based OTT market is still in its nascent stage in the country.

The change in ownership of IPL digital rights will have a ripple effect on the larger OTT industry in the country.

Disney+Hotstar will need to be ultra-aggressive to contain the outflow of subscribers. However, it will face strong competition as Amazon Prime Video has already announced over 40 new original shows, while ZEE5 and SonyLIV are also building a pipeline of original content.

Incidentally, SonyLIV also has a sports inventory of its own, including the UEFA competitions, multiple cricket series, WWE, UFC and tennis tournaments such as Wimbledon and Australian Open.

With a vast majority of OTT players going for original content, the content cost will increase further, making it harder for those players to make a profit.