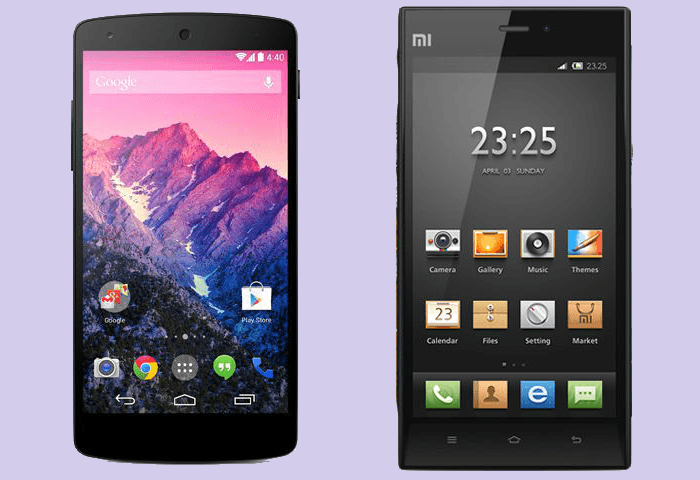 Editor’s Note: These two phones may have been released back to back at the end of 2013, but they’ve been in the news for different reasons. The Nexus 5 provided a bang-for-the-buck package with the latest and greatest of Google’s Android Operating System. The Xiaomi Mi3, although launched late in India, is being sold for half the price of the Nexus 5 and boasts nearly the same hardware.

Let’s start with the display — both have 5-inch 1080p LCD units, though the Nexus 5 is a bit compact in size and lighter in weight. Possibly one of the reasons for the added bulk is the big 3050mAh battery on the Xiaomi Mi3, that claims more up-time than what the Nexus 5’s 2300mAh battery can serve. They’re powered by the same Qualcomm Snapdragon 800 chip, have 2GB RAM, 16GB internal memory with no support for microSD card slots. Connectivity-wise, both have WiFi 802.11ac, Bluetooth 4.0 and NFC, but the Nexus 5 has the upper hand with LTE (though since it is TD-LTE and not FD-LTE, it is unclear whether it will work in India). Moving to optics, the Xiaomi Mi3 boasts a higher 13 megapixel camera unit with dual LED flash, while the Nexus 5 has an 8MP sensor with a single LED bulb. But the Nexus 5 has Optical Image Stabilization (OIS). Software-wise, the Xiaomi Mi3 runs MIUI, it’s flavour of Android which is popular in communities for its special features (like a built-in call recorder) and a steady steam of updates. Bottom line, hardware-wise the Xiaomi Mi3 is a steal for the price and makes the Nexus 5 look like a rip-off. But if you care for running the latest and pure version of Android the way Google makes it (especially now with Android L on the horizon), the Nexus 5 is what you should be buying.