To Be Held On December 13, The Fourth Edition Of LetsIgnite Will Be Attended By Angel Investors, VCs, Corporates And Influencers 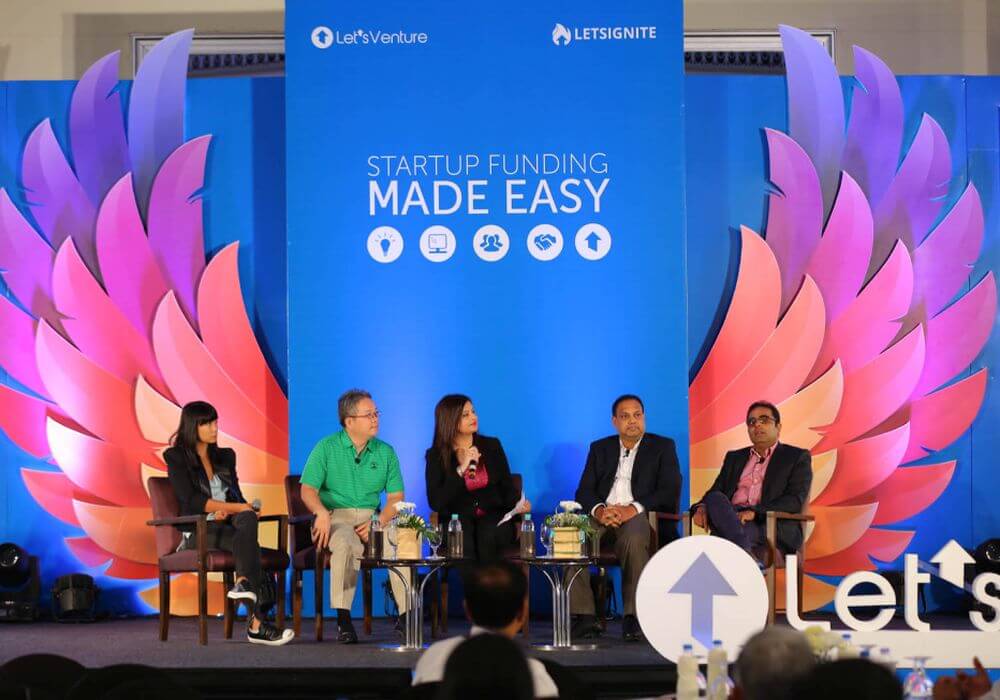 Driven by the desire to bring change and make a lasting social impact, entrepreneurs work unceasingly to realise the true potential of their vision and business ideas. Often times, however, the lack of deep pockets and competition from bigger, more heavily-funded players act as roadblocks for startups on their way to success. This is where angel investors come in.

Apart from guiding them through their initial hiccups and struggles, angel investors usually help startups raise their first institutional funding rounds. Angel investors get involved in startups at very early stages of their lifecycle and invest not just money, but also their time and other resources.

Until a few years ago, angel investors were mostly high net-worth individuals (HNIs) with abundant financial resources. However, with the gradual evolution of the Indian startup ecosystem, more and more experienced entrepreneurs are jumping on the bandwagon, which could be why the participation of angels investors in startup funding underwent an impressive 27% growth in H1 2017. According to Inc42 DataLabs, over 1668 unique angel investors have provided financial backing to Indian startups since H1 2015. In H1 2017 alone, angel investors participated in more than 326 deals.

As a major boost to the country’s angel investor community, Bengaluru-based LetsVenture is all set to host the fourth iteration of its flagship event, LetsIgnite, in Mumbai on December 13. Bringing together prolific angels, VCs, ecosystem influencers, corporates and family offices, the event aims to initiate fresh discourse on two of the most trending sectors: Agritech and India 2.

The flagship Angel Investing masterclass will also add to this dialogue via personal experiences and stories of prolific angels. LetsIgnite 2018 will not only focus on the current state of the investment ecosystem, but will also concentrate on structuring conversations on  ‘what ’ and ‘how’ to truly influence the way forward. The theme of LetsIgnite this time is “Beyond Boundaries”, with the aim of going beyond the traditional ways of discovering and nurturing startups and creating value.

Commenting on the upcoming event, LetsVenture co-founder and CEO Shanti Mohan said, “Agritech has long been underserved from a startup perspective. India 2 (or Bharat) is again something that has humongous untapped potential. With the maturity of UPI, IndiaStack and other enablers coupled with the increased focus of financial inclusion by the central government, this is a once-in-a-lifetime opportunity to create change at a scale never seen before anywhere in the world. We believe that this is the right time to talk about the trends and help angels discover and nurture interesting startups in these areas,”

Founded in 2013 by Shanti Mohan and Sanjay Jha, LetsVenture has facilitated funding for over 132 startups till date, amounting to a total of over $50 Mn. The Nandan Nilekani, Ratan Tata– and TV Mohandas Pai-backed online fundraising platform currently boasts more than 7,500+ connections and 2,500+ investors.

LetsIgnite was started by LetsVenture in 2015 for investors to meet like-minded peers and policymakers, interact with pre-screened, cutting-edge startups and be a part of a community that will drive the investment fraternity ahead.

According to Mohan, “We believe that India can be a hub for innovations that can then be adopted in different countries outside. In any healthy startup ecosystem, angel investors play a key role in impacting early stage startups. By sheer virtue of their numbers being higher than the number of funds, they are able to talk to, mentor and invest in a much larger number of startups than funds can.”

Similarly, large corporates, by simply adopting technologies from startups and working with them, will elevate the level of dialogue and rapidly build confidence in these startups. Ecosystem influencers also need to play the role of glue in bringing together these disparate parts of the community and speak up more often on the roadblocks for innovation in these sectors.

Through LetsIgnite, the organisers intend to provide the country’s angel investor, corporate and influencer communities with a platform for interaction, engagement and collaboration. The last edition of LetsIgnite, held in March this year, revolved around the following theme: “Building an ecosystem that is conducive for exits”. Over 400+ individuals, including 200+ angel investors, 70 VCs and 30+ panel members, will be attending LetsIgnite 2018 to discuss key trends in the agritech and India 2 sectors.

Attendees will also be given access to select data points and infographics on micro and macro trends impacting investing patterns in the Indian startup arena. Twelve promising startups that have gone through rigorous curation, will also be pitching their ideas and business plans before a qualified audience of angels, VCs and influencers.

How Agritech Is Restructuring The Indian Agriculture Sector

With more than 58% of the rural population relying on agriculture for sustenance, India currently ranks second globally in terms of farm output. As per Inc42 Datalabs, the size of agriculture and allied activities in the country underwent a near-100% growth between FY14 and FY15. Agricultural exports increased from $24.7 Bn in 2011-12 to $32.08 Bn in 2015-16; a CAGR of more than 6.75%.

According to an IBEF report, in FY17, agriculture accounted for over $1,640 Bn (INR 1.11 Tn) of the country’s GDP. In a bid to double the average farmer’s income by 2022, the Indian government has launched an array of schemes to facilitate the market’s growth such as the Paramparagat Krishi Vikas Yojana, the Pradhanmantri Gram Sinchai Yojana and the Sansad Adarsh Gram Yojana.

Talking about the role that startups play in bolstering the country’s agriculture sector, LetsVenture said, “In the recent past, cost-efficient cold storage technology, a growing demand for fresh and organic produce and other factors have come together, bringing a resurgence of the sector.

Agritech startups can focus on increasing produce output from the same land, reducing inefficiencies and wastage in the farm to fork value chain, handle storage and shipping optimally, optimal farm equipment sharing and usage and other areas. All of these have the potential to increase farmer incomes in the coming years and help protect their interests, while also contributing handsomely towards the GDP.”

Through LetsIgnite, LetsVenture is looking to encourage more entrepreneurs to develop solutions tailored for the agriculture segment, through the integration of emerging technologies such as AI, ML and IoT.

“For example, there are drone startups that are using spectrometry to analyse the colour of leaves over a large geography, in order to determine the nitrogen and other nutrient content in them. Clubbing that information with data on temperature, humidity and rainfall, these startups are striving to arrive at predictive fertiliser usage plans. The drone and the ML are just tools here. The application and determining that this is a problem for farmers is the hard work that is needed in agritech startups,” added the spokesperson.

To that end, LetsVenture will give three agritech startups the opportunity to showcase their ideas and businesses in front of investors, VCs and other ecosystem enablers.

India 2: Catering To The Next 300 Mn Indians

“India 2 (Bharat) refers to the next 300 Mn Indians beyond the top 50-60 Mn that every other startup is targeting. The technologies used, the language adopted to communicate, the business models that need to be employed – they are all very different to succeed in this target market. Most of the principles startups employ for the affluent Indians may not work in this target market. Given this insight, it is essential to approach India 2 with a very open mind and unlearn many of the startup growth tenets that we have adapted from the developed countries,” explained LetsVenture during an interaction with Inc42.

According to the online funding platform, the solution lies not just in funding but in working collaboratively with entrepreneurs who are passionate about this problem statement and are willing to roll up their sleeves and step into the trenches for the long haul.

Although the gap in terms of access to knowledge is reducing in tier II and tier III cities due to increasing connectivity, the fact remains that startups in these regions often have to contend with poor access to infrastructure as well as role models that they can talk to, share and exchange real working examples.

However, with the government rolling out technology business incubators (TBIs) in different educational institutions, NASSCOM and different states allocating startup funding budgets, startups in this space are destined for a bright future. More investors actively sourcing startups from these regions will also help in accelerating this process.

As stated by the spokesperson for LetsVenture, “While every type of conference has a role to play in building the ecosystem, there has been a conference fatigue in the recent past. LetsIgnite has always focused on being content-led and is almost like an extended day-long workshop which focuses on knowledge and true connections as opposed to superficial panels and networking.

Our vision is one of enabling more and more angel investors to make informed decisions on discovering and nurturing startups, and discovering trends that can provide them with a fulfilling and enriching experience.”

With LetsIgnite, the organisers are also looking to enable promising startups that go through LetsVenture’s rigorous curation process to raise funding successfully. And if its past track record is any indication, 80% startups participating in LetsIgnite will probably be able to close their fundraises within three months of the event!

The event will kick off with an “Angel Investing Workshop” led by Rajesh Sawhney and Vikram Chachra, followed by the first round-table focussing on the agritech sector. It will be joined in by Ajay Lakhotia of FOSUN RZ Capital, Unitus Seed Fund Venture Partner K. L. Mukesh and Aspada Investment Advisors’ Sahil Kini. The next panel discussion, “Identify The Blue Ocean In Angel Investing – Upcoming Sectors”, will feature Prime Venture Partners’ Amit Somani and People Group founder and CEO Anupam Mittal.

The final round-table of the day will revolve around ‘India 2’. Apart from Goibibo founder Ashish Kashyap, Jitendra Gupta of PayU and Everest Flavours’ Siddharth Ladsariya will be participating in the discussion. The event will also include an engaging interview with Sharad Sharma, co-founder of iSPIRIT Foundation. The day will end with a closing note by Rajan Anandan, Vice President of South East Asia and India for Google.

Startup Applications for the Delhi edition of LetsIgnite 2018 to be held on 14 February 2018 are open. Click here to apply. Applications close on 17 December 2017