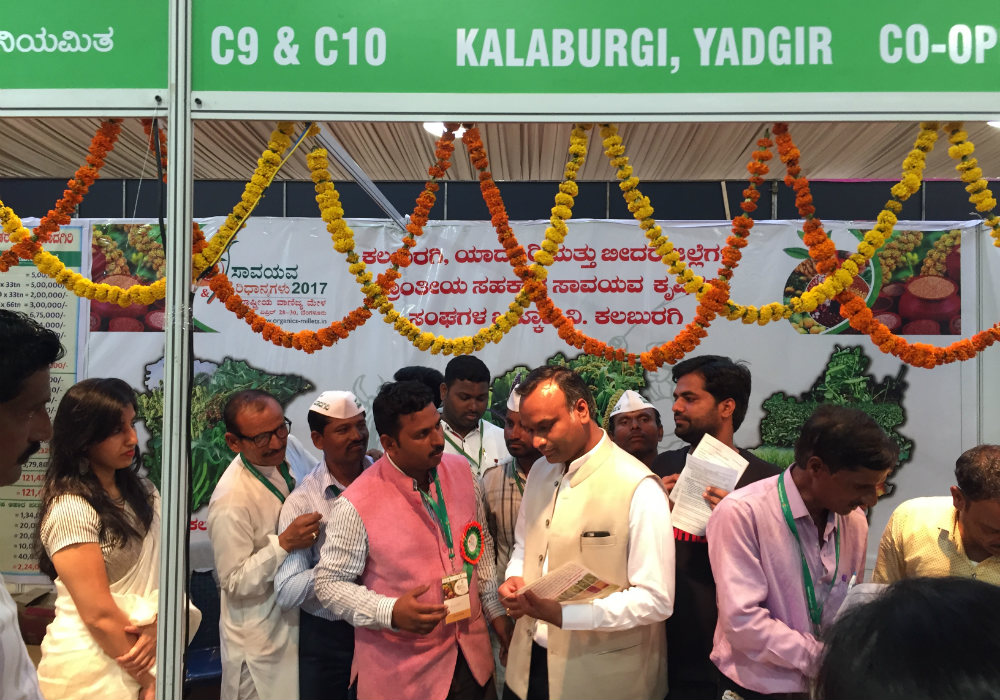 In order to fuel the growth of innovative ideas in the agritech sector, Karnataka’s agriculture department has set aside about $1.5 Mn (INR 10 Cr) fund to be administered by the information technology and biotechnology (ITBT) department.

The Department of Agriculture, Government of Karnataka organised ‘National Trade Fair 2017- Organics and Millets’ in Bengaluru from April 28-April 30, 2017 to give organic and millet farmers a national platform to showcase their produce. At a session during the National Trade, Fair Karnataka’s Agriculture Minister Krishna Byre Gowda and ITBT/Tourism Minister Priyank Kharge spoke passionately about bringing in technology in a big way in agriculture.

It was also stated the Karnataka will soon call for a hackathon for technology-enabled ideas and innovative ways to address challenges in agriculture.

Speaking at the panel, Priyank Kharge, Minister of State, IT BT & Tourism Department, Government of Karnataka said, “Karnataka is the only state that has a Proof of Concept (Idea2POC) Grant Scheme, under which the government aims to issue up to $77K (INR 50 lakh) as part of its multi-sectoral startup policy and work with various stakeholders to create ideation and incubation sectors. A budget of about $1.6 Mn (INR 10.5 Cr) has been allocated for agriculture innovation startups which will be allocated in May 2017 to selected startups. The government also assists startups in the agri space with Series A and B funding by connecting them to investors.”

Kharge further added that startups in Tier II cities are also being funded by the state by registering with the state startup cell.

In order to get a remunerative market for the farmers and a reasonable price for the consumers, the Government of Karnataka has promoted 14 district-level Organic Federation of the Farmers covering all 30 districts in the State.

More than 30 buyers from various MNCs and local wholesalers, distributors emerged with a long term business potentials. Over 20 MoU’s were signed between farmer federations and leading brands at the National Trade Fair.

Talking about the economic benefit of the trade fair, Krishna Byre Gowda, Minister for Agriculture, Government of Karnataka said, “Around $110K-$125K (INR 70 Lakhs-INR 80 Lakhs) worth of business has happened at the fair with an immediate impact of about $7 Mn (INR 45 Cr) of business opportunities. The long-term impact will be in the range of $15.5 Mn (INR 100 Cr).”

The Karnataka State Government has been proactive in encouraging startups in the state. Earlier in July 2016, the Government of Karnataka, announced a set of schemes with an aim to bolster the startup ecosystem in the state, which included a $60 Mn fund, the launch of a startup cell in Karnataka Biotechnology and Information Technology Services (KBITS), and more. In September 2016, the Karnataka startup cell funded eight startups with $300K (INR 2 Cr), that have built unique tech solutions for the tourism industry in India.