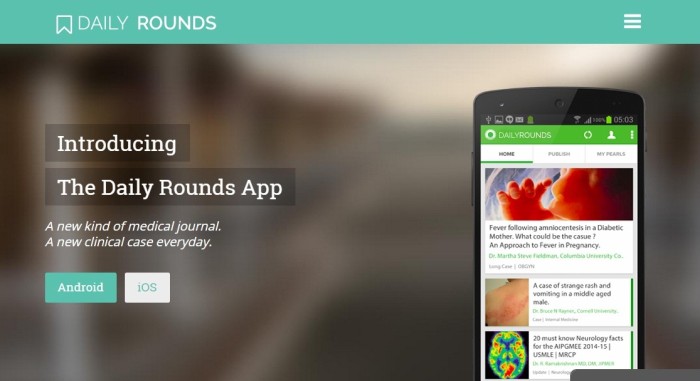 Daily Round is a mobile app for Doctors, Medical Schools, Physician & Surgeon societies to publish clinical cases, articles and images .

The app is currently available on Android and is used by over 45,000 doctors, as per the company, it adds 300 new doctors daily on its platform every month. Going forward, the startup plans to launch its iOS application by next month and further, it plans to reach 200,000 doctors by the year end.

Besides, Daily Rounds is also a part of Microsoft Ventures Summer 2015 batch which was announced earlier this month.

Founded in 2014 by Deepu Sebin, along with co-founder Nimmi Cherian, former research officer, IIT-Madras on the Akash tablet project and Priyaank Choubey, ex-CTO at Spiffout,

While monetisation is not on the cards right now, the company expects to ultimately make money through subscription of premium case studies, ads and even analytics, according to Sebin.

Players like Practo, search engine for doctors and appointment booking, had raised $30 Mn funding from Sequoia Capital and Matrix Partners in Feb this year; whereas, Qikwell Technologies that connects patients and doctors raised $3 Mn in series A round of funding lead by SAIF Partners.

On the investment Sasha Mirchandani, Kae Capital said, “We are very excited to be part of the journey in Daily Round. The team has done a great job of engaging the doctors on the app by providing them high quality content. The key metrics on usage of the app by the doctors was compelling enough for us to make an investment.”

Kae Capital is also an investor in SysCloud, Eventifier, TrulyMadly across genres of verticals.