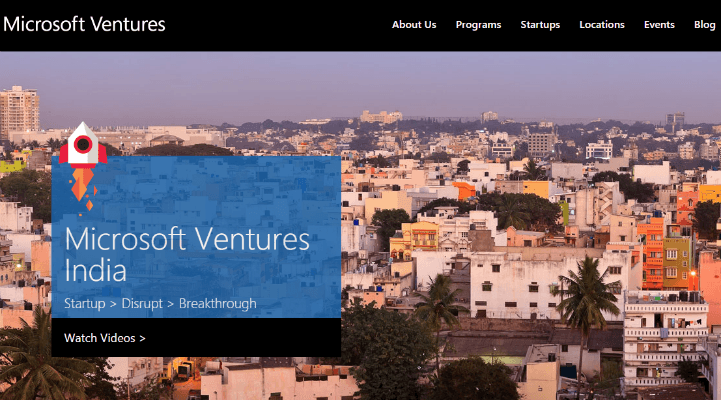 Microsoft Ventures in India has launched Accelerator Plus and Scale Up as the 2 new accelerator programs during its unveiling the names of the 11 startups that are part of its Summer 2015 batch.

The two new programs are focussed on helping later stage startups in gaining acceptance in the marketplace.

“The Indian startup ecosystem has evolved and has new challenges now. One of the key issues we identified at the last All India Accelerators & Incubators Meet was that there was little or no help available for later stage startups in India. This concurred with similar observations made during the pilot of Accelerator Plus, where we noticed that the 10 later stage startups who went through the pilot program benefitted more from the mentoring and showed better results, faster. This prompted us to bring in new accelerator programs to help the later stage startups,” said Ravi Narayan, Managing Director, Microsoft Ventures in India.

AdPushup: Its a ad analyzing startup that allows web publishers and bloggers to create and test different ad placements, sizes, and types to see which ones make the most revenue from its A/B testing platform.

Frilp: Chennai-based Frilp is an online platform that helps user discover a shop or service through their friends and people.

iBot: A tech startup that focuses on design, development & manufacture of high-tech electronics & software to connect the real and digital worlds.

These startups were selected out of 1,400+ applications, of which about two-third applications were referred by VCs, Angels and organizations like Nasscom and TiE.

Samir Kumar, Managing Director, Inventus (India) Advisors, who was among the jury for the shortlisting process of the Summer 2015 batch said, “India is witnessing an unprecedented surge in entrepreneurship, as a large number of new companies are launched every day. The angel and seed ecosystem has matured to help them get a good start. However, today, scaling up is the real challenge for an Indian entrepreneur. With Microsoft Ventures’ Scale Up & Accelerator Plus programs set to address the requirements of middle to later stage startups, we’ll see the mature startups propel themselves faster to the next orbit. As an investor, I believe, this is a very important step in the maturing of the startup ecosystem.”

Ravi Narayan, MD, Microsoft venture, India said that the top 200 shortlisted startups who applied for the Summer 2015 will be referred to the next batch of Microsoft Ventures Partnered Accelerator Programs and the early stage startups will be invited to join the BizSpark program.