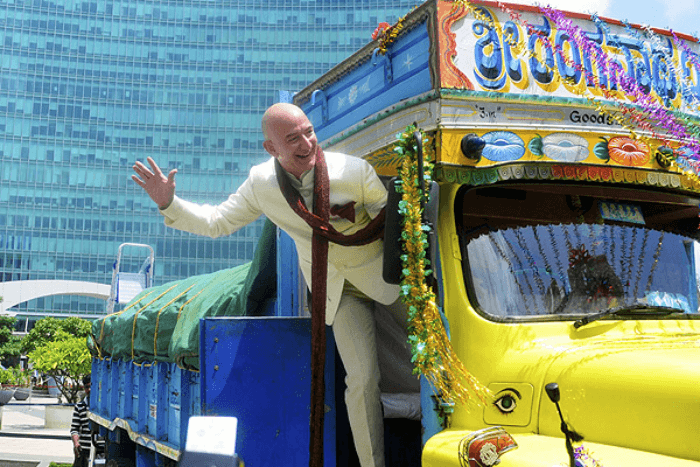 Flipkart VS Amazon, the game which has the Indian ecommerce market glued, took a desi turn to become even more interesting.

On Sunday he was seen on top of a truck flashing a big $2 Bn cheque with a big smile. “We’ll work to better what Indians love most in shopping — vast selection, competitive pricing and fast delivery.” 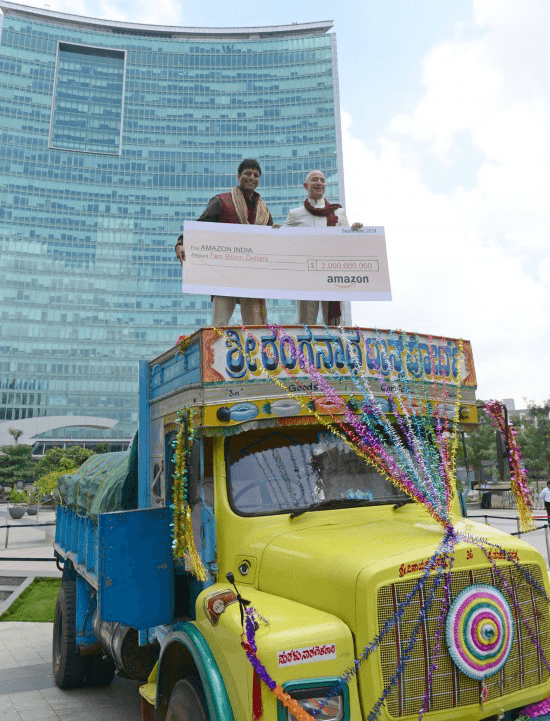 Earlier this year Amazon had announced $2 Bn investment for its Indian operations which it plans to invest in infrastructure, new fulfillment centres, customer acquisition, new product categories, payments, new tools to make it easier for SMEs to get online, into mobile. “Amazon is little over a year old in India. But the local team here has blown past the initial set of goals,” he said.

Well at the same time Flipkart was seen executing what it calls the ‘Welcome Mr Bezos’ campaign for which Flipkart has up huge billboards at the airport, highways and close to Amazon’s headquarters for its festive season sale campaign called Big Billion Day. This is expected to follow Bezos to Delhi where he is scheduled to go next, reports say.  Not only this, it is also running a ‘Project Victory’ campaign, a celebration of what it calls a win in the first round of war with Amazon.

“It’s a panic reaction to the fact that Amazon is not able to make any inroads in India. Our market share has increased in the last six months,” said Sachin Bansal on Bezos India visit.

Both Flipkart and Amazon have been seen taking up initiatives to remain a step ahead each other in the country. Be it by launching new categories or products exclusively on its platform or even innovating in the delivery mechanism.

“We stick to our approach, stay heads down and don’t pay much attention to our competitors. It’s a customer-centric strategy. There is room for lots of winners. It’s true everywhere we do business. In the US, we are about 20% of e-commerce. These are big markets. It’s early even in the US, in India, everywhere,” Bezos said.

Well we don’t know whether Bezos is panicking or not, though announcing $2 Bn investment in Indian operations just a day after Flipkart announced $1 Bn funding does makes one think; however Jeff’s visit to India has surely made an impact on Flipkart.