Bezos said that dynamism, energy, and self-improvement factor of Indian attracts him

The challenge of hiring for senior leadership roles is the most crucial one: Bezos

Bezos was in conversation with Amazon India Head Amit Agarwal 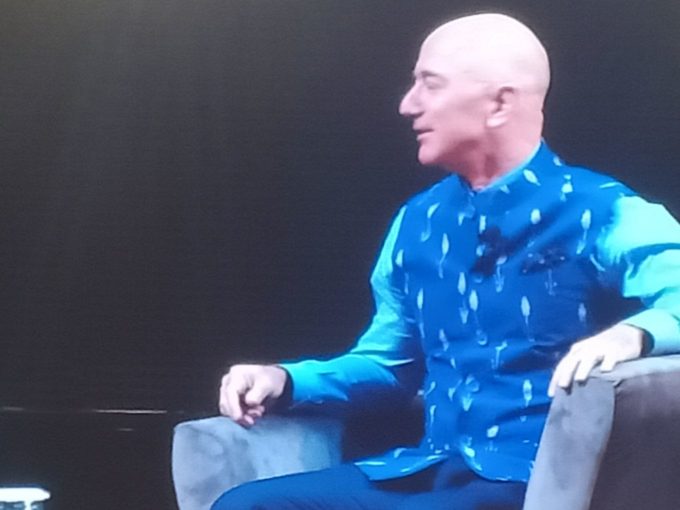 Amazon founder and CEO Jeff Bezos kicked off his three-day India visit on Wednesday, with a fireside chat with Amit Agarwal, Amazon India head, at the Amazon Smbhav event in New Delhi.

‘21st Century To Be India’s Century’

Impressed with India’s growth trajectory, Bezos wasn’t shy to predict that this century belongs to India. According to Bezos, factors like dynamism, energy, and the interest of people in self-improvement will show results. “21st CE To Be India’s Century,” he added.

During the interaction, Bezos also said that in the upcoming times, the tie-up between India and US is going to change the landscape of the partnerships between the two nations.

When asked to give advice to entrepreneurs present at that event, Bezos said that it is different for different stages in a company.

The Amazon head said that startups at the initial stage face the difficulty of ‘how to do it’. Thought it soon changes to the problem of ‘what to do’, the most difficult part comes when a company finds out what to do.

“When a startup reaches the stage of expansion, the challenge of hiring for the senior leadership roles is the most crucial one as you would be hiring someone from whom you would be learning. This is the secret for Amazon’s expansion,” Bezos added.

Failures Come Along With Innovation

During his talk with Agarwal, Bezos also talked about failures and how entrepreneurs can learn from them. Highlighting how failures helped him to grow Amazon, Bezos said that Amazon is the best place to fail.

However, he was quick to differentiate between failures, which come along with innovation and the ones which are repetitive. The Amazon chief said that while failures during innovating something help entrepreneurs in the long run, entrepreneurs can’t afford to fail in doing something which they have done already. “For instance, Amazon can’t fail in setting up a new warehouse,” Bezos added.

Besides attending the Amazon Smbhav event, Bezos is expected to meet Prime Minister Narendra Modi and other government officials to ease out regulatory challenges in the country.

In response to the Amazon Smbhav event and Bezos’ visit, thousands of small-scale traders union and associations have planned to organise protests across the country. Traders’ body Confederation of All India Traders (CAIT) had already said that it will protest across 300 cities during Amazon chief’s stay here.