Investment In The Indonesian Startup Ecosystem Has Increased 68 Times In The Last Five Years, The Study Revealed Indonesia – the land of a thousand kings. An exotic country chock-full of beauty, culture and a rich heritage. Home to more than 261.1 Mn people spread across 17,508 islands, Indonesia has undergone dramatic urbanisation in the last couple of years. Today, it boasts a thriving startup ecosystem. As per a report by Google and management consulting firm AT Kearney, in the first eight months of 2017, Indonesian startups collectively raised $3 Bn in 53 investment deals. 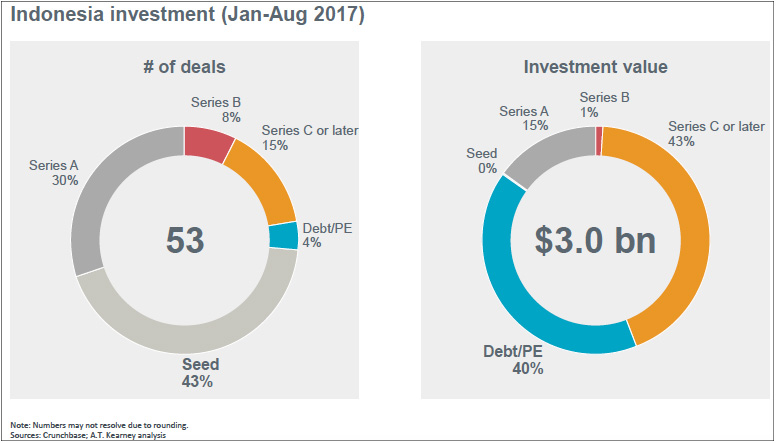 According to the study, titled “Indonesia Venture Capital Outlook 2017”, investment in the country’s startup market jumped 68 times in the last five years to around $1.4 Bn in 2016.

Commenting on the spectacular growth of Indonesian startups,  AT Kearney partner Alessandro Gazzini said at a recent press conference, “Due to the massive growth, the value of startup investments in Indonesia may surpass the nation’s oil and gas investment which was$5 Bn in 2016.”

As part of the survey, Google and the team from AT Kearney conducted thorough analysis of Indonesia’s VC landscape as well as investment flow. The information presented in the report was collated from multiple interviews with more than 25 domestic and international venture capitalists.

The objective of the study, according to Gazzini, was to unravel the investor’s outlook and priorities when it comes to infusing funds in Indonesian startups. As per the report, majority of these investments in the country’s startup ecosystem continues to be at the Seed and early stages.

Between January and August 2017, there was a total of 53 investment deals, of which around 43% Seed funding and approximately 30% Series A infusion. Nevertheless, late-stage investments have also increased since the beginning of the year, with 43% of the net $3 Bn investment taking place at Series C and later stages. 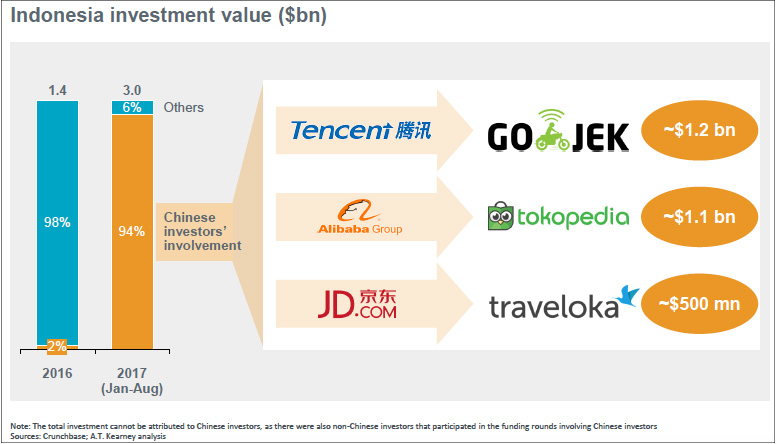 This year, a staggering 95% of the total investment in Indonesian startups came from China. The major funding rounds in this category include China-based Tecent’s $1.2 Bn infusion in on-demand mobile platform Go-Jek and Alibaba Group’s recent $1.1 Bn investment in ecommerce startup Tokopedia in August.

The remaining 5% of the total $3 Bn funding secured by the startup ecosystem was contributed by investors from other countries. As predicted by the Google-AT Kearney report, around 21% of Indonesia-based investors are likely to decrease investments. Another 21% will possibly maintain their investments in the coming few years, while more than 57% of them will increase their investments in exchange for large stakes in the investee companies.

Compared to that, only around 20% of foreign investors showed an inclination towards decreasing investments. The remaining 80% expressed their keenness in increasing their investments.

“We were blown away by how enthusiastic the VCs were and how incredibly bullish they are on Indonesia. The potential for growth is incredible but so is the need for engineers. This is not about incremental change. There needs to be a massive push to create more talent if these startups are going to be able to scale and meet demand. The government can play a strong role, as evident from mature markets,” added Gazzini.

He went on to say, “Future investment in startups is highly dependent on investor confidence in the market, so it is crucial to understand how investors view the Indonesian market, in both the near and long-term.”

Ecommerce And Transportation Riding The Wave Of Growth 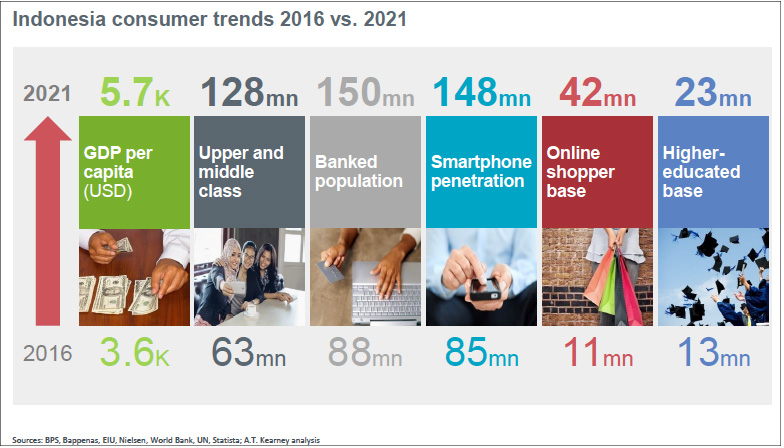 According to a Google consumer survey, around 7.4 Mn people shopped online in 2015 in Indonesia, grossing sales worth over $3.6 Bn. The space is home to a multitude of online marketplaces such as Blanja, Berrybenka, Tokopedia, MatahariMall, Luxola, Sejasa, Kudo, Sociolla, Fabelio, and aCommerce.

In the third week of August, Indonesia-based fashion ecommerce startup Sale Stock secured $27 Mn in Series B in a round led by VC firm Gobi Partners. Other investors Alpha JWC Ventures, Convergence Ventures, KIP, MNC and SMDV also participated in the funding round.

When it comes to transportation, Go-Jek is a major player that handles logistics, payment, food delivery and more. Other startups in this segment include GoGoVan, Lalamove, Deliveree and 8Commerce, among others. Recently, Go-Jek acquired Loket, a leading event management and ticketing platform in Indonesia, for an undisclosed amount.

According to the stats put forward in the “Indonesia Venture Capital Outlook 2017” by Google and AT Kearney, ecommerce and transportation currently enjoy top positions in terms of investment flow. As per the report, over 58% of the total funding raised between 2012 and August 2017 was in ecommerce. The second in line was transportation with a 38% share.

Tapping Into The Tremendous Potential Of Fintech And Healthcare

Presently, there are more than 150 fintech startups in the country; a number that has increased by 78% since 2015. Of this, crowdfunding and alternative lending startups constitute over 25% of the total fintech pie. Major Indonesian startups in the field include Modalku, Taralite, and crowdfunding platform Kitabisa.

In August 2017, consumer lending platform UangTeman secured $12 Mn in equity and debt funding. The Series A funding round, as per reports, was led by K2 Venture Capital and Draper Associates. A month prior to that, peer-to-peer (P2P) lending company Julo reportedly raised an undisclosed amount of seed funding from East Ventures, Skystar Capital and Convergence Ventures.

Back in June, Indonesian conglomerate Salim Group reportedly acquired 51% stake in a local Bank Ina Perdana for $42 Mn, in a bid to enter Indonesia’s e-wallet and P2P lending landscape.

In fact, these numbers are in line with the report by Google and AT Kearney, according to which fintech and healthcare have the potential to emerge as the most attractive categories for investors within the country’s startup ecosystem. Among the VCs and investors interviewed for the study, approximately 67% voted in favour of fintech, while 25% seemed optimistic about healthcare.

Google AT Kearney Report: A Window Into The Future Of Indonesian Startup Ecosystem 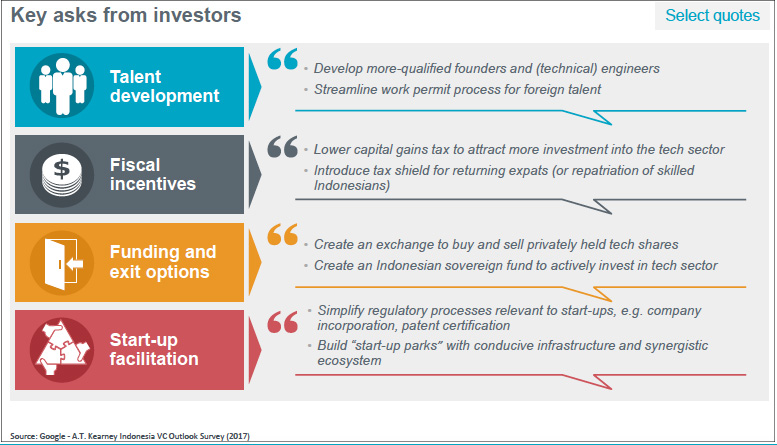 The startup ecosystem of this archipelago nation has witnessed swift growth in recent times, as a result of deeper penetration of the Internet, smartphones and social media. Nevertheless, a lot needs to be done before it can compete with neighboring nations in Asia, like China and India.

According to Alibaba founder and the newly-crowned richest person in Asia, Jack Ma, inadequate logistics infrastructure is one of the major challenges impeding the growth of emerging sectors such as ecommerce.

In a recent meeting in Beijing with the current Indonesian Coordinating Minister for Economic Affairs, Darmin Nasution, and Minister of Communications and Informatics, Rudiantara, Ma said, “Indonesians live across more than 17,000 islands, putting in place a comprehensive logistics network is a key challenge faced by the country’s ecommerce industry. To overcome this, two basic infrastructure issues need to be resolved with regards to the information network and logistics network.”

As per the report by Google and AT Kearney, four other areas that need to be bolstered for accelerating the growth of the Indonesian startups are talent development, fiscal incentives, funding or exit options and startup facilitation. The study, the first of its kind in Indonesia, marks a significant moment for the country’s startup ecosystem as it offers valuable insights and suggestions for founders, investors, policymakers, and other stakeholders.