A Fitness Coach, A Bot That Waits Tables, And A Bot That Deejays: What Came Out Of TLabs’ Bot Hackathon

A Fitness Coach, A Bot That Waits Tables, And A Bot That Deejays: What Came Out Of TLabs’ Bot Hackathon From bringing you your daily dose of news to booking a cab for you; from answering your health queries to resolving your fashion dilemmas; from being your personal assistant to being your personal gym trainer; bots are now doing it all for you, day in day out.

But why have bots become the new flavour of the season in the Indian startup ecosystem?

Because everyone from Microsoft to Google to Facebook is jumping on the bot bandwagon as they constitute a paradigm shift from the traditional graphical user interface (GUI) to a whole new interface of getting things done easier, faster and in a more intuitive way. They allow for higher user engagement, right from the mobile as they give users an experience that is not passive.  Bots make users feel like they are working with an assistant to achieve their ends rather than interacting with a machine.

Bots and the artificial intelligence powering them are irrevocably changing the way we live every single day. There are approximately 33,000 bots built for Messenger that allow users to buy anything from flowers to airplane tickets. It is no wonder then, that more such interesting use cases came to light at India’s first ever bot hackathon or botathon hosted by Haptik and TLabs and aided by Venturesity, the hackathon organising platform. 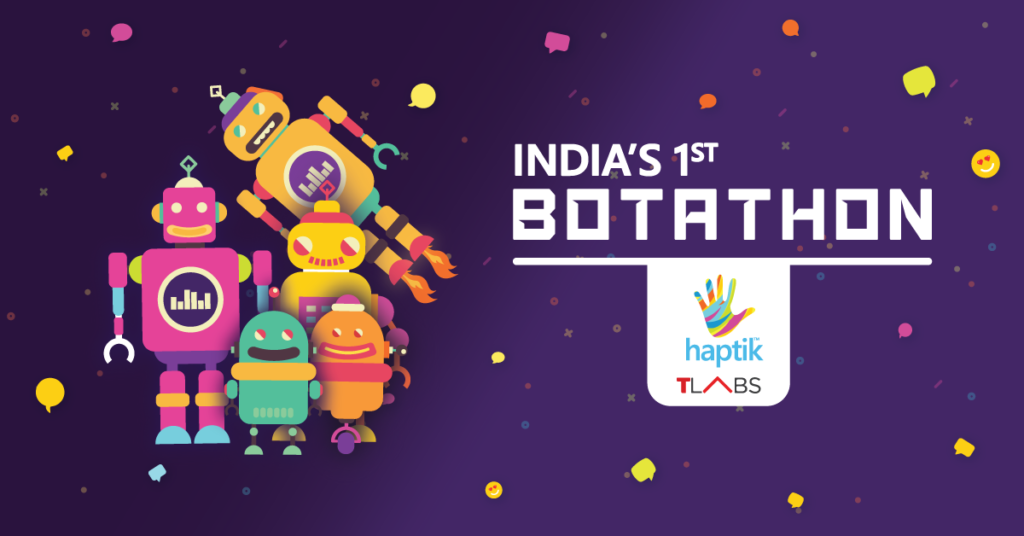 The planning for the Botathon started almost two months back and the registrations were open almost 25 days prior. And it all culminated at the TLabs office in Koramangala, Bengaluru on December 10, 2016. Starting at 11am, the participants got 24 hours to conceptualise and build the bots. So by 11am the next day, participants were expected to have built conversational chat bots to solve various problems. A curated list of 42 teams comprising 100+ members were selected from a pool of 500 initial applicants. 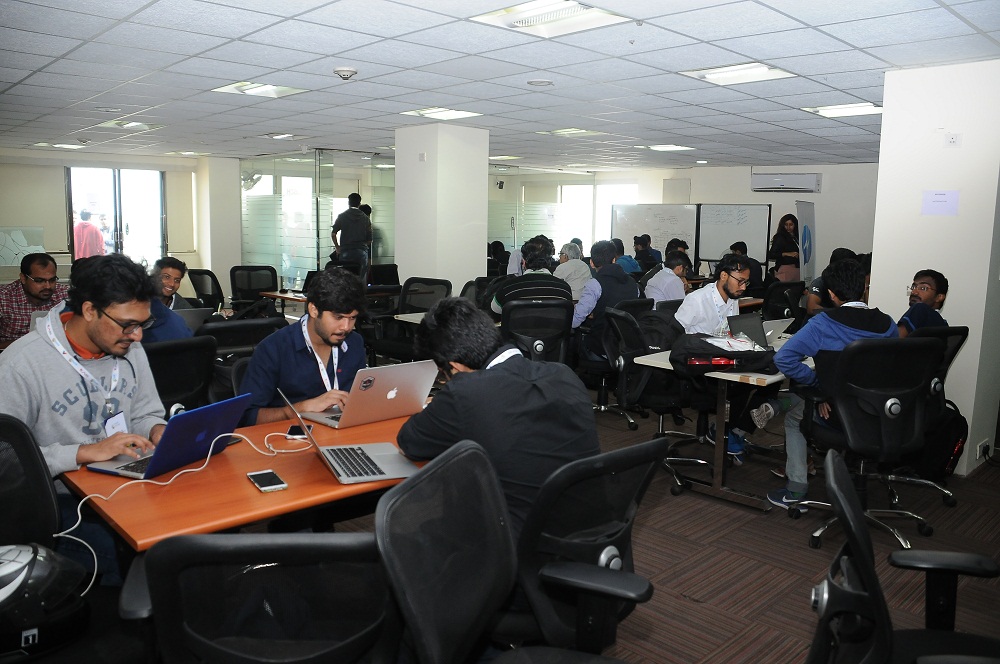 All the teams were assisted with mentors who were experts in the fields of AI and Machine Learning (ML) to help them sketch and build the bots. These included Abhishek Gupta, COO TLabs, Abhimanyu Godara, founder, Bottr.me, Swapan Rajdev, co-founder and CTO, Haptik, Pratyush Prasanna, founder of MagicTiger, Jayvardhan Sambedu, Technical Manager, Societe Generale and Gaurav Munjal, CEO  of Unacademy.

The final 10 entries were judged on the originality of the idea, the completeness, the conversational capability, and the final demo by a panel that included Sumit Jain, Kalaari Capital, Shailesh Lakhani, Sequoia Capital and Sumit Jain, CEO of Commonfloor.com. Haptik & TLabs were on the lookout  for standout chatbot creations and features that replaced websites, manpower, resources, and expenses while delivering cutting edge, high-performing, output-enhancing user experiences. 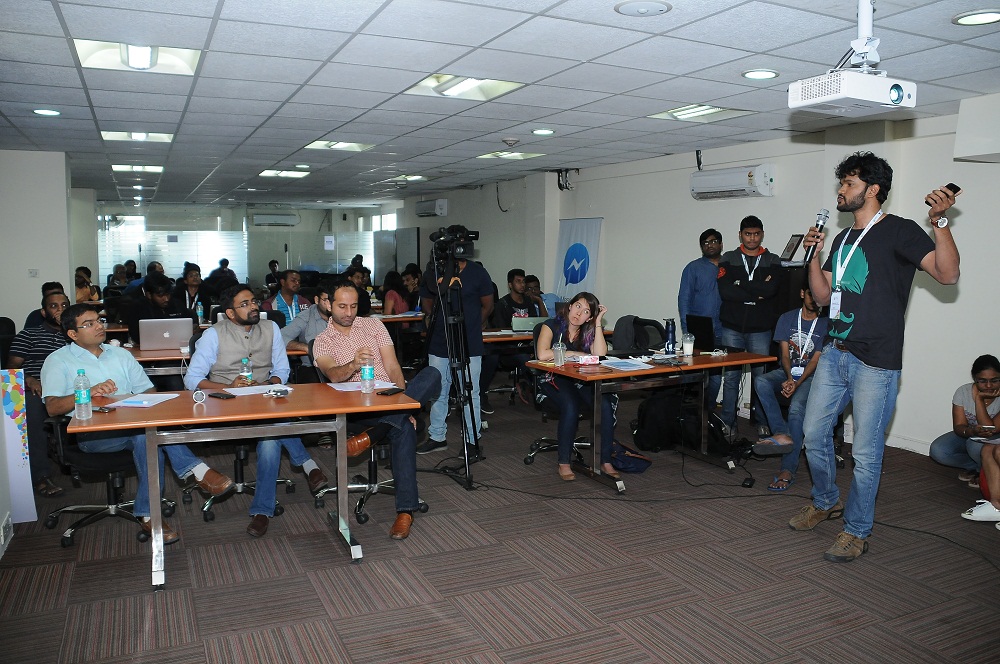 The Gym Bot, The Bar Bot, And A Bot That Deejays

Ultimately, CStrike, Brocorp and SVEN emerged as the top three winners. They walked away with INR 60K, INR 30K and INR 15K in prizes respectively.

Let’s take a look at what the winning teams built.

Team CStrike which consisted of Swarndeep Arora and Anshuman Dhamoo built a bot that helps one keep track of their fitness goals and motivates them to achieve them by analysing their calorie intake and suggesting an appropriate diet and workout regime. 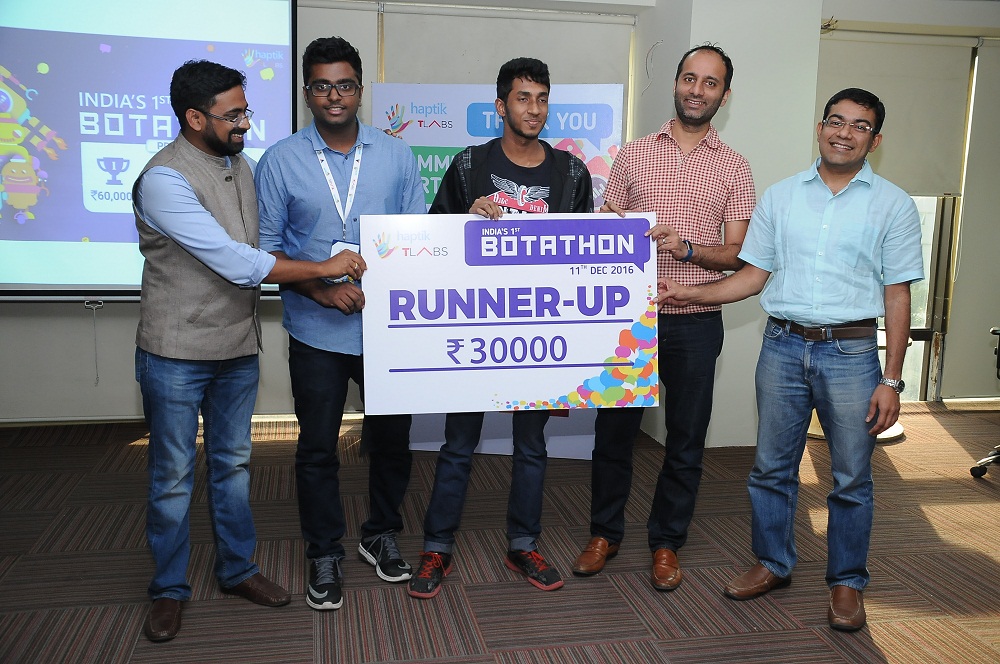 BroTender is a bot that aims to automate and simplify customer interaction at bars and restaurants without the need for waiters and bartenders. When you’re at the table, you can use the bot to ask for the menu or have it recommend one based on your taste. BroTender will add a note to the guys at the kitchen about any allergies you have or your preferences regarding flavor. It also allows you to order your favourite meal from the previous week or even invite a friend to try it out or seamlessly pay the bill online. 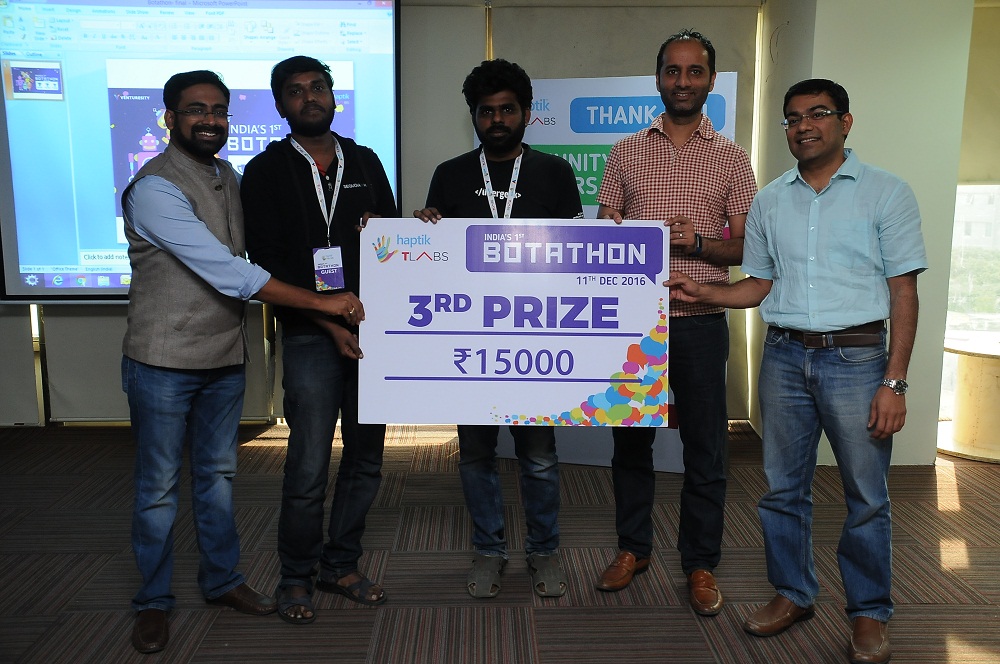 Team Sven built a slack bot (DJ) wherein a user can request for a song and the bot plays it for you. As requests keep coming in, it queues them. The bot also accepts controls like ‘next’, ‘pause’, ‘clear playlist’ to operate on the playlist as well as suggests songs to the team based on the songs played so far. Additionally, it provides additional info on the song like facts, trivia.

Interesting use cases have come out of the TLabs-Haptik Botathon and the level of innovation was commendable. The same sentiment was echoed by Aakrit Vaish, who stated, “The aim of this botathon was to get developers excited about building bots and create path-breaking solutions. We received an overwhelming turnout and were super impressed by the quality of participants. I think it is mission accomplished on all fronts and hope to see some of these solutions turn to full-fledged businesses very soon.”

And this future will be interesting to watch for – how and when these use cases of chatbots become part of a larger business.