While analysing the traffic for these streaming platforms, a trend that is visible and consistent for most is the progressive increase in website visits as the country went into lockdown. For Feneo Movies, the visits increased from 130,000 in February to 220,000 in March, an increase of about 70%. Visits for April remained steady at 220,000, before slumping to 140,000 in May, as the lockdown was gradually eased in parts of the country. 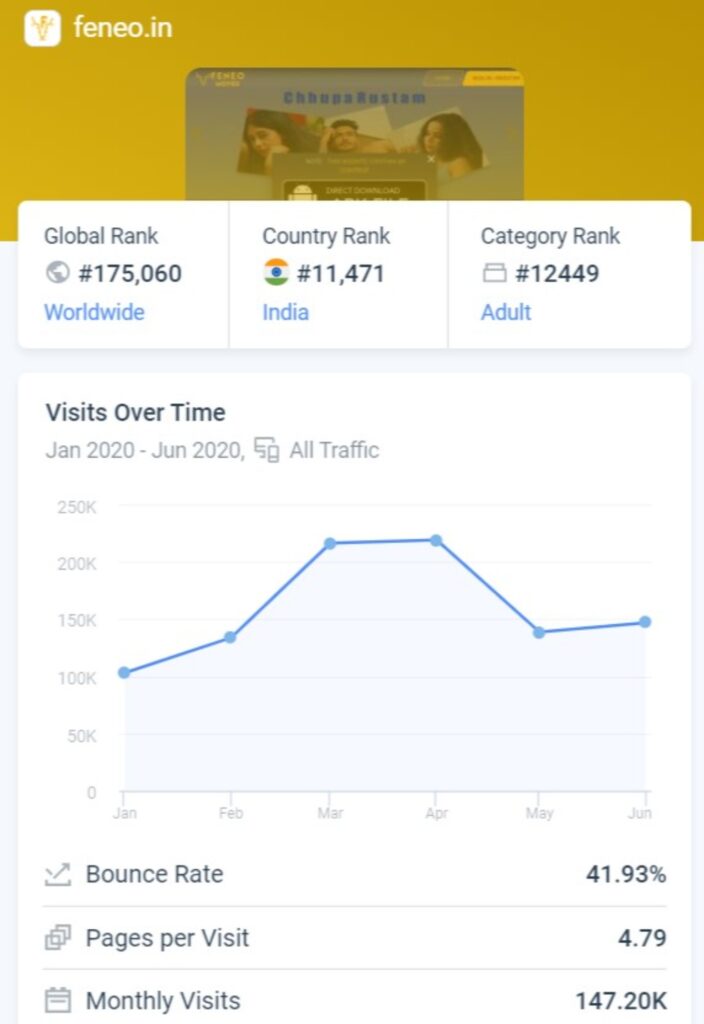 For another streaming platform Kooku, visits increased by 60% from February to March, and then by another 58% in April, when they stood at 190,000. Thereon, the total monthly visits fell to 140,000 in May, before registering a 35% spike in June and jumping to 190,000. Gupchup also witnessed an 80% increase in website visits from March to April.

As for Fliz Movies, it easily surpassed its competitors in the segment, consistently witnessing around 700,000 monthly visits since the beginning of this year. Fliz Movies also bucked the trend of growth in viewership during the lockdown, with its numbers remaining largely consistent, hovering around the 700,000 mark from January to April, before witnessing a 32% fall in visits in May.

Fliz Movies also leads the pack in terms of downloads, along with Kooku, both having more than 1 Mn downloads each for their mobile applications on the Google Play Store. In contrast, Gupchup, Feneo and The Cinema Dosti each have attained the 100,000+ downloads mark on the Play Store. 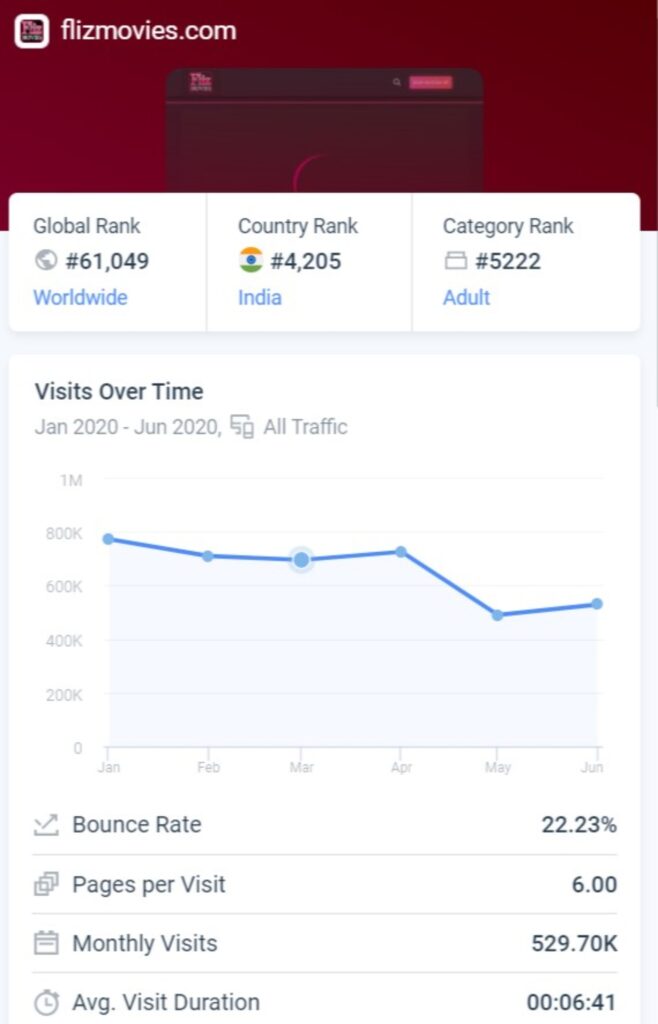 While data for website traffic wasn’t available for The Cinema Dosti, Inc42 spoke to Ayushraj Pandey, the managing director of Cine Prime World, the company that owns The Cinema Dosti. Pandey confirmed that his website had also witnessed a similar trend.

“We’ve seen a 25% growth in video downloads during the lockdown period, and a 67% increase in revenue from subscriptions in the lockdown, as compared to the period before the country-wide lockdown was implemented,” he said. 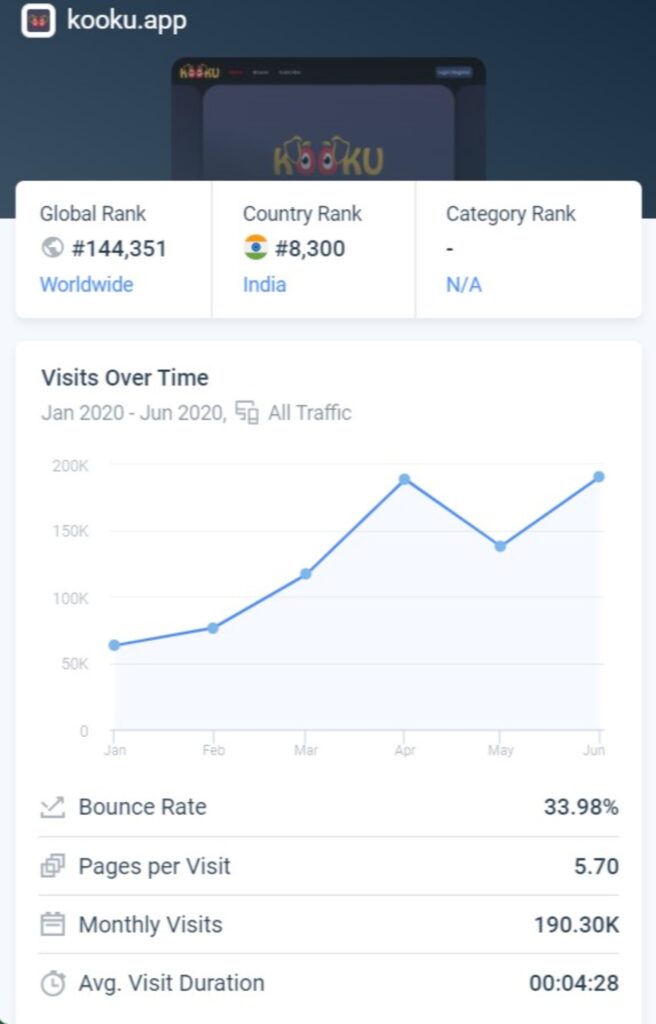 Other interesting insights gathered from the website traffic assessment are about the visits gained by these platforms through social media. For Feneo movies, of the 6,000 website visits that the platform gained through social media from April-June, 90% of them were through Twitter, while 9.5% were from YouTube. A similar trend was visible for Fliz Movies as well, which gained 15,000 visits from social media in the same period, of which, 75% were from Twitter.

Shivank Khandelwal, marketing manager at Feneo Movies, explained the reasons behind the trend. “Twitter allows us to engage with our community rather well. We have a very robust social media strategy, where we upload posters of our web series, films and short films, behind-the-scenes videos from our sets, and interviews with the popular actors and actresses,” he said, adding that being active on Twitter allows the platform to try and meet the expectations of the audience.

Buoyed by the steady viewership for its web series and feature films, The Cinema Dosti is now looking to create content in regional Indian languages.

For a lot of these platforms, the lockdown meant that shooting for ongoing projects had to be stopped. However, what helped them tide over the crisis without incurring a fall in revenue was the existing bank of content which they had already shot. “Our industry always plans for 3-4 months. So we had a bank of content when the lockdown was placed. We began using that existing stock, as well as purchasing more content from other production houses who also have a stock of content ready for release with them. Just as the lockdown opened and the restrictions were lifted, we began shooting in a phased manner,” said Pandey, who works out of Mumbai.

Pandey said that his company is trying its best to ensure that the content released by The Cinema Dosti can’t be viewed by anyone who is below 18 years of age. “We are planning to implement a passcode system, so every time a user logs in, he/she will have to enter the passcode. We want to ensure that kids don’t run into our content. As for censorship, I think more than the government, there are certain groups of people who think we are corrupting the culture by showing ‘bad’ content. But the reality is we are not. This type of content is freely available in so many countries and there’s no stigma attached to it. Here there’s a stigma. But if you are aiming for any kind of progress in the mindset of people, you should realise that these things cannot be stopped and should not be stopped.”