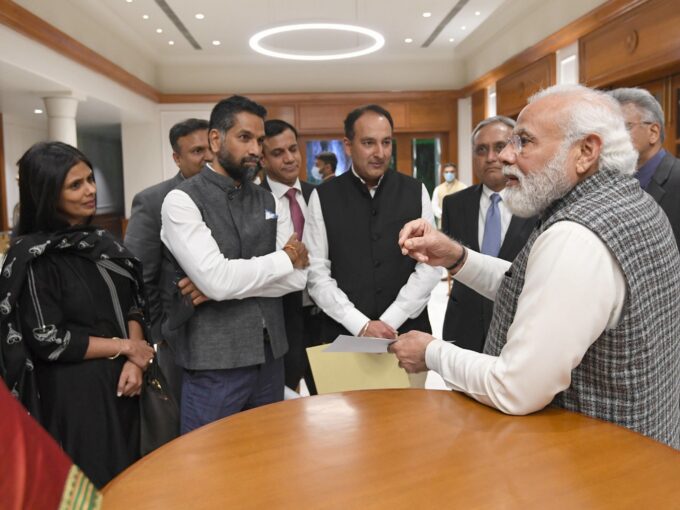 The Prime Minister, Shri Narendra Modi interacting with the representatives of Venture Capital and Private Equity Funds, at Lok Kalyan Marg, in New Delhi on December 17, 2021.

“The intent with which the prime minister was listening to every single input, and the recommendation from the people in the meeting, was very deliberate and was very clear that there are big changes coming in India,” said Sandeep Naik, managing director General Atlantic

The meeting highlighted the latest government-initiated reforms such as the impact of initiatives like PM GatiShakti, an infrastructure project worth INR 100 Lakh Cr, compliance reforms and what’s more that can be done to boost the startup ecosystem in the country.

Besides PM Modi, finance minister Nirmala Sitharaman also attended the meeting. According to various people who participated in the meeting, the PM discussed how to further ease of doing business and ensure a healthy startup ecosystem at home.

Ideas To Promote Technology And Investments

Speaking to Inc42, Siddarth Pai, co-chair of the Regulatory Affairs Committee, IVCA and founding partner of 3one4 Capital said, “At the conference, a number of issues were discussed including how to promote investments, unlock domestic pools of capital, and better ease of doing business in the areas of agriculture, infrastructure, affordable housing & entrepreneurship. We also raised issues to allow Indian startups to go global from India and compete with the rest of the world.”

The PM sought ideas regarding improving investments in spacetech, transitional energy and climatetech, animal husbandry, fisheries, dairy, agritech and infrastructure. He heard all parties and gave keen insights that will help drive the next decade of innovation in India, Pai added.

While Pai termed Modi as startup prime minister, Sequoia’s Anandan spoke of how the rate of investments in Indian startups has grown by 30x.

Anandan said, “The Indian startups ecosystem has come up a long way. If you go back 10 years ago, we had no unicorns. At the end of this year we will have 70 unicorns. Ten years ago we had less than a $1 billion funding going into startups. This year we will have over $30 Bn. I credit a large part of this to be due to the extraordinary focus our Prime Minister Modi and his government has given to startups. The startup movement really started accelerating since 2015 and every year it is going stronger.”

To further help grow the Indian startup ecosystem, the issue of tax disparity was also raised and discussed.

Crypto was raised at the end of the meeting where it was communicated to the investors that the Indian government is already working on regulatory issues regarding DeFi, NFT and crypto.

The Indian government had earlier listed the Crypto Bill to introduce during the ongoing winter session of the parliament. However, the Bill is yet to be approved by the Union Cabinet and is now likely to be introduced only during the Budget Session of the Parliament.