India Can Become A Global Drone Hub By 2030: Jyotiraditya Scindia

India Can Become A Global Drone Hub By 2030: Jyotiraditya Scindia 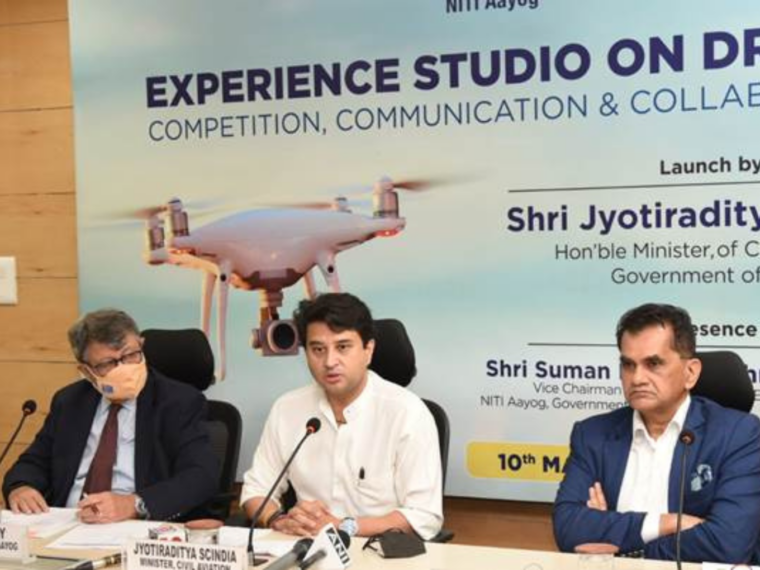 The government will continue to enable drone adoption by easing regulations and through drone programmes such as Drone Shakti and Kisan Drones, Scindia said

Drones are expected to be significant creators of employment and economic growth due to their reach, versatility, and ease of use, said NITI Aayog Vice Chairperson Suman Bery

Civil Aviation Minister Jyotiraditya Scindia said that India has the potential to become a global drone hub by 2030 as it would soon witness a high number of industries embracing drone innovation.

It is imperative to boost the usage of drones in different industrial and defence-related sectors to leverage the benefits of drone technology, Scindia said in a statement.

“We are working towards making drone services easily accessible … This will eventually lead to a revolution that will touch the life of every citizen, thereby realising the prime minister’s goal of an Aatmanirbhar Bharat,” he said at the launch of NITI Aayog’s Experience Studio on Drone, an initiative to promote a collaborative ecosystem aimed at fostering innovation and adoption of drones for public services.

The experience studio shall help promote various applications of drone technology to public and private stakeholders as well as help them fast-track adoption of this technology within their organisations and aid in building a robust drone industry in India, said Bery.

“Drones are expected to be significant creators of employment and economic growth due to their reach, versatility, and ease of use, especially in India’s remote and inaccessible areas,” Bery added.

With the participation of various stakeholders of the drone industry and the government, the sector is set on a path of exponential growth. The government will continue to enable drone adoption by easing regulations and through drone literacy via programmes such as Drone Shakti and Kisan Drones, Scindia said.

Additionally, the experience studio will also act as an anchor for initiating proofs-of-concepts and pilots aimed at solving issues that persist in service deliveries. Smaller focused cohorts will be created through the studio, which will eventually help in mainstreaming these solutions once they are field-ready, said NITI Aayog CEO Amitabh Kant.

The union minister also launched the following challenges, which will be held by NITI Aayog in collaboration with the Ministry of Civil Aviation (MoCA).

The union minister also had an interaction with various stakeholders. They discussed the recommendations made for promoting the sector, encouraging manufacturing and Drones-as-a-Service, providing impetus to innovation, government as an adopter and the next big steps for the sector.

In 2021, NITI Aayog with Amazon Web Services and Intel, set up a Cloud Innovation Centre to help showcase the potential of frontier technologies such as Artificial Intelligence (AI), Machine Learning (ML), Internet of Things (IoT), Augmented Reality and Virtual Reality (AR/VR), Blockchain, Robotics among others.

A week ago, the MoCA invited applications for the Production Linked Incentive (PLI) scheme for drones and its components. It has opened the application window for those manufacturers of drones and drone components, who have crossed the PLI eligibility threshold for the previous financial year.

Earlier in April, the MoCA published a provisional list of 14 PLI beneficiaries based on the financial results submitted by the PLI applicants for the ten-months period (April 1, 2021 to January 31, 2022). These included five drone manufacturers and nine drone component manufacturers.

Besides the PLI scheme, the central government has carried out a series of reforms to make India a global drone hub by 2030.

This includes the liberalised Drone Rules, 2021; the publishing of Drone Airspace Map 2021 that opens about 90% of Indian airspace as a green zone, UAS Traffic Management policy framework 2021; Drone Certification Scheme 2022 that makes it easier for drone manufacturers to obtain a certificate; Drone Import Policy, 2022 that bans import of drones; and the Drone (Amendment) Rules, 2022 that abolishes the requirement of a drone pilot license for drone operations.