India, Brazil Lead The Race In App Downloads During Pandemic

India, Brazil Lead The Race In App Downloads During Pandemic 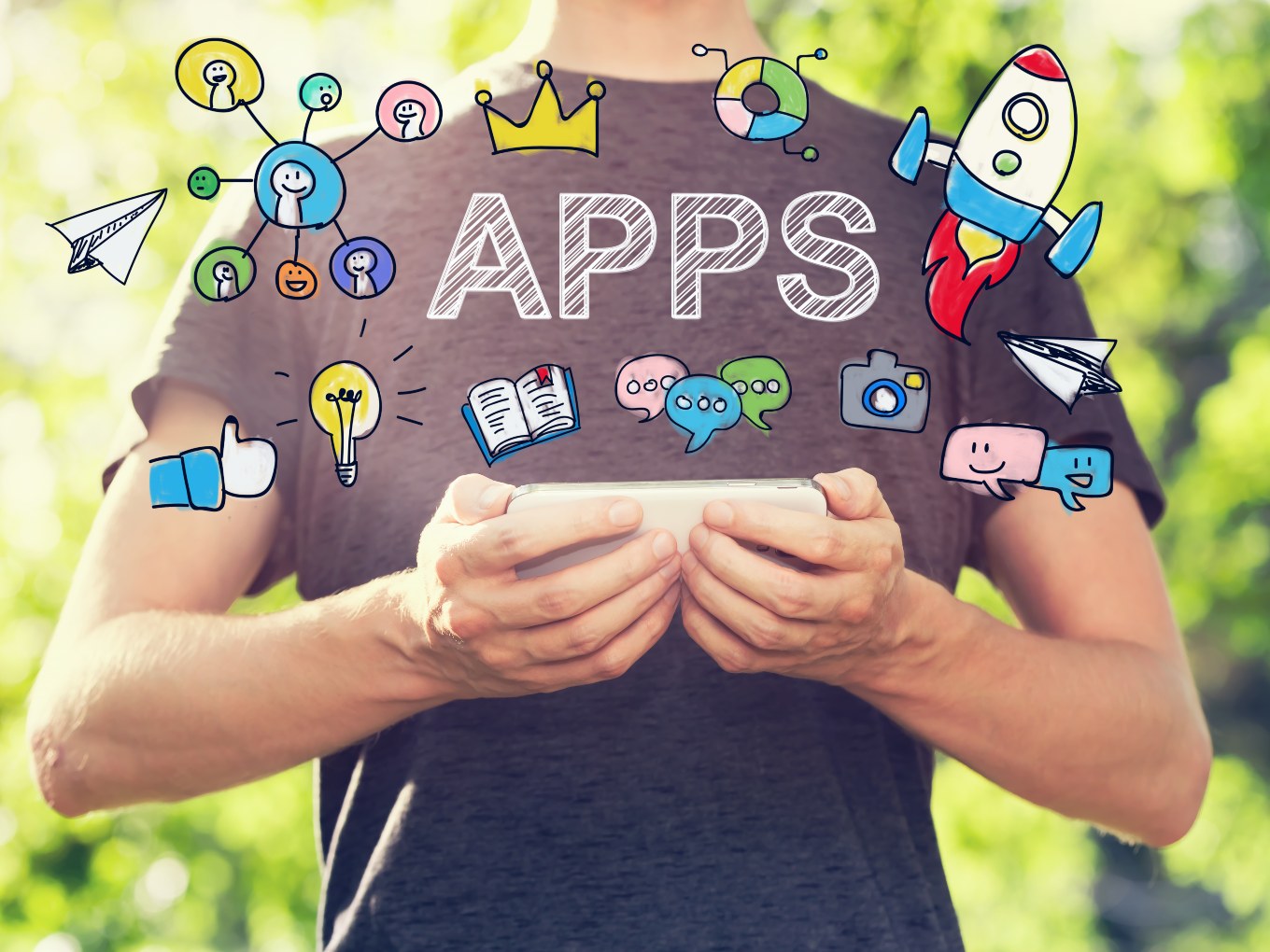 Time spent on apps in India grew 35% in Q2 2020, the most among the countries surveyed

When work from home became the norm and terms like social distancing gained currency, most were left with no option but to escape to the virtual realm. This was evidenced by the downloads for mobile applications witnessing record highs, ever since country-wide lockdowns due to the Covid-19 pandemic came into force. The impact is there to be seen in India, which tops the charts when it comes to growth in app usage during the lockdown.

According to a report by app analytics firm App Annie, time spent on apps in India grew 35% in the second quarter (Q2) of 2020, as compared to Q4 2019. In terms of downloads, India and Brazil were the biggest markets for Google Play Store, while in terms of growth from the previous quarter, Indonesia figures as one of the fastest-growing markets in the world, along with India and Brazil. On the other hand, the USA and China were the largest markets for iOS downloads, with Saudi Arabia also adding to the list for largest markets in terms of quarter over quarter growth.

The growth in app usage in India isn’t a country-specific phenomenon. The report highlights that there was a worldwide 40% year-on-year increase during Q2 2020 in monthly app usage, reaching an all-time high of more than 200 billion hours in April 2020. Moreover, consumer spending in apps also reached an all-time high of $27 Bn in Q2 2020, while app downloads peaked at 35 Bn. India, Brazil and the US were the biggest gainers in terms of average monthly hours spent on non-gaming apps. 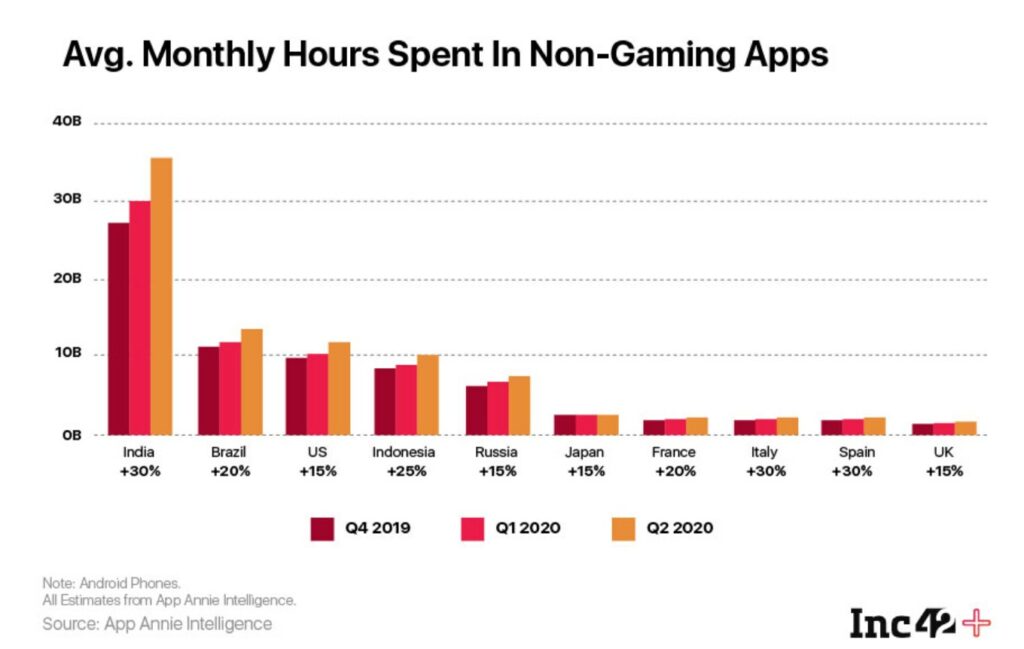 In India, apps which catered to the needs of people while home isolation and quarantine measures were in place, figured on the best performers chart. Video conferencing app Zoom, short video sharing app TikTok, and the government’s app for Covid-19 contact tracing and self-assessment, Aarogya Setu, were some of the best-performing apps in India during the lockdown.

However, these download estimates, released by the US-based app analytics firm SensorTower, were for the time period between March 1 and April 10. Since then, India has issued an advisory against Zoom for being a threat to data privacy of users. In June, India banned 59 Chinese apps, including ByteDance-owned TikTok, on similar grounds, citing threats to data privacy of users.

Ever since the ban on TikTok, India has seen an unprecedented surge in demand when it comes to short video sharing apps, often billed as ‘Indian alternatives to TikTok’. Inc42 had reported previously that Trell, Mitron and Chingari witnessed a surge in downloads after the ban on TikTok in India. The latest charts for top-grossing apps in India, by SensorTower, still reflect that trend. Although, other apps in the segment have assumed the spotlight. As of July 13, short video sharing applications such as ‘Moj’, ‘Likee Lite’, ‘MX TakaTak’ and ‘Roposo’, among others, were placed in the top five in the charts. It is worth noting that Likee, owned by Chinese company JOYY, was one among the 59 Chinese apps banned by the centre on June 29. However, ‘lite’ versions, with limited functionality and no tech support, of some of the banned apps are still available for download on the Play Store. 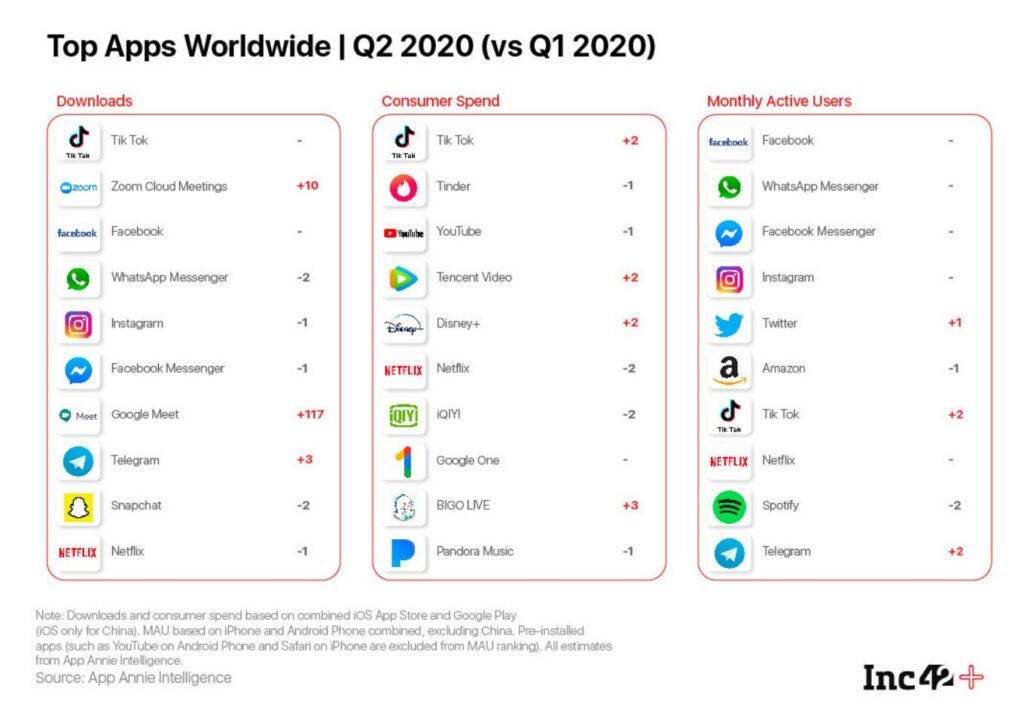 As for gaming apps, India and Brazil were again, the biggest markets both in terms of game downloads and the largest growth of absolute downloads quarter over quarter. As for gaming genres, casual, action and board games performed well, given the fact that families holed up together during the lockdown took to board games rather well. This is demonstrated in the performance of Ludo King, which entered the top five most downloaded and top three most used games globally during the lockdown. As of July 13, Ludo King still figures at No 2 in the ‘Games’ category of the top charts for India by SensorTower. The app has around 16 Mn downloads worldwide.

The App Annie report also talks about how mobile app developers would need to align their strategies to the new normal, in order to sustain the momentum they’ve gained during the pandemic. Video conferencing apps such as Zoom were bound to receive a boost during the lockdown, but the real challenge would lie in reinventing the app and coming up with new features and offerings in the video conferencing space, once people start moving out of their homes and travelling to their offices for work.