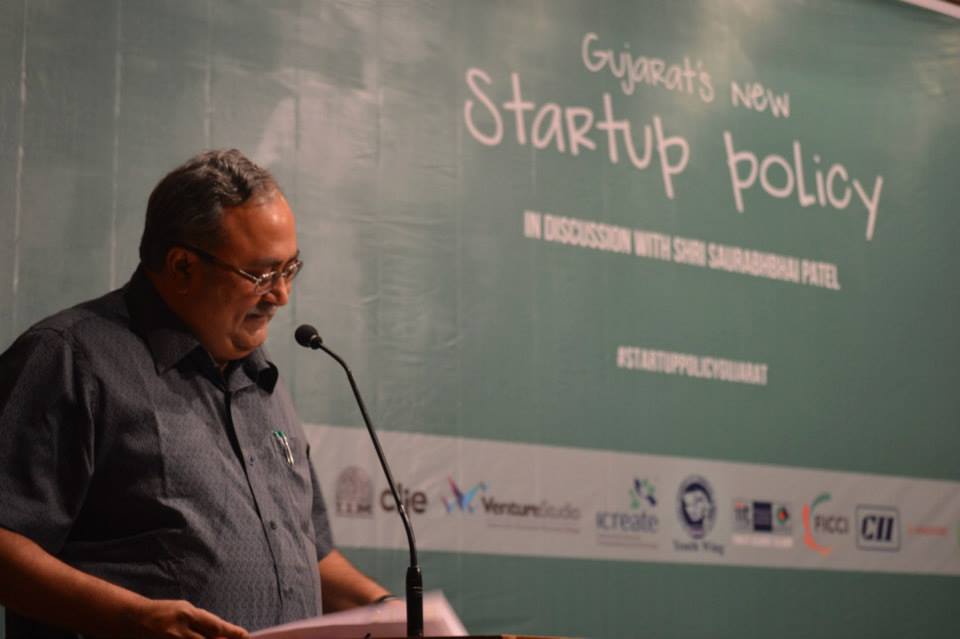 At an event on ‘Gujarat New Startup Policy’, State Finance Minister, Saurabh Patel accepted that the State’s startup policy focuses more on the manufacturing startups and needs to be modified for the benefaction of  whole startup community.

Minister responded positively to the criticism from the panel of young  startups, incubators and institutions. The panel suggested provision for social enterprise, decentralization of power, seed fund for startups, and co-working space for startups.

To which, Finance Minister replied with assurance that amendments will be made in the next two months.

Gujarat Government in January,2015 had announced exclusive policies for startup, making Gujarat the second Indian state (after Andhra Pradesh) to do so.

Once both innovator and institute, start working on a project following benefactions were promised-

Talking about the policy, Sunil Parekh, Founder of Ahmedabad Global Shapers, said, “Gujarat has always been entrepreneurial and with this new startup policy, there is going to be an explosion in its startup ecosystem. Seed fund is very important for a budding entrepreneur, with the expected changes and better execution of policy, Gujarat will see many successful innovators.”

Technology driven entrepreneurship is transformative, disruptive, democratic and in every way useful to the world. In addition to their feedback on startup policy, panelists also spoke about the overall Startup ecosystem of Gujarat –

Addressing the state of Incubators in Gujarat, Hiranmay Mahanta (GTU Innovation Council) said, “Rather than competing locally, why not collaborate and compete globally. Incubators should  be agile and have a fast track time bound approach. Special focus should be given on pre-incubation, incubation and accelerator infrastructure.”

Talking about the Gujarat startup ecosystem, Prof. Basant (CIIE) said, “Gujarat should start promoting intensive technology based start-ups. Most importantly, there is an absence of multidisciplinary body, which provides an infrastructure where all the enthusiasts from diverse background can come together and discuss their ideas. That’s what predominantly provided by the Ivy League colleges, and that’s why it gives the highest number of Start-ups to the world.”

Jatin Chaudhary of Echai, concluded elegantly with – “Let’s develop an ecosystem for the all the ordinary people who have ideas to make things happen. And we should not only go gaga over people who are famous and already successful. Let’s promise to help first time innovators and become the early adopters of the products they develop. It’s the most crucial thing to make or break a startup. Let’s not just rise, let’s co-rise.” Jatin is also working on a venture named  Co-rise, under which 100 entrepreneurs will contribute 1K each every month to support fellow entrepreneurs.

Ritam Bhatnagar, Founder of wWhere, says, “After witnessing the energy of all the enthusiasts present in the auditorium, I’m optimistic that the ‘Start-up’ will replace ‘Dhandha’ as the new love of all the Gujarati millennials.” Which does seem true with the on-going enthusiasm and interest of Gujarat’s Finance Minister. According to reports, “Saurabh Patel has decided to call an urgent open forum to seek suggestions from experts and startups.”