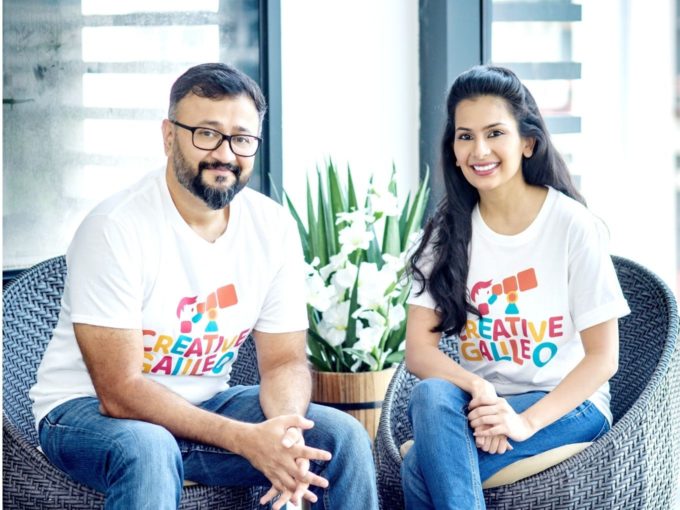 Founded in 2020 by Prerna Jhunjhunwala and Nikhil Naik, Creative Galileo operates in the early learning space. The startup’s product “Little Singham”, an early learning mobile application with a gamified interface targeted at children between the ages of three and ten, has already recorded more than 4 Mn downloads since its launch in 2020, edtech startup claimed.

Reliance Animation and Bollywood director Rohit Shetty share the rights to the IP for ‘Little Singham’ which is a derivative of Rohit Shetty’s movies “Singham” and “Singham Returns. Creative Galileo has also banked similar deals with other production houses to bring their characters to life.

“We have licensed Shaktiman, Golmaal Jr. characters, characters from Amar Chitra Katha and Shemaroo. Soon, we are also going to release stories based on Bahubali and some internationally famous characters”, said Prerna Jhunjhunwala, CEO and Founder of Creative Galileo, in an interview with Inc42.

When asked if she wanted to build an ‘early learning multiverse’, she agreed and spoke about how she was inspired by the Marvel universe

During an interaction with Inc42, Jhunjhunwala mentioned that the pedagogy of Creative Galileo is based on Howard Gardner’s theory of Multiple Intelligences. The startup uses a multimedia approach to help different kinds of learners.

Though a majority of the downloads are from Indian users, 10% of the app’s downloads come from Nepal, UAE, the USA and other countries. The United Arab Emirates and the United States host large Indian diasporas.

“In India, early and preschool learning is very unstructured. There are many edtech platforms but they cater to older audiences.”, remarked Jhunjhunwala. She continued, “But how can you educate children if they don’t have very strong fundamentals? That’s what we are trying to change at Creative Galileo”.

Last week, edtech decacorn Byju’s raised $296 Mn in a funding round led by Oxshott Venture Fund. The decacorn has been on an acquisition spree this year, spending $2.6 Bn in acquisitions so far this year.

According to Inc42 Plus analysis, 2021 Q3 witnessed a massive uptick in edtech funding compared to previous quarters. Edtech startups raised over $17.1 Bn — the highest amount raised in a single quarter since we began recording deals in 2014.

Edtech startups made up about 8.5% of all the startup funds raised this quarter, with three edtech startups entering the unicorn club during the quarter: upGrad, Eruditus and Vedantu. The edtech market is estimated to grow 3.7x in the next five years, from $2.8 Bn in 2020 to $10.4 Bn in 2025.

We have updated the article to accurately reflect the founders’ names and the target audience of the startup’s application.