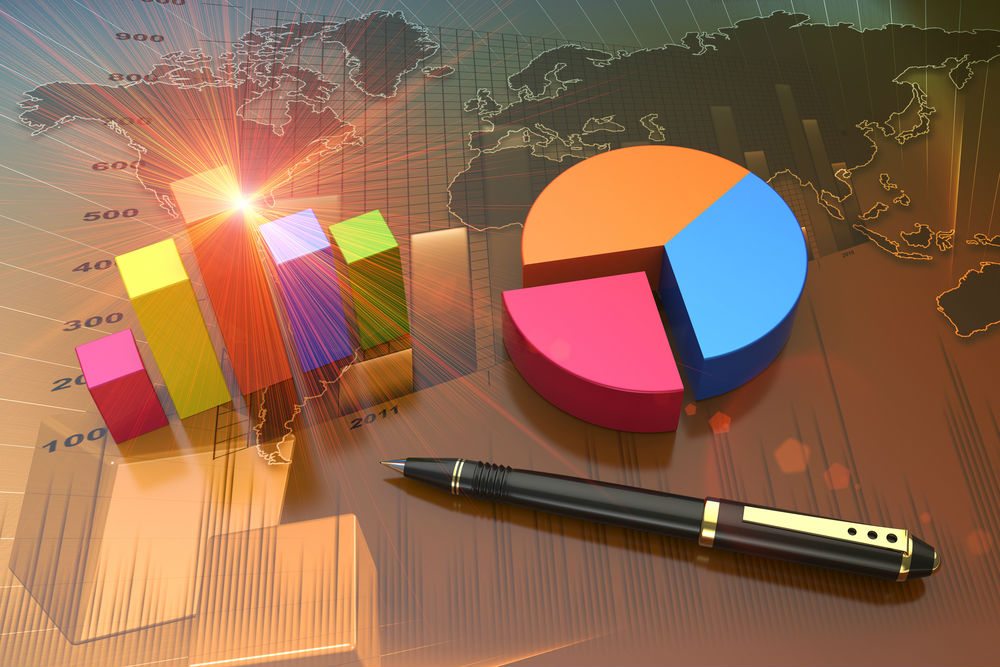 Unlike 2015, that saw the most fast-paced year in India’s startup world, 1st Quarter of 2016, showed a change in dynamics in the Indian startup ecosystem.

2015 was like a gold rush: Easy to raise funds (in large amounts), as long as you were tackling problems that are trending according to major venture capital firms (both Indian and global) and Uber for X or the me-too startups. The Q1 (2015) witnessed a whooping 1.3 Bn (excluding undisclosed) investment i.e. 93% increment in investment as compared to Q1 of 2014.

In 2015, on an average three to four startups were launched every day. This led India to secure the third position in the world in terms of the number of startups, 4200 and counting. Entrepreneurs started to expect very high valuations with ideas that at best were replicas of already successful ideas elsewhere. No defensibility, weak business metrics, and entrepreneurs who were largely opportunistic, were entering these spaces (hyperlocal services like food delivery, grocery and laundry). And, these entrepreneurs were able to raise money from investors at quite high valuations.

Raising money became the trend, not the exception. No wonder experts have been skeptical about India’s startups being in a bubble. A deceleration was observed in the ecosystem by the end of Q4 of 2015, the deal activity was certainly lower.

Amidst the recurring flames of uncertainty revolving around the investment scenario in India, the often-so-talked bursting of the bubble; Indian startup ecosystem showed a considerable good recovery at the start of this year. The opening quarter of the year 2016 has observed a significant uplift in terms of deal volume and total investment size as against last quarter of year 2015. But, it remained relatively timid (24%) as compared to the disruptive growth observed in 2015 (almost 93%) in terms of deal value. A total of 285 deals were observed. 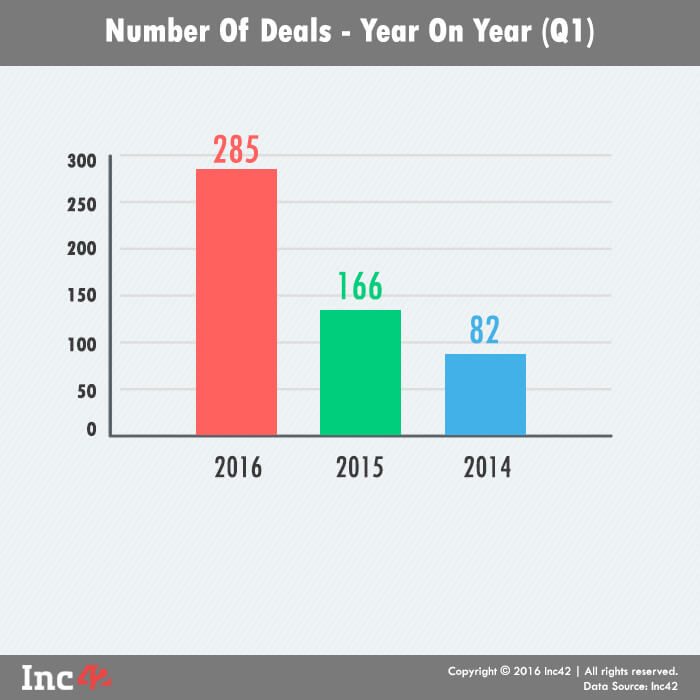 Not surprisingly, startups working on a marketplace model primarily ecommerce received the highest amount of funding given its capital intensive nature of business, at $442 Mn. Ecommerce was closely followed by TravelTech, Education sector, and so on. Ibibo group raised the highest funding amount in Q1 so far, a staggering $250 Mn.

In terms of number of deals Accel Partners(5), Blume Ventures(5) and Saif Partners(5) were major VC funds, while, Ratan Tata (9) took the position of most active angel investor, Mohandas Pai(9) and Traxn Labs invested in over 7 startups.

In addition to the investments, the three month period saw over 38 acquisitions.

This report by Inc42, analyses the current scenario and emerging trends across the various dimensions that define the Indian startup ecosystem, and gauge India’s position as a global startup hub that is becoming attractive for investors, VCs, & corporates. We tried to compile all the rising startups that acquired funding in the first quarter of 2016. The analysis includes 285 startups that have collectively raised USD 1.6 Bn (of which 125 startups did not disclosed there funding amounts). 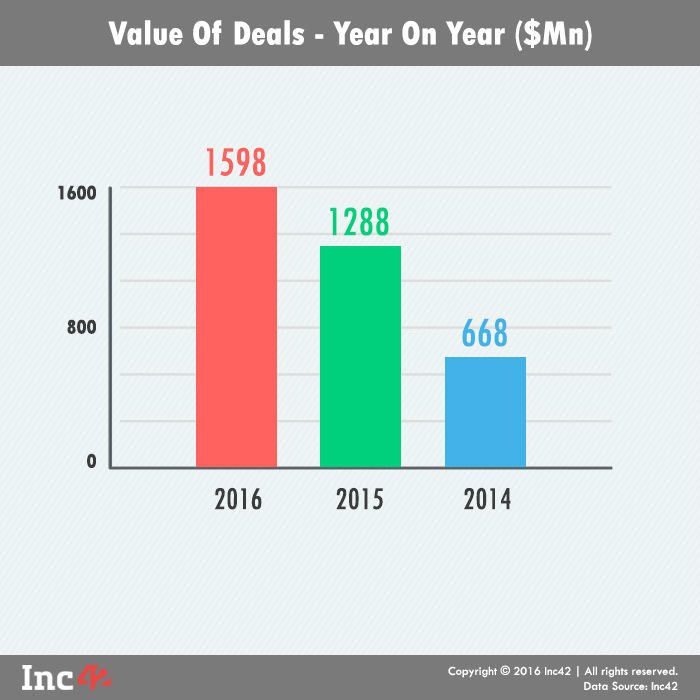 Although, February 2016 shows the highest number of deals made, but, January comes out leading in terms of Deal value. CarTrade and MakeMyTrip secured $145 Mn and $180 Mn respectively, in the month of January, becoming two of the highest funded startups in Q1 of 2016. 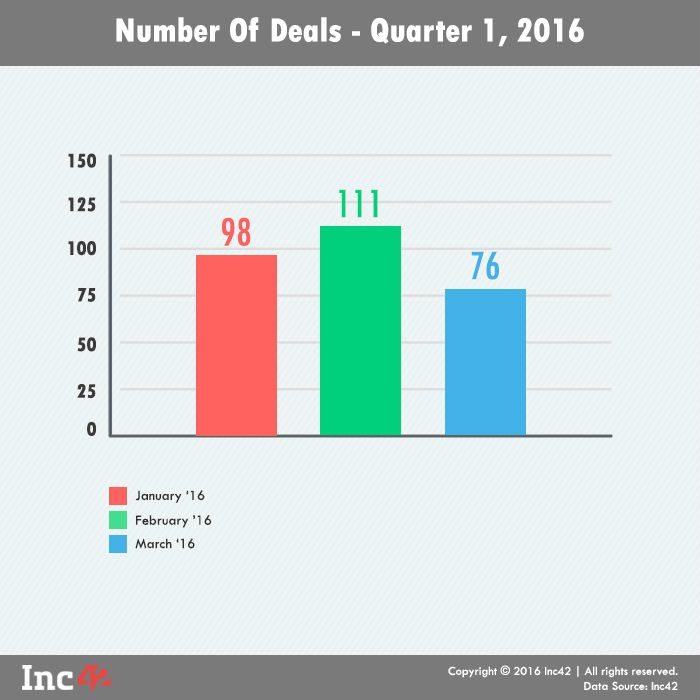 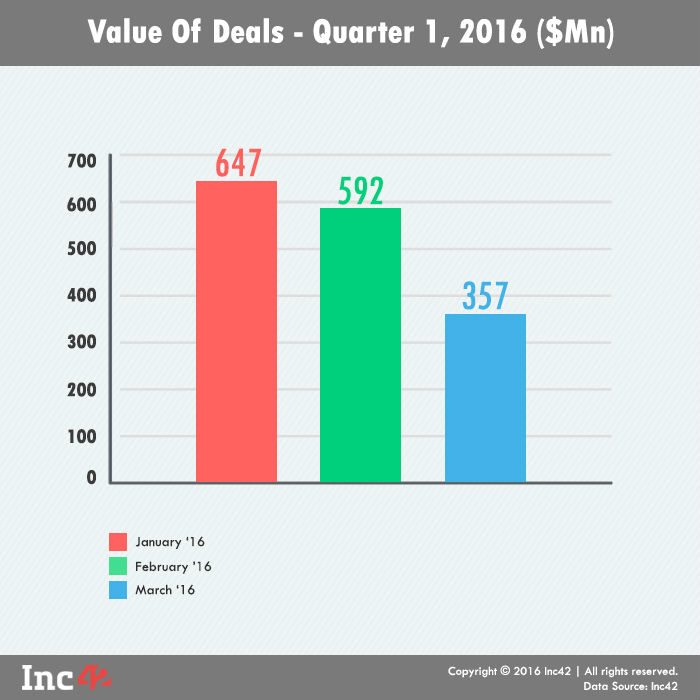 A peek into the funding stages for startups in 2016 Q1 suggests 193 of 285 deals (74% of total number of Deals) were seed and pre-series funding but the major chunk of funding amount (about $1 Bn) was invested in Late Series funding, Credit Line and Debt financing. 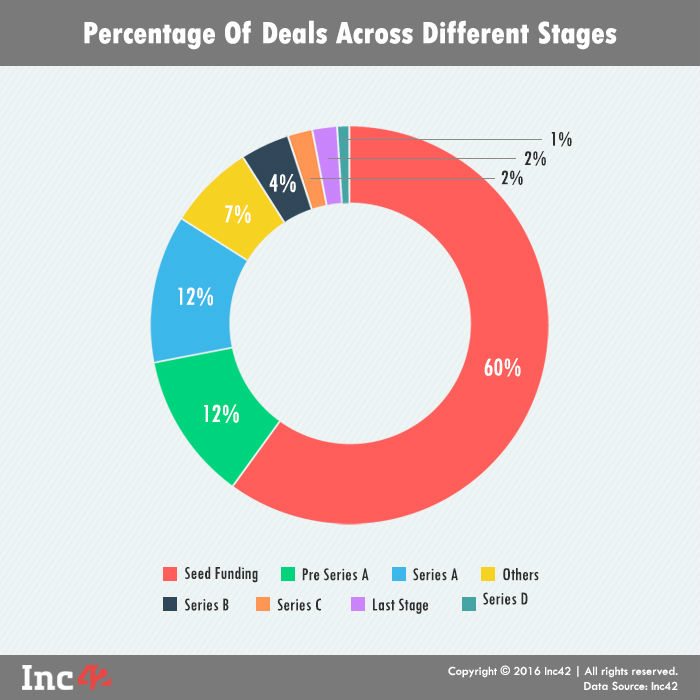 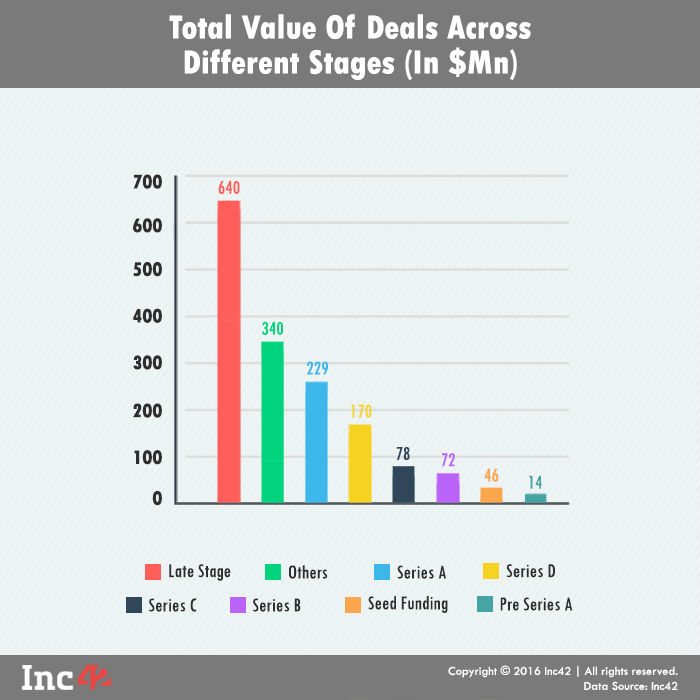 Looking into the sectors of investments in the startup ecosystem for 2016 Q1, Ecommerce bagged the maximum number of deals as well as maximum value of deals.

SaaS & Enterprise and HealthCare gained interest contributing to 11% and 10% of the total number of deals. 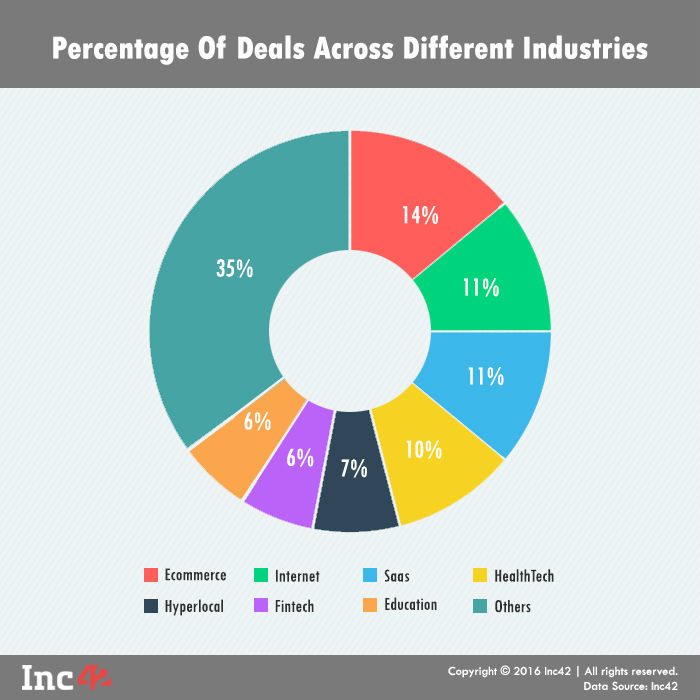 The following graph compares the value of deals only for Startups that received funding in Ecommerce, Budget Accommodation, Travel, Automobile, SaaS and Hyperlocal. 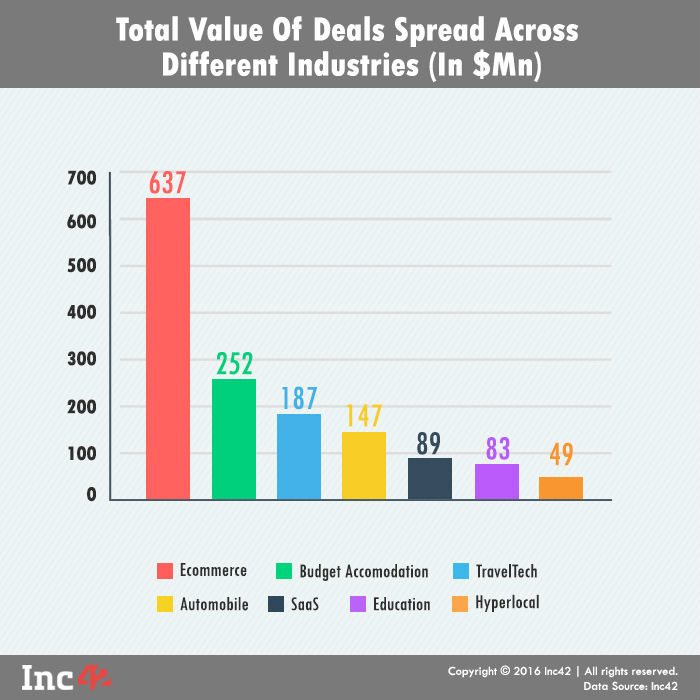 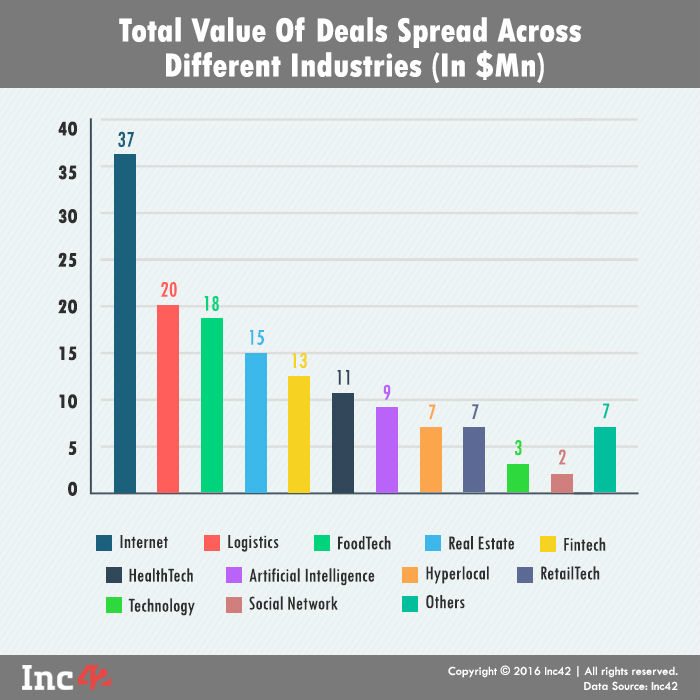 Marketplace and Hyperlocal startups have been observed to be the most trending and potential sectors of the ecosystem in 2016. Given the wide interest shown and investment made, it is essential that we look into the sectors individually.

Marketplace startups has been classified into Ecommerce and Aggregators. A total of 60 Marketplace ventures raised a total funding of $654 Mn. The marketplace sector is responsible for 22% of the deals and 41% of the funding amount. Snapdeal and Car Trade raised the highest amount $200 Mn and $145 Mn respectively. 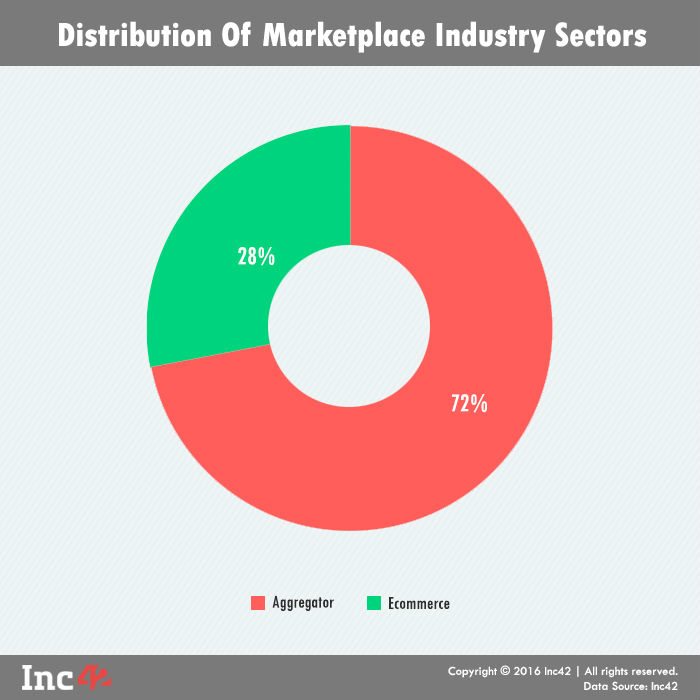 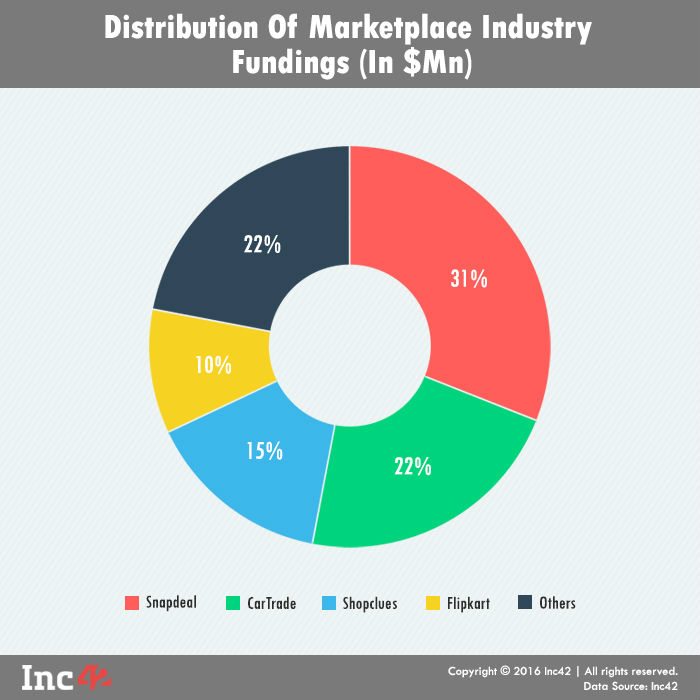 Hyperlocal startups has been classified into Delivery and Services based on the mode of operation. The Hyperlocal sector is responsible for 7% of the deals and 3% of the funding amount. Out of these MagicPin and DriveU raised the highest amount $3 Mn and $1 Mn respectively. 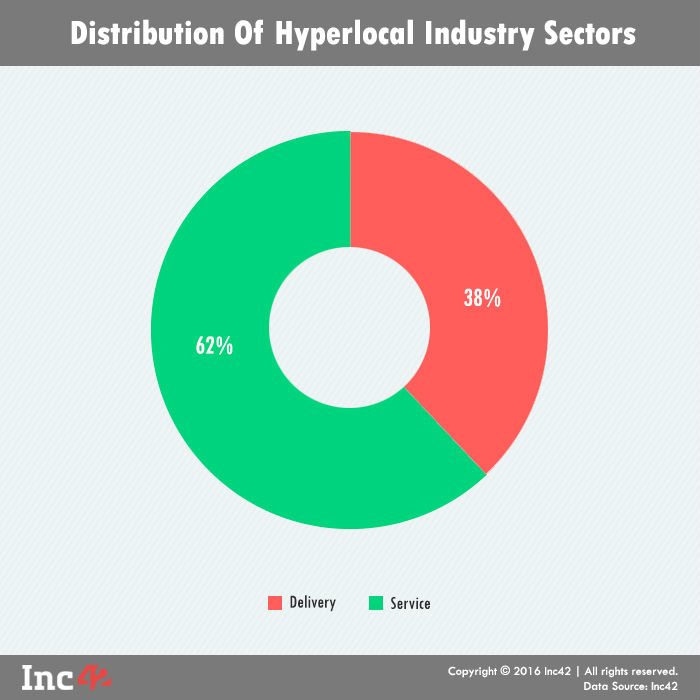 Business Model wise, investors are observed to be investing highly in B2C business models. It is observed to have raised 89% ($1.4 Bn) of the total disclosed funding amount. 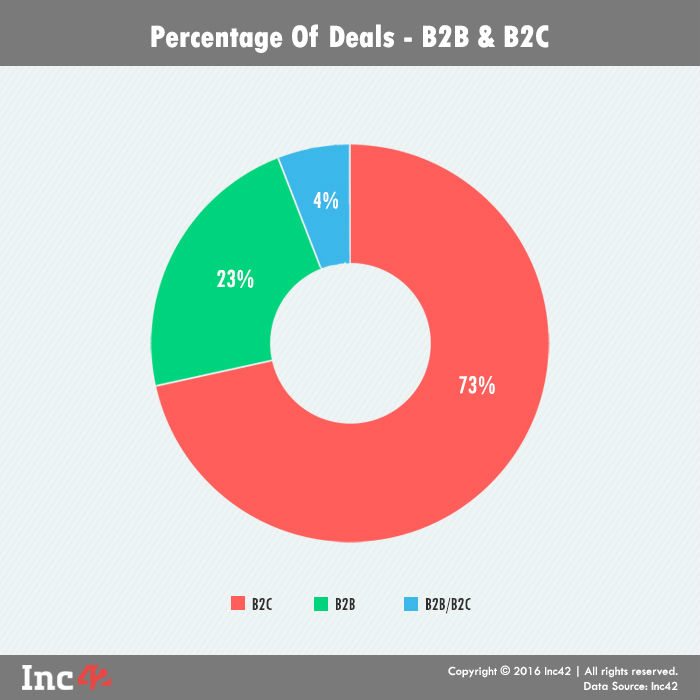 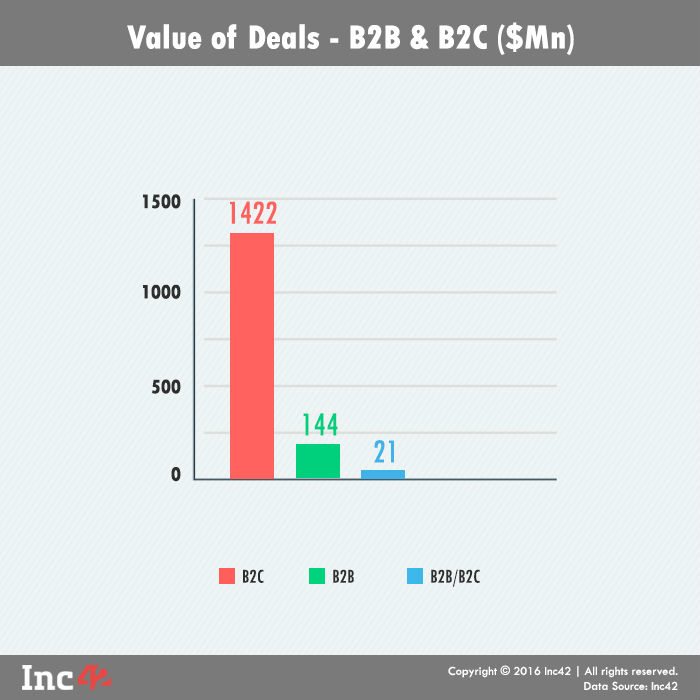 Bangalore, Mumbai and Delhi/NCR continues to be the top startup hubs contributing to total of 85% of Q1 funded startups. Pune, Hyderabad, Ahmedabad and Jaipur are getting popular in terms of successful startups. 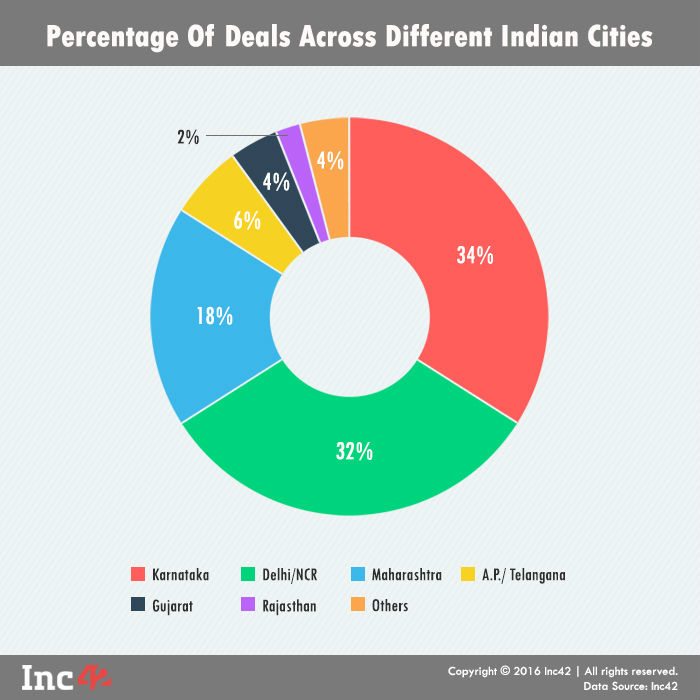 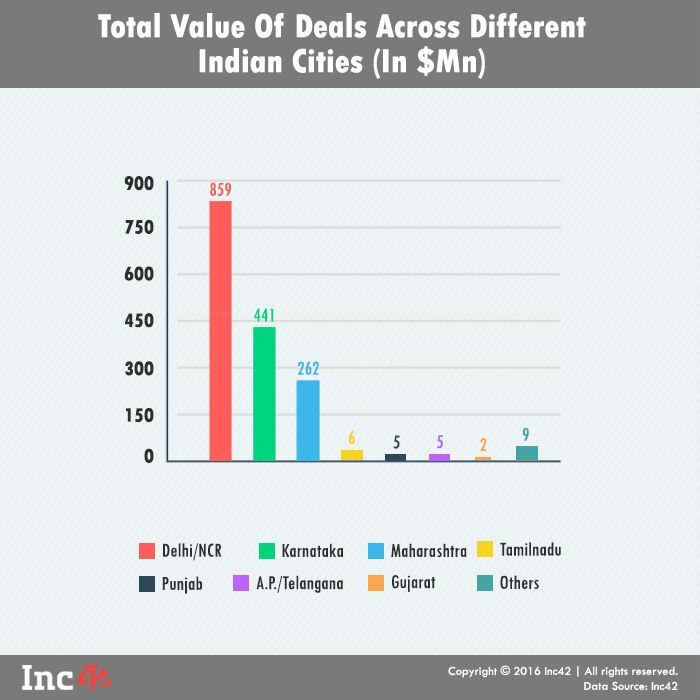 Moving on to investors, in 2016 Q1, number of investors both VCs and Angels investing in startups has increased. The Q1 of 2016 observed deals from around 200 VCs and 320 Angels. Ratan Tata and Mohandas Pai were the most active Angels with 9 deals each. Accel Partners, Blume Ventures are the major VCs with 5 deals each. 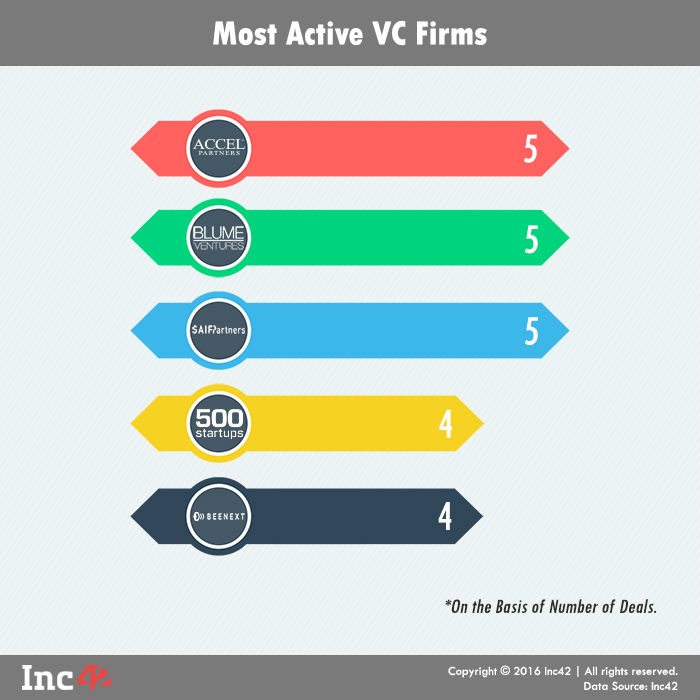 Active Angels: In terms of number of deals Ratan Tata (9) took the position of most active angel investor followed by Mohandas Pai(9) and Arihant Patani(5) 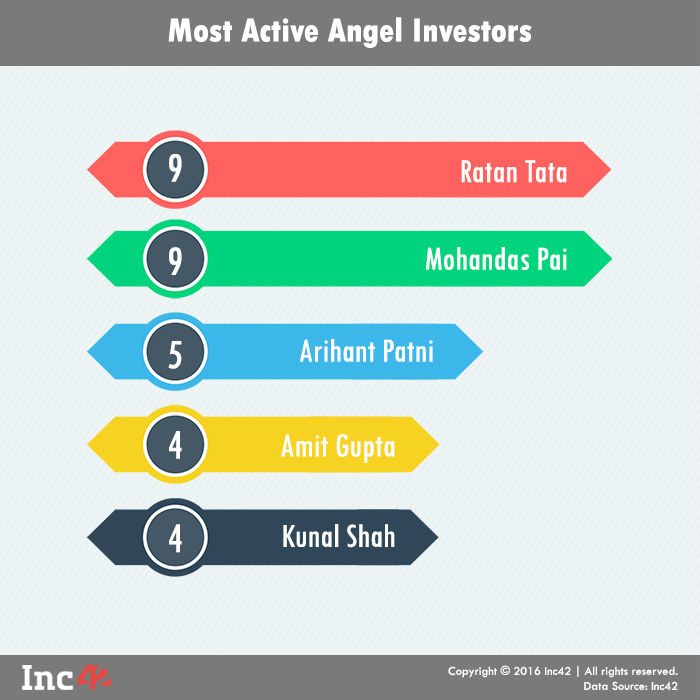 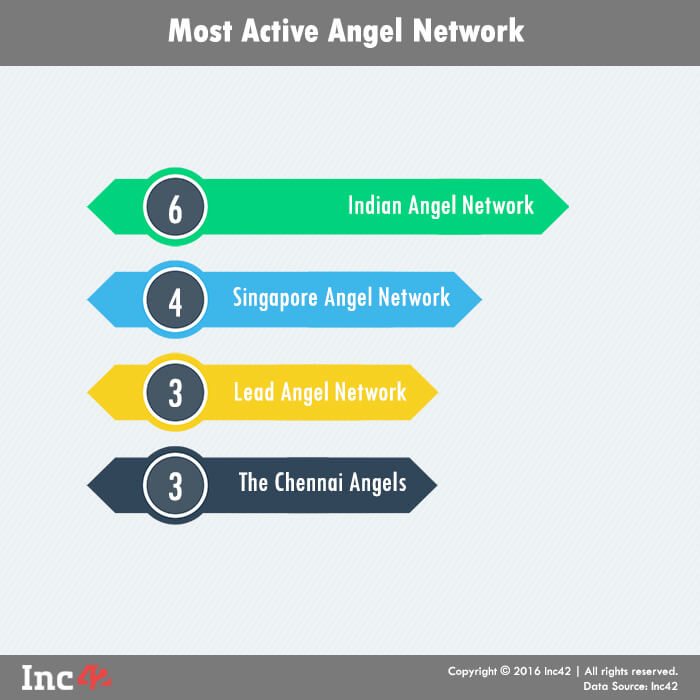 2016 Q1 saw a total of 38 acquisitions, which is quite high, as compared to 18 acquisitions in Q1 of 2015. One of the biggest acquisitions was observed when Quikr acquired CommonFloor at a colossal $200 Mn in a all-stock deal. Closely followed by AllGo Embedded System being acquired by Viston Corporations for $30 Mn.
Following Graph showcase the major sectors of Startups that has been acquired: 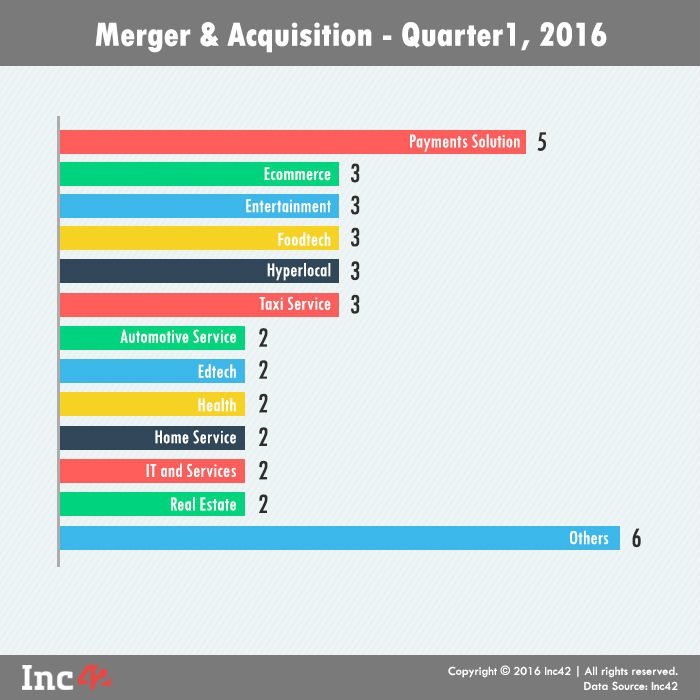 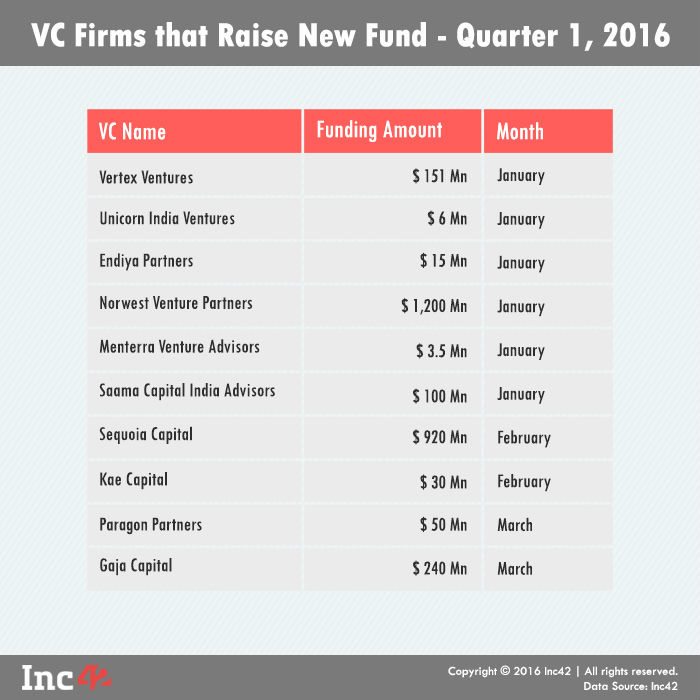