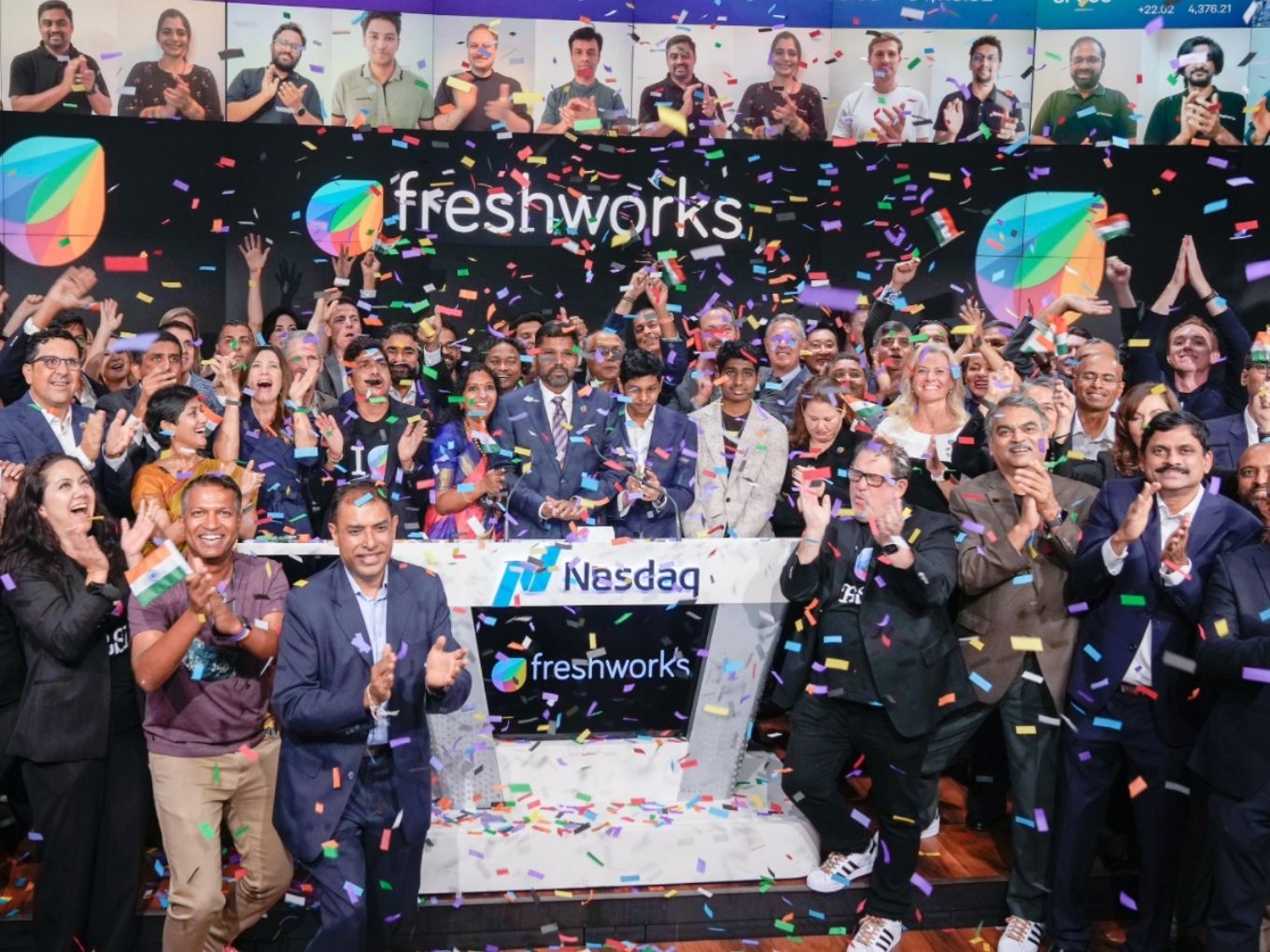 “Freshworks is the company that wasn’t supposed to win. Whether we could differentiate ourselves in crowded markets, or compete with larger players, or build a global SaaS company from India, the doubts were always there. And people were not shy about telling me! Over the years, I’ve heard it all…”

Freshworks cofounder Girish Mathrubootham, who will ring the bell today as his company goes public, says in the introduction to the company’s prospectus for its public offering.

It perhaps sums up the journey of the Chennai-founded company, which now has its headquarter in San Mateo, California. Freshworks was just a startup competing against established tech and IT giants, but today Freshworks itself is a SaaS giant and an inspiration for many of the SaaS startups that have followed it in the Indian market.

The company’s Nasdaq listing today (September 22, 2021) signals another coming-of-age for the Indian startup ecosystem. It will become the first Indian SaaS startup to list on Nasdaq and follows the likes of travel companies MakeMyTrip and Yatra on the second largest stock exchange in the world. Freshworks shares will be listed under the symbol FRSH.

Founded by Girish Mathrubootham and Shan Krishnasamy in 2010, Freshworks offers a suite comprising software for customer management, which includes an artificial intelligence-powered chatbot and messaging platform for customer support, as well as call centre-based solutions for customer service resolutions.

The platform also allows you to automate routine, repetitive tasks and manage various HR functions such as hiring, onboarding, and tracking employee data.

Freshworks has priced its US initial public offering (IPO) well above the target range to raise $1.03 Bn, valuing the company at $10.13 Bn. The Accel and Sequoia Capital-backed company has priced its 28.5 Mn shares at $36 a piece, and had earlier expected to raise $969 Mn at the higher end of the price band, but adjusted its price band in the run up to the IPO to $32-$34 per share. Looking to take advantage of the red-hot US capital markets over the past 18 months, which saw the public listings of DoorDash, Coinbase, Coursera, DigitalOcean among others, Freshworks is joining the IPO parade. Investors are buoyed by the digital transformation wave across sectors in the wake of the pandemic.

The big advantage for horizontal SaaS platforms such as Freshworks is that hybrid workplaces will require a bigger dependency on software for productivity monitoring and project management. The company would be looking to capitalise on this wave of hybrid workplaces in the long run, particularly as it looks beyond the US market for growth.

As a veteran in the Indian SaaS industry, Mathrubootham has not only been an influential founder but also a mentor for entrepreneurs, and has invested in over 50 companies over the years. His personal journey has also inspired an entire generation of founders in Chennai and other parts of India.

This is another reason why the Freshworks IPO is highly anticipated among Indian founders and investors. Mathrubootham’s leadership is backed by a number of industry veterans leading Freshworks at its global offices. 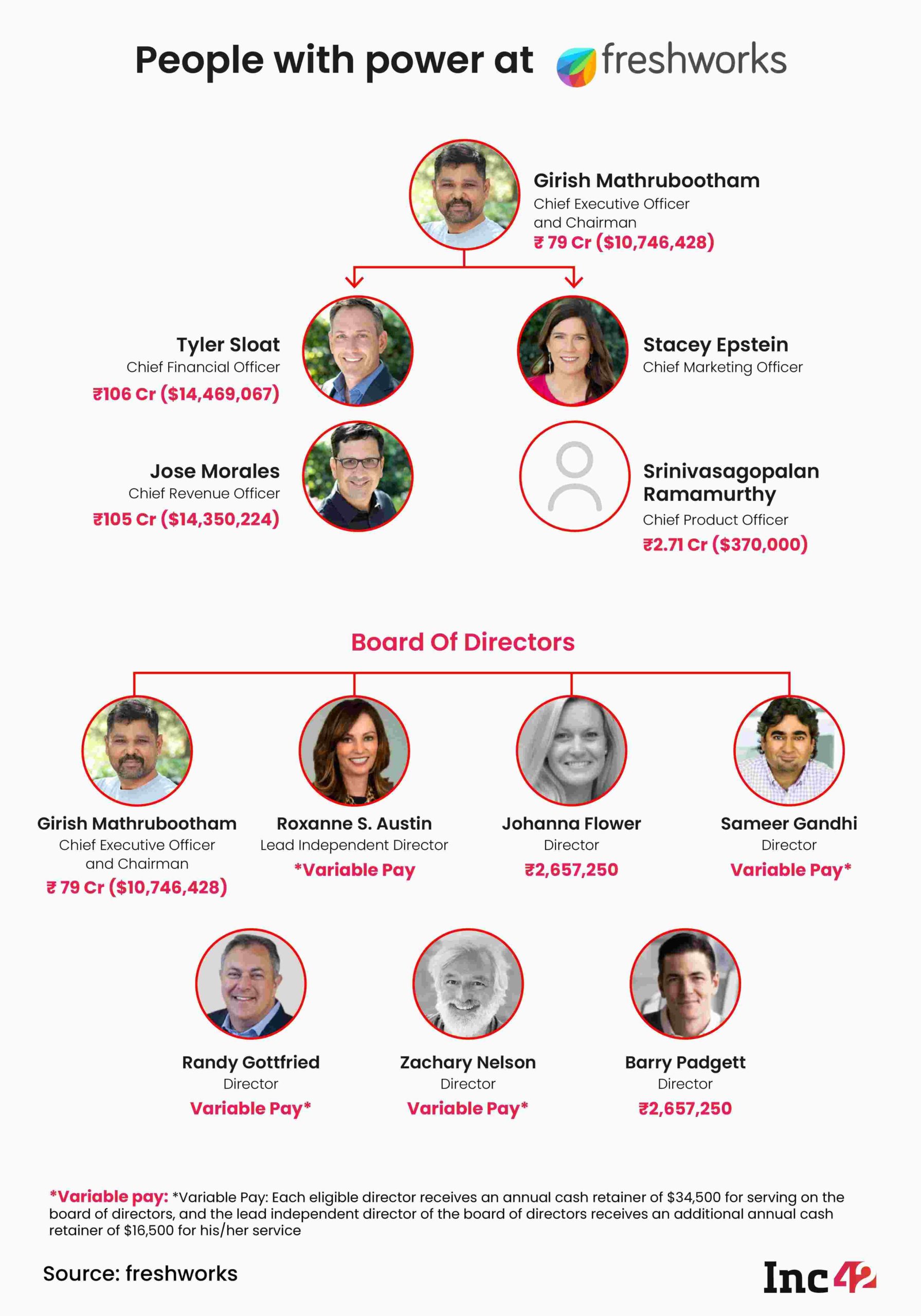 Freshworks will compete with the likes of Salesforce, Zendesk, Oracle, SAP, Atlassian among other companies which offer similar IT services management, customer support and CRM solutions, which together offer a $120 Bn market opportunity by 2025, according to IDC.

In its prospectus, Freshworks says it has 50,000 paying customers in 10 years of operations. Given such a large customer base, one expects outliers in terms of revenue, but according to the company, no customer’s contribution to revenue exceeds 10% of its total revenue. 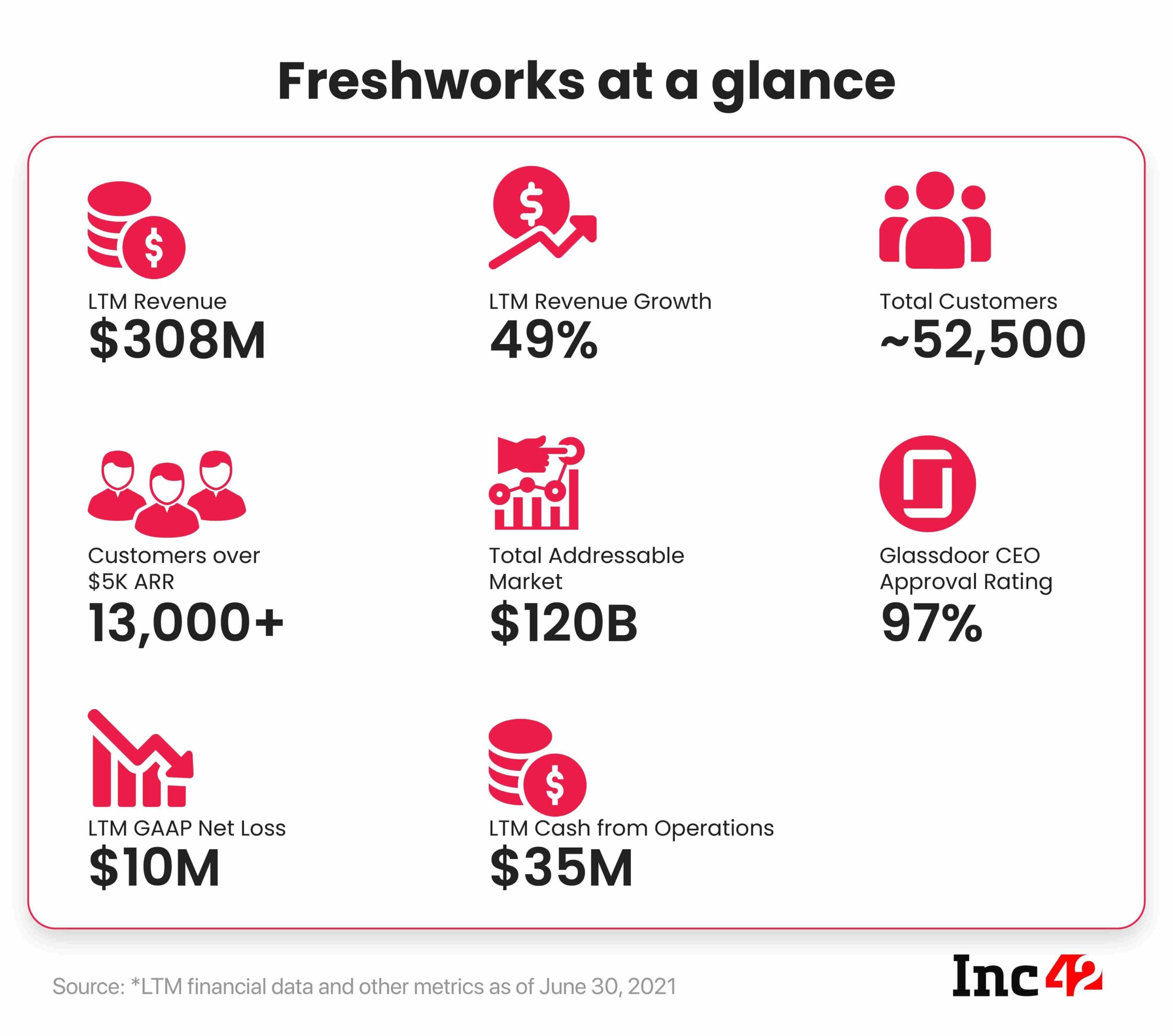 The contribution of these high-value customers to the ARR has grown from 82% to 84%, which indicates that the newest customers are paying more than the average customer. This coupled with massive increase in revenue and reduction in losses makes Freshworks one to watch in the US stock market.

The company’s profit before tax H1 2021 increased by 54.17% on a YoY basis and gross profit margin grew narrowly by 0.64%, but Freshworks cut its administrative and R&D costs to show a significant improvement in EBITDA and net income margins.

As per reports delving into the Freshworks IPO, a significant advantage is seen in the profit margins thanks to Freshworks servicing high-value clients in the US, Europe, Middle East and African regions from India — 45% and 40% of all customers are located in the US and EMEA respectively. 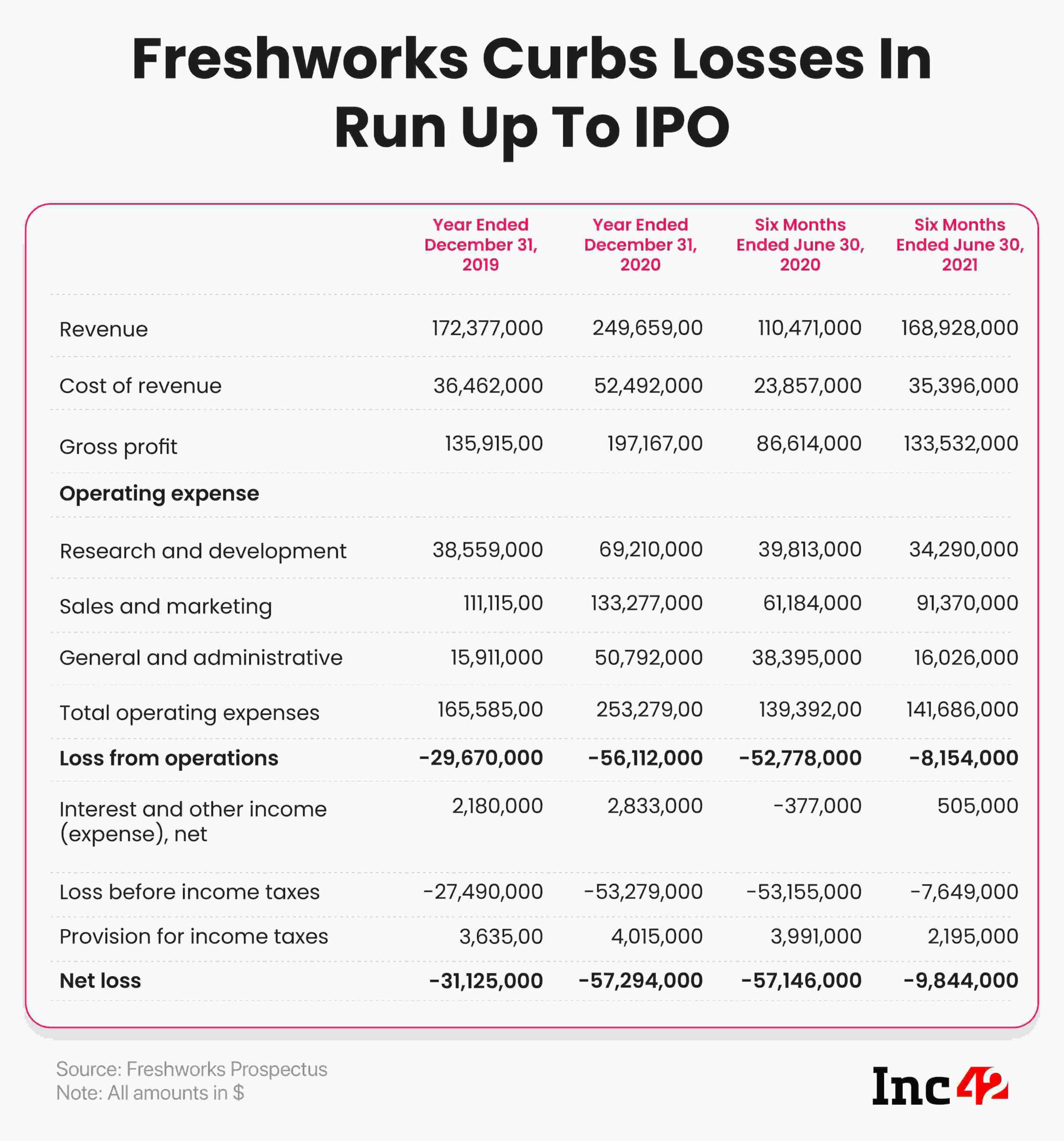 Freshworks’ profit margin of over 79% is considered a major strength among SaaS startups and quite rare for an IT startup. Analysts expect the company to improve this further by trimming advertising and promotion costs, which currently accounts for 54% of total revenue through sales.

This needs to be optimised, despite the fact that free cash flow has almost tripled in the first six months in 2021, year-on-year.

Given the high competition in this space, Freshworks has outlined some of the challenges that it will face in the near future. Primary among the risks is the fact that the company may not be able to attract new customers, convert customers to paid subscriptions or upsell the usage of products among its customer base.

“Our business depends substantially on our customers renewing their subscriptions and purchasing additional subscriptions from us. Any decline in our customer retention would harm our future operating results,” Freshworks’ prospectus said.

Freshworks competes with giants such as Salesforce, Zendesk, Oracle, SAP and others that have massive scales and the financial wherewithal to sustain a pitch battle with Freshworks. They also hold pricing power, which could sway much of the new business that have been attracted by Freshworks in the medium term.

“We weren’t founded in Silicon Valley. We didn’t target large enterprises. We didn’t have access to a been-there-done-that talent pool. We designed our products for the people actually using them. We offered a ‘fresh’ approach relying on efficient, product-led, low-cost and low-touch sales; and we targeted massive, underserved markets,” Mathrubootham added in the company’s prospectus.

Of course, now Freshworks is very much seen as a Silicon Valley entity by the tech world at large, but Mathrubootham’s quote is a reminder that it’s still Indian at heart.

And that is arguably why we are most excited about the Freshworks IPO. There’s no doubt that the Indian startups that are going for an IPO in India will certainly be a big litmus test of the public listing ability of Indian tech companies.

The Freshworks IPO represents the global ambitions of the Indian startup ecosystem and its potential success will once again shine a light on Indian startups and is likely to boost the perception of Indian tech.

Mathrubootham has declared in the past that one of his idols is Indian film superstar Rajinikanth and even the Freshworks IPO plan was inspired by the actor and codenamed ‘Project SuperStar’. And just like Rajini’s films, we hope the IPO makes a debut with a bang!